The Global Suppression of Protest 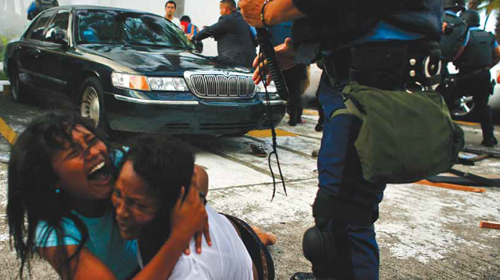 This week the International Network of Civil Liberties Organizations released a report about the crackdown on peaceful protests in democracies around the world – the tactics include excessive (sometimes deadly) police force and the criminalization of dissent. This is the introduction to the study, “Take Back the Streets,” which details cases of suppression in the U.S., U.K., Canada, Israel, Egypt, Argentina, South Africa, Kenya, and Hungary.

In June 2010, hundreds of thousands of Canadians took to the streets of Toronto to peacefully protest the G20 Summit, which was taking place behind a fortified fence that walled off much of the city’s downtown core. On the Saturday evening during the Summit weekend, a senior Toronto Police Commander sent out an order – “take back the streets.” Within a span of 36 hours, over 1000 people – peaceful protesters, journalists, human rights monitors and downtown residents – were arrested and placed in detention.

The title of this publication is taken from that initial police order. It is emblematic of a very concerning pattern of government conduct: the tendency to transform individuals exercising a fundamental democratic right – the right to protest – into a perceived threat that requires a forceful government response. The case studies detailed in this report, each written by a different domestic civil liberties and human rights organization, provide contemporary examples of different governments’ reactions to peaceful protests. They document instances of unnecessary legal restrictions, discriminatory responses, criminalization of leaders, and unjustifiable – at times deadly – force.

The nine organizations that have contributed to this publication work to defend basic democratic rights and freedoms in nine countries spread over four continents. Across the regions where our organizations operate, States are engaged in concerted efforts to roll back advances in the protection and promotion of human rights – and often, regressive measures impacting the right to protest follows in lockstep. And across the globe, social movements are pushing for change and resisting the advancement of authoritarian policies; dozens, hundreds, thousands or hundreds of thousands of individuals are marching in the roads and occupying the public space. In rural areas across the global south, there are a variety of demands, calling for access to land or resisting the exploitation of natural resources that threaten indigenous peoples’ or peasants’ territories. In urban settings, housing shortages or lack of basic services spark social protests and upheavals. Even in developed economies, there are disturbing tensions provoked by the contraction of the economy, globalization policies and the social and political exclusion of migrants. Students’ movements all over the globe are demanding the right to education.

History tells us that many of the fundamental rights we enjoy today were obtained after generations before us engaged in sustained protests in the streets: the prohibition against child labor, steps toward racial equality, women’s suffrage – to name just a few – were each accomplished with the help of public expression of these demands. If freedom of expression is the grievance system of democracies, the right to protest and peaceful assembly is democracy’s megaphone. It is the tool of the poor and the marginalized – those who do not have ready access to the levers of power and influence, those who need to take to the streets to make their voices heard.

Unfortunately, these are also rights that are frequently violated. Our organizations have witnessed numerous instances of direct state repression during protests: mass arrests, unlawful detentions, illegal use of force and the deployment of toxic chemicals against protesters and bystanders alike. At other times the state action is less visible: the increased criminalization of protest movements, the denial of march permits, imposition of administrative hurdles and the persecution and prosecution of social leaders and protesters.

This publication attempts to address some of the gaps in public debate about the state responsibility toward the protection of the right to protest and assembly. We relate nine case studies from the nine countries about how governments have responded to diverse kinds of protest and public assembly.

The cases, originating from Argentina, Canada, Egypt, Israel and the Occupied Territories, Kenya, Hungary, South Africa, the United Kingdom and the United States, each present a unique state reaction in a unique domestic context. They relate instances of excessive use of force resulting in injury and death, discriminatory treatment, criminalization of social leaders, and suppression of democratic rights through law, regulation and bureaucratic processes. And despite the fact that all the cases come from different countries, with different substantive debates and different social contexts, a number of common threads are identifiable.

A number of case studies document disproportionate and illegal use of force by police, resulting in hundreds of wounded and dead. The American Civil Liberties Union details the case of police brutality against protesters in Puerto Rico, recounting violent beatings and low-flying helicopters spraying toxic chemicals over hundreds of peaceful demonstrators. The Egyptian Initiative for Personal Rights details six days in November 2011, when the police shot thousands of tear gas canisters directly into the crowds, resulting in numerous deaths due to asphyxiation, in addition to deaths caused by live fire and shotgun pellets. In one case, the police shot tear gas into a building and then sealed all the doors and windows, suffocating the people inside. In Kenya, police beatings and shootings around the 2013 election left several dead and dozens more injured. And in Argentina, the Centro de Estudios Legales y Sociales tells of police indiscriminately firing live ammunition to disperse of some of the poorest families from Buenos Aires, who had descended from the overcrowded outskirts of the city to peacefully occupy an open piece of land.

These cases collectively illustrate the use of lethal and deadly force in response to largely peaceful gatherings seeking to express social and political viewpoints. The deaths and injuries are caused both by the use of firearms with live ammunition, and also through the use of so-called “nonlethal” weapons – a term that we intentionally reject. The numbers of dead and injured due to the inhalation of tear gas and other less-lethal weapons clearly demonstrates the urgent need to clarify and expand the norms that regulate the use of these law enforcement tools. It is also striking that these documented acts of violence and repression are frequently compounded by a lack of accountability. Justice systems in multiple countries appear unwilling or unable to undertake the serious investigations necessary to hold powerful state actors accountable for their actions.

Several other chapters document the persecution or criminalization of those social leaders and community members that organize demonstrations. The Association for Civil Rights in Israel, for example, relates the struggles of community activist and West Bank resident Bassem Tamimi, who has spent over 13 months in jail for peaceful, expressive activities.

In Canada, the Canadian Civil Liberties Association sets out how a student leader was put on trial for contempt of court – and found guilty – after telling the media he thought it was legitimate for students to picket universities. And in Argentina, the social leaders who were essential to establishing dialogue with authorities during a critical point of social crisis were afterwards prosecuted. Their participation in official negotiations was used as evidence that they were capable of controlling others involved in the event, and that they had instigated others to commit crimes.

These cases demonstrate how the justice system not only frequently fails to provide accountability for the illegal acts committed by law enforcement, but can also at times act as a repressive force toward demonstrators and social organizations. Too often, those individuals who are courageous enough to lead peaceful opposition or voice dissent must also be brave enough to face subsequent prosecution and detention from government authorities. It is difficult to calculate the chilling impact such prosecutions have on current and future leaders of social movements.

The post-9/11 context has also made a mark on governments’ reactions to societal dissent. Many countries have introduced broad anti-terrorist laws, and as time passes there is an increasing risk that these tools of interrogation, arrest, search and detention will be redirected toward peaceful political activity and domestic dissent. The case study from Liberty provides one example of how the United Kingdom’s counterterrorism laws were applied to peaceful anti-arms protesters. It was only during Liberty’s case challenging the abuse of these search powers that the UK public discovered that the whole of Greater London had been subject to a multiyear, high-level terrorism designation giving police officers significantly enhanced powers of search and detention. The fact that this discretionary power was disproportionately and arbitrarily used against blacks, Asians, and individuals from other visible minority communities should not come as a surprise.

Finally, the case studies from the Hungarian Civil Liberties Union and South Africa’s Legal Resources Centre demonstrate how the very existence of laws regulating the exercise of the right to protest can facilitate the denial of rights and discrimination. In both countries, community groups had to go to the courts to force the government to facilitate their basic democratic rights. Laws that give authorities a measure of discretion can be applied or interpreted in a manner that restricts or limits the impact of the expression or actions of social groups – and in particular those groups that are vulnerable or likely to be subjected to discrimination. It is clear that, when faced with the potential disruption or inconvenience that is inevitably caused by protest, governments too often react by seeking to ban the demonstration, rather than accommodate it.

All the cases presented show the integral role played by civil society organizations in protecting these fundamental democratic rights. Each organization that has contributed to this publication recognizes that a democratic society must not only tolerate, but actively facilitate, social participation and protest. And each organization actively operates on the premise that, no matter the underlying cause or issue, individuals’ and groups’ right to protest must be protected. Dissenting voices must be heard. And they must be given the space – both legal and physical – to do so.