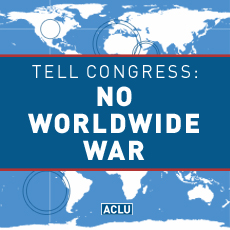 The House just passed the National Defense Authorization Act (NDAA), including a provision to authorize worldwide war, which has no expiration date and will allow this president — and any future president — to go to war anywhere in the world, at any time, without further congressional authorization. The new authorization wouldn’t even require the president to show any threat to the national security of the United States. The American military could become the world’s cop, and could be sent into harm’s way almost anywhere and everywhere around the globe.

Before the vote, the House debated an amendment that would have struck the worldwide war provision. That amendment was introduced by a bipartisan group of representatives: Rep. Justin Amash (R-Mich.), Rep. John Conyers (D-Mich.), Rep. Walter Jones (R-N.C.), Rep. Barbara Lee (D-Calif.), Rep. Jerrold Nadler (D-N.Y.), and Rep. Ron Paul (R-Texas). Given the enormity of the proposed law, you’d expect the House to debate the amendment to strike it extensively, but that’s not what happened. The amendment was debated for a total of 20 minutes. That’s right. Twenty minutes to debate whether Congress should hand the executive branch sweeping worldwide war authority.

The vote on the amendment took place earlier this afternoon, and it failed on the House floor by a vote of 187-in favor to 234-opposed. Check the vote here.

But not to worry, all of your efforts to bring the importance of the new law and the amendment to strike it to your representatives’ attention have not been in vain — we promise. Today’s vote marks the end only of the first stage in our opposition to an authorization of endless worldwide war for the president and to be honest, we came out looking pretty good.

Though it is a bit awkward to celebrate a loss, a margin of defeat of only 47 votes on a provision that most people were unaware of as recently as two weeks ago is a big step forward. The momentum is on our side. And the Obama administration helped efforts to turn the tide when it issued a threat earlier this week to veto the NDAA if it contained such broad sweeping language for worldwide war.

Your answers to the call for action and the expedient work of a bipartisan group of members of Congress and their staff have our opposition movement very well positioned as we prepare for the next hurdle—the Senate.

The Senate Armed Services Committee is scheduled to begin its markup of the NDAA beginning on June 13. Watch for updates as we continue on this important issue.