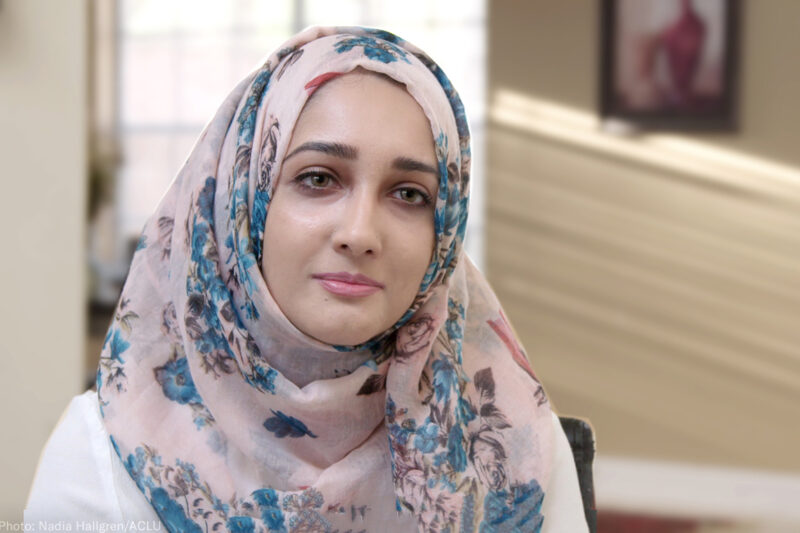 This piece was originally published by The Washington Post in August.

I realized my life had entered a new phase while crossing into the United States from Canada in September 2016.

“You both have to come inside,” the border officer said to my husband and me. “Inside” was an empty and cold warehouse with rows of wooden benches. They confiscated our keys and phones, and when I asked for my baby’s diaper bag from our rental car, they escorted my husband as they spoke into their radios: “Suspect is approaching car.”

I had already been detained on the same trip from my home in Orlando, including during a layover in Los Angeles that caused us to miss our flight to Portland, Ore. I had rationalized those stops: They’re just doing their job; maybe it’s a random search like they said.

But this time, they kept us overnight. As the hours passed in that warehouse, my 6-month-old baby howled and shivered. After we left, we went straight to the airport, only to endure extra screenings again on the return trip.

I started researching the Transportation Security Administration’s “secondary security screening selection” process to understand why I was being stopped every time I got on a plane or came back home to the United States after a foreign trip. Nearly two years later, I am still being stopped and searched, and I still don’t know why.

I’m a graduate student at Harvard University, and missed flights and travel anxiety were beginning to affect my schoolwork. So with the help of the American Civil Liberties Union, I have filed a formal complaint with the Department of Homeland Security asking that I be allowed to travel freely, which is my constitutional right.

Am I being stopped because I am Muslim, or because my family once traveled to Iran to visit a holy shrine? Is it because of my criticism of U.S. policies on the multimedia website I run to raise awareness about injustices around the world? Maybe it’s all three. Federal officers have asked me about my writing and religion, both of which are protected by the First Amendment.

In response to my redress inquiry, DHS sent me a frustratingly unhelpful letter: “[We] can neither confirm nor deny any information about you which may be within federal watchlists or reveal any law enforcement sensitive information. However, we have made any corrections to records that our inquiries determined were necessary.”

It added: “We cannot ensure your travel will be delay-free.”

Now I have a routine every time I travel: Arrive at the airport more than three hours early. Explain to the airline agents at the help desk that they must call Washington to clear me for travel — a process that can take an hour. Try to be patient when TSA officers escort me from the boarding area to the gate for a private security check. Allow them to rummage through my things and grit my teeth as they pat me down multiple times. Don’t bother telling them about parts of my body that are sensitive from surgery, since they’ll be rough regardless. Run to the boarding area and don’t make a scene as they pat me down again, trying not to feel embarrassed as other passengers watch. Stay as brave as possible.

And above all, be prepared for something new. Once, they brought the explosives unit — several armed men — because of sticker residue on the back of my computer. Another time, they brought a team of dogs to search me. Once, they took my crying 2-year-old through the screening process by himself because he clung to my husband during a pat-down search. Recently, they took me to a private room and forced me to open my pants and show them my underwear. They hid their badges when I asked for their names.

My husband and I bonded over our love for travel when we got married, but now our adventures have been greatly diminished. What once was a dream to take our children around the United States and abroad has been reduced to short car trips. I’ve contemplated many times giving up my studies at Harvard because of the anxiety and humiliation that come with the inevitable harassment on my flights to and from Boston.

America is my home. It’s where I was raised, got married, had my children and built a life. Its greatest qualities of freedom, liberty and opportunity have undoubtedly shaped the person I am today. But these values are slowly diminishing, and those liberties are being taken away from us little by little. I fear one day we will be unable to recognize it as the place we called home.