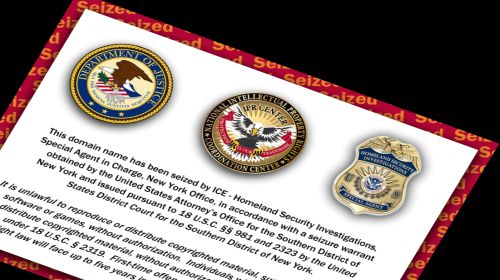 The ongoing controversy surrounding domain name seizures under “Operation In Our Sites” seems to be reaching new heights. DHS launched Operation In Our Sites in 2010 to combat online piracy and the proliferation of counterfeit goods on the Internet. Since then, Immigration and Customs Enforcement (ICE) has shut down over 758 websites allegedly involved in the sale or distribution of counterfeit goods or illegal copyrighted works.

To shut down a website, ICE obtains a seizure warrant from a magistrate judge ordering the website’s registry operator to transfer control of its domain name to ICE. Once ICE has control over the domain name, it redirects traffic to a new landing page, which indicates that the website’s domain name has been seized. To see an example, go to the landing page for Rojadirecta.com, a website that has been under ICE’s control since early 2011 for allegedly linking to unauthorized video streams of live sporting events.

ICE has been shutting down websites allegedly involved in illicit online activities on very little legal basis, without any adversarial hearing, and without providing notice until weeks or months later. Court orders permitting domain name seizures are made on the basis of ex parte affidavits, meaning that only the government presents evidence and website operators have no opportunity to be heard or respond to allegations until after their websites have been shut down. As several legal scholars have pointed out, this violates the Fifth Amendment’s due process clause and the First Amendment.

Last month, a federal district court in Los Angeles unsealed records related to the domain name seizure of a popular hip-hop blog called Dajaz1.com, on copyright infringement grounds. The court records revealed that the seizure was based on assertions by the RIAA that Dajaz1 had linked to four pre-release music tracks in 2010. Authorities finally returned the domain name 13 months later without filing civil or criminal charges. During that time, however, the site was redirected to a government landing page while the site’s owner and his attorney were unable to respond to the allegations, because the court record was sealed. The website’s owner contends that seizing his blog for linking to four songs “is equivalent to seizing the printing press of The New York Times because the newspaper, in its concert calendar, refers readers to four concerts where the promoters of those concerts have failed to pay ASCAP for the performance licenses.”

Another contested issue is whether such seizures constitute prior restraint, in violation of the website operators’ First Amendment rights. Prior restraints on speech and publication, where the government suppresses speech before its legal status is formally adjudicated, are the most serious and the least tolerable infringement on First Amendment rights, and are therefore treated as “presumptively unconstitutional” according to longstanding Supreme Court doctrine.

Moreover, the majority of websites seized under Operation In Our Sites do not even actually host allegedly illegal or infringing content. Most of these websites merely contain links to other sites that host such content in “discussion forums, chat rooms, blogs, and other forms of traditional, democratic speech” that traditionally benefit from First Amendment protection. Nevertheless, ICE indiscriminately targets websites that only link to those accused of hosting illegal content.

The only plausible theory of indirect criminal liability for copyright violations would rely on something called accomplice liability, which requires much more stringent evidence to establish than contributory liability doctrine in civil law. Although no federal court has ever imposed accomplice liability in a criminal copyright prosecution for merely linking to infringing materials, most domain name seizures carried out under Operation In Our Sites are erroneously premised on the grounds that such activities constitute criminal copyright violations.

Rep. Zoe Lofgren (D-CA) questioned Attorney General Eric Holder about domain name seizures and the Dajaz1 incident in a recent House Judiciary Committee oversight hearing. Holder did not appear to be familiar with the case, but stated the Department of Justice’s (DOJ) position that these domain names are subject to seizure under civil forfeiture law because they are used to engage in criminal activities.

The ACLU is a vocal advocate against the virtually limitless scope of civil forfeiture law, which allows authorities to seize any property even marginally related to the commission of a crime, including an accused copyright infringer’s vehicle, home, and cell phone.

Putting aside other problems associated with civil forfeiture law, the flaw in DOJ’s reasoning remains that allegations against these websites have no basis in existing criminal copyright law. In order to carry out seizures under civil forfeiture law, authorities must allege in good faith that there is probable cause to believe a crime has been committed—yet the majority of sites shut down under Operation In Our Sites are not involved in direct infringement, and since there is no criminal law that prohibits linking to infringing materials, these seizures are not legal.

In short, magistrate judges are granting ICE authority to shut down web sites in ex parte proceedings, all based on a fundamental misunderstanding of criminal copyright law. If the government is going to engage in widespread Internet censorship based on nonexistent laws, shouldn’t it at least provide website operators with an opportunity to present a defense before taking down the websites?