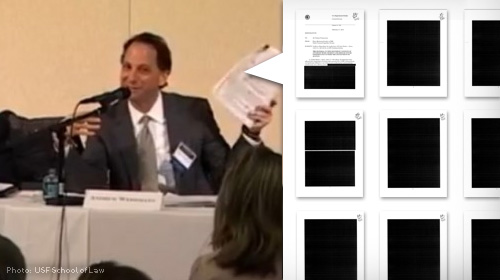 Two key memos outlining the Justice Department’s views about when Americans can be surreptitiously tracked with GPS technology are being kept secret by the department despite a Freedom of Information Act lawsuit filed by the ACLU to force their release. The FBI’s general counsel discussed the existence of the two memos publicly last year, yet the Justice Department is refusing to release them without huge redactions. (You can see the heavily censored versions sent to the ACLU here and here, and our original FOIA request here.)

The Justice Department’s unfortunate decision leaves Americans with no clear understanding of when we will be subjected to tracking—possibly for months at a time—or whether the government will first get a warrant. This is yet another example of secret surveillance policies—like the Justice Department’s secret opinions about the Patriot Act’s Section 215—that simply should not exist in a democratic society. Privacy law needs to keep up with technology, but how can that happen if the government won’t even tell us what its policies are?

The power of law enforcement’s discretion

The Supreme Court has weighed in on location tracking, but the government still has wide latitude to exploit new technologies and legal uncertainty. In February 2012, the Supreme Court issued a landmark decision in U.S. v. Jones, holding that the Fourth Amendment restricts the circumstances in which the government may attach a GPS device to a car and secretly track its movements. Although the Court’s decision in Jones makes clear that the government’s attachment and use of a GPS tracker on a car constitutes a search under the Fourth Amendment, it does not say whether that search requires a warrant from a judge—a crucial protection because it forces agents to justify their actions to a neutral outsider. Furthermore, the court’s opinion does not address other methods of location tracking, such as cell phone tracking, drones, or license plate readers. 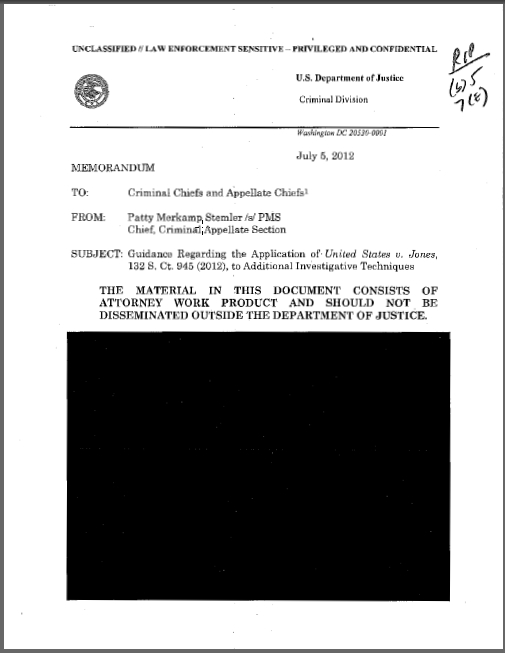 Courts are often slow to extend constitutional protections to new technologies. The telephone was invented in the 1870s, but not until 1967 did the Supreme Court hold that the government needs a warrant to wiretap a telephone conversation.

While we wait for courts to weigh in, how much privacy do Americans have in their movements? Exactly as much as law enforcement agents believe they must give us.

That is why the two memos the ACLU seeks are so important. According to FBI General Counsel Andrew Weissmann, the government has prepared two memos that outline the Justice Department’s conclusions regarding its obligations under Jones, and how they apply to a variety of location tracking methods and technologies. (Although we thought the memos had been authored by the FBI, the government’s has now clarified that they originate with the Justice Department.)

Weissmann’s remarks (video here) raise the possibility that the government believes that the type of vehicle a person is in could impact his or her privacy rights. They also raise the question of whether the government is attaching GPS devices to people’s cars at the international border under more permissive rules.

[The] second memoranda [sic] is going to be about guidance about what this means for other types of techniques, beyond GPS, because there’s no reason to think that this is going to just end with GPS and some of that is going to be very much a judgment call.

While Weissmann did not elaborate on which investigative techniques he had in mind, the obvious one is tracking the location of cell phones. As a recent set of ACLU public records requests demonstrated, cell phone tracking is commonly used by federal, state, and local law enforcement agencies throughout the nation. According to numbers released to Congress last year, the big wireless carriers collectively receive 1.5 million requests from law enforcement each year, many of which are for location tracking.

What about our Fourth Amendment rights?

Americans have a strong interest in disclosure of the Justice Department memos. The Fourth Amendment protects Americans’ reasonable expectations of privacy by limiting the circumstances in which law enforcement agents may conduct searches—but today only the executive branch knows what it believes those limits to be. There are at least two problems with this.

First, given the extreme nature of the government’s arguments in Jones—that the Fourth Amendment places no restrictions whatsoever on its ability to track Americans’ movements in public for days, weeks, or months at a time—there is good reason to fear that the government’s interpretation of its own police powers stretches the court’s opinion to its breaking point. For example, five Justices expressed the view that long-term location tracking violates Americans’ reasonable expectation of privacy; if the government is persisting in the warrantless GPS tracking of cell phones, then that raises serious questions about whether it is complying with its obligations under the Fourth Amendment. The public has the right to know this as an oversight matter.
Second, the lack of information frustrates the democratic policymaking process around these new technologies. For example, those who object to the Justice Department’s self-imposed limitations should have the opportunity to lobby Congress for stricter limits. At the same time, those who feel the government’s police powers are paramount might wish to argue publicly that the government is unnecessarily hamstringing itself by taking too broad a view of the protections afforded by Jones. The public and its representatives in Congress have an important policymaking role to play when it comes to surveillance, but keeping the government’s policies secret prevents it from playing that role.

The ACLU is continuing to fight for release of the memos, and we will ask the court to order the Justice Department to release them because they are being improperly withheld. The purpose of FOIA is to make sure the government doesn’t operate under secret law—and right now that’s exactly what these memos are.