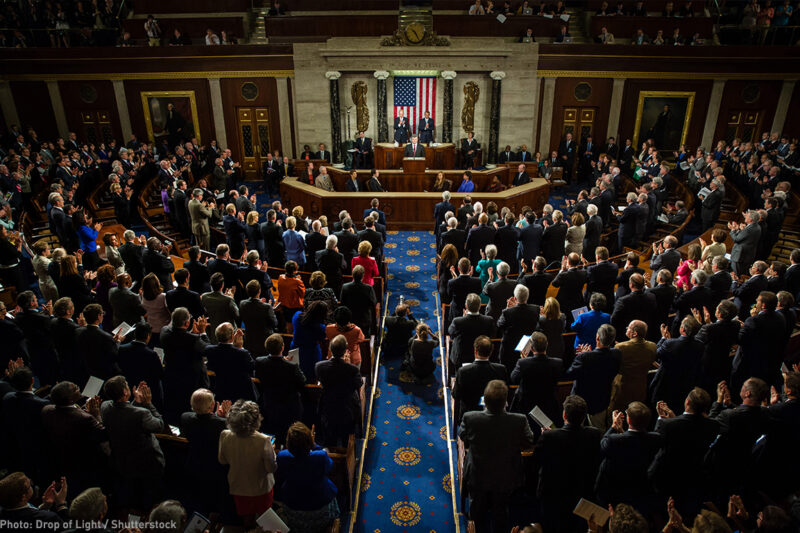 House leadership today once again caved to irresponsible fearmongering from the intelligence agencies and succeeded in jamming through a hastily drafted surveillance bill.

In a 256-164 vote, the House passed a bill that would extend, or in many respects possibly expand, a controversial spying authority known as Section 702 of the Foreign Intelligence Surveillance Act. This law is used to spy on the emails, text messages, and other electronic communications of Americans and foreigners without a warrant. The bill now goes to the Senate.

The members who supported the dangerous FISA Amendments Reauthorization Act, including House Speaker Paul Ryan (R-Wisc.) and Democratic Minority Leader Nancy Pelosi (D-Calif.), acted in direct opposition to the interests of their constituents to be free from warrantless government spying. Senate leaders should refuse to buckle under pressure from the Trump administration and intelligence committees, and instead vote to reform these government powers, which could too easily be deployed to spy on immigrant communities, minorities, government critics — and everyone else.

Since the Snowden revelations in 2013, the public learned that Section 702 has been used unlawfully and in ways that was never intended. The government has more than 100,000 “targets” for surveillance, and collects hundreds of millions of communications per year. These targets, which can be people or groups, aren’t individually approved by a court. By design, this dragnet includes intimate and private communications with individuals in the U.S., and very likely disproportionately impacts immigrants, journalists, and global businesses that more frequently engage in overseas communications.

The government would have you believe that all of the individuals they target are known terrorists. But we know this is not true. Court records confirm that not all 702 targets are terrorism suspects. Indeed, the law allows the government to target individuals who it believes are reasonably likely to communicate about “foreign affairs.” If you are a journalist talking about North Korea, a businessman expressing thoughts about the global economy, or an ordinary person discussing the Trump border wall proposal, your conversation could be considered “foreign intelligence” under the law’s broad definition.

This is only a part of the problem. The current law also places few restrictions on how this trove of information can be used.

The government asserts that it has a right to search through data collected under Section 702 for information about Americans — whom the government is not supposed to target under Section 702 — without a warrant. To justify these “backdoor searches,” it can simply claim that it is seeking “foreign intelligence” or evidence of a crime. The FBI routinely searches through Section 702 information in cases unrelated to national security or where they may not even have the facts necessary to open a criminal investigation.

Instead of taking steps to close this loophole, the House just made the law worse. The bill that advances to the Senate, first introduced by Rep. Devin Nunes (R-Calif.), would allow backdoor searches to continue virtually unchecked, even in cases where the FBI does not have an active investigation or merely asserts a foreign intelligence purpose. In addition, Nunes’ bill risks bringing back — and codifying — illegal surveillance practices that the government has used to collect domestic communications that are merely “about” surveillance targets.

This is the wrong approach. Before passing this dangerous bill, the House voted down, in a 233-183 vote, an amendment sponsored by Rep. Justin Amash (R-Mich.) and Rep. Zoe Lofgren (D-Calif.). That amendment would have required the government to get a warrant when it searches for the information of American citizens and residents and to take steps to end the collection of wholly domestic communications. Such reforms are critical to prevent Section 702 from being used as a tool that can be improperly deployed against activists and other vulnerable communities.

Our country has a checkered past when it comes to surveillance. Broad and unchecked surveillance powers have been used as a tool against activists, government critics, journalists, and minorities. Martin Luther King, Jr., Cesar Chavez, Vietnam war critics, and Muhammad Ali were among those that have been surveilled under the pretext of protecting “national security.”

Given this history, members of Congress and the public should be skeptical of claims that expanding or maintaining warrantless surveillance powers are needed to keep our country safe. And they should be especially wary of providing more power to intelligence agencies in the current environment, where the president has already adopted policies that discriminate and target individuals based on their religion, nationality, and viewpoints.

Members of Congress have often publicly expressed concern at the Trump administration’s overreach and discrimination. If senators vote to give the administration greater spying authority, those words will prove awfully hollow.