My Life in Circles: Why Metadata is Incredibly Intimate 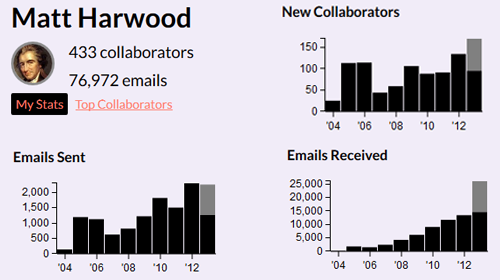 One of the most disingenuous arguments in the aftermath of the NSA spying revelations is that the American people shouldn’t be concerned about the government hoovering up its sensitive information because it’s only metadata–or a fancy way of saying data about the data.

“This is just metadata,” Senate Intelligence Committee Chairwoman Dianne Feinstein assured the American people, referring to the NSA’s bulk collection of Americans call records. “There is no content involved.” President Obama and his national security officials have made similar assurances.

Feel better? You shouldn’t and here’s why.

A tool developed by MIT Media Lab proves how intrusive the collection and analysis of metadata is over time, especially for those who are overly reliant on email as their main method of communication. Dubbed “Immersion,” the tool analyzes the metadata–From, To, Cc and Timestamp fields– from a volunteer’s Gmail account and visualizes it.

In the interest of proving how absolutely invasive and telling a person’s e-mail metadata is, I’ve allowed Immersion to analyze almost 9 years of my Gmail history. The results are incredibly cool–when done voluntarily–and absolutely frightening–when you consider government does this analysis without consent or judicial oversight. While the data visualizations below have been anonymized–which Immersion allows users to do–I’ll briefly describe how incredibly powerful and revealing such data crunching is when laid out in all its transparent glory. What you see here is a full analysis of my personal and professional networks over 8.8 years of using Gmail. 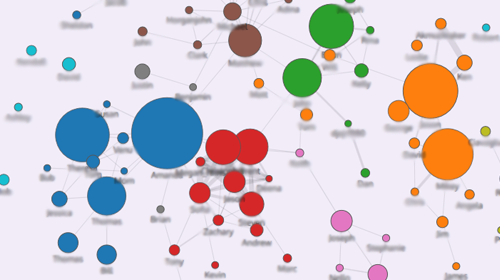 Over the last nine years, I’ve worked at a political magazine; went overseas for graduate study; worked at a security trade magazine; written numerous freelance pieces of journalism on terrorism, whistleblowing, domestic extremism, homeland security, and the civil liberties implications they all raise. I also dated frequently before meeting my wife and have established many friendships, and lost some along the way, over the last 9 years.

When visualized and analyzed over time, my data reveals my family members–who are all tightly grouped and linked together–and those people who I am, or was, closest to in each phase of my private and professional life. All of my various work colleagues are networked together as well as my many circles of friends, tethered together around high school, grad school, different work places, and even where I’ve lived. It’s easy to tell which woman became my wife, when we met, and how our relationship grew stronger over time. By using Immersion’s time scroll, I can go back in time, find my wife, and watch as her speck balloons into the biggest orb in my interconnected sea of circles.

The data visualization also shows potential discord over time, such as friends who have either become acquaintances or even possibly enemies. (If someone were to target individuals to gather dirt on me, my guess is they would start with people who had a history of communication with me and then suddenly trailed off or fell off a cliff, visually speaking. Immersion allows you to see this by simply clicking on a particular contact’s circle, which reveals your “interaction volume.”) And more worrisome for a journalist, it’s easy to determine who my sources were for particular stories. This is why mathematician and former Sun Microsystems engineer Susan Landau told the New Yorker’s Jane Mayer that metadata is “much more intrusive than content.”

The data visualizations the tool spits out are even creepier since we know government metadata collection didn’t stop at Americans’ call records. When the Guardian recently published a 2009 report from the National Security Agency’s inspector general, the public learned that the government collected their online records as well. (The latter program, known as MARINA, was terminated in 2011, although there’s no way to know whether Internet metadata collection continues under another guise.)

When listening to the likes of President Obama and Sen. Feinstein talk about metadata, the impression you get is that government collection and analysis of metadata isn’t an unconscionable intrusion into our most private spaces. A quick analysis of my own Gmail metadata proves how extraordinarily misleading this line of argumentation is.

Metadata, no matter what the detractors say, collected over time is an intimate repository of our lives–whom we love, whom we’re friends with, where we work, where we worship (or don’t), and whom we associate with politically. The right to privacy means our metadata shouldn’t be collected and analyzed without reasonable suspicion that we’ve done something wrong.