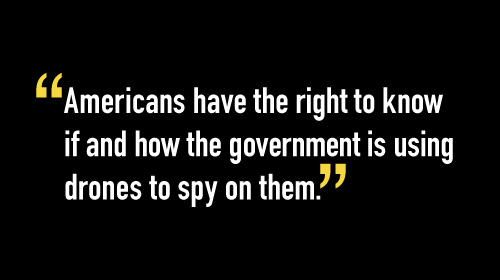 The use of surveillance drones is growing rapidly in the United States, but we know little about how the federal government employs this new technology. Now, new information obtained by the ACLU shows for the first time that the U.S. Marshals Service has experimented with using drones for domestic surveillance.

We learned this through documents we released today, received in response to a Freedom of Information Act request. The documents are available here. (We also released a short log of drone accidents from the Federal Aviation Administration as well as accident reports and other documents from the U.S. Air Force.) This revelation comes a week after a bipartisan bill to protect Americans’ privacy from domestic drones was introduced in the House.

Although the Marshals Service told us it found 30 pages about its drones program in response to our FOIA request, it turned over only two of those pages—and even they were heavily redacted.

Here’s what we know from the two short paragraphs of text we were able to see. Under a header entitled “Unmanned Aerial Vehicle, Man-Portable (UAV) Program,” an agency document overview begins:

This developmental program is designed to provide [redacted] in support of TOG [presumably the agency’s Technical Operations Group] investigations and operations. This surveillance solution can be deployed during [multiple redactions] to support ongoing tactical operations.

These heavily redacted documents reveal almost no information about the nature of the Marshals’ drone program. However, the Marshals Service explained to the Los Angeles Times that they tested two small drones in 2004 and 2005. The experimental program ended after both drones crashed.

It is surprising that what seems like a small-scale experiment remained hidden from the public until our FOIA unearthed it. Even more surprising is that seven years after the program was discontinued, the Marshals still refuse to disclose almost any records about it.

As drone use becomes more and more common, it is crucial that the government’s use of these spying machines be transparent and accountable to the American people. All too often, though, it is unclear which law enforcement agencies are using these tools, and how they are doing so.

We should not have to guess whether our government is using these eyes in the sky to spy on us. As my colleague ACLU staff attorney Catherine Crump told me,

Americans have the right to know if and how the government is using drones to spy on them. Drones are too invasive a tool for it to be unclear when the public will be subjected to them. The government needs to respect Americans’ privacy while using this invasive technology, and the laws on the books need to be brought up to date to ensure that America does not turn into a drone surveillance state.

All over the U.S., states and localities are trying to figure out through the democratic political process exactly what kind of protections we should put in place in light of the growing use of what Time Magazine called “the most powerful surveillance tool ever devised, on- or offline.” These debates are essential to a healthy democracy, and are heartening to see. However, this production from the Marshals Service underscores the need for a federal law to ensure that the government’s use of drones remains open and transparent.

A number of federal lawmakers are already pushing to bring the law up to date. Representatives Ted Poe (R-Texas) and Zoe Lofgren (D-Calif.) recently introduced the first bipartisan legislation to regulate the government’s use of drones. The proposed legislation, which is supported by the ACLU, would enact judicial and Congressional oversight mechanisms, require government agencies to register all drones and get a warrant when using them for surveillance (except in emergency situations), and prohibit the domestic use of armed drones.

We believe this bill—and hopefully a future companion bill in the Senate—will provide a strong foundation for future legislation protecting our privacy rights in the face of proliferating drone surveillance and government secrecy.