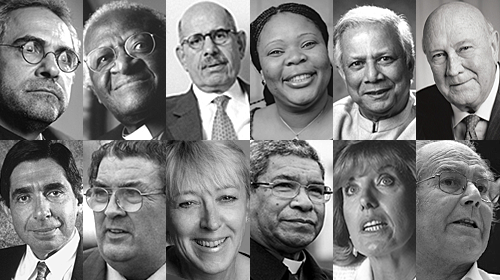 Twelve Nobel Peace Prize laureates sent a powerful letter to President Obama today, calling on him to lead the nation by reckoning with the Bush administration’s torture program, closing Guantánamo, and adhering fully to the United States’ legal obligations under the Geneva Conventions and the U.N. Convention against Torture.

The laureates, led by Archbishop Desmond Tutu and Dr. Jose Ramos-Horta, explained why they have a personal interest in the direction our nation takes:

We have reason to feel strongly about torture. Many of us among the Nobel Peace Prize laureates have seen firsthand the effects of the use of torture in our own countries. Some are torture survivors ourselves. Many have also been involved in the process of recovery, of helping to walk our countries and our regions out of the shadows of their own periods of conflict and abuse.

It is with this experience that we stand firmly with those Americans who are asking the US to bring its use of torture into the light of day, and for the United States to take the necessary steps to emerge from this dark period of its history, never to return.

They emphasized that the long-awaited release of the Senate Intelligence Committee’s summary report on the CIA torture program “brings the country to a crossroads. It remains to be seen whether the United States will turn a blind eye to the effects of its actions on its own people and on the rest of the world, or if it will take the necessary steps to recover the standards on which the country was founded, and to once again adhere to the international conventions it helped to bring into being.”

Perhaps anticipating that — as news reports indicate — the CIA will launch a campaign defending its use of torture and cruel treatment, the laureates said:

Torture is, and always has been, justified in the minds of those who order it. But the damage done by inflicting torture on a fellow human being cannot be so simplified. Nor is the harm done one-sided. Yes, the victims experience extreme physical and mental trauma, in some cases even losing their lives. But those inflicting the torture, as well as those ordering it, are nearly irreparably degraded by the practice…

When a nation’s leaders condone and even order torture, that nation has lost its way.

The letter comes as a dispute continues to rage between the Senate Intelligence Committee and the CIA over redactions to the committee’s torture report, holding up its release. We have warned for months that the CIA should not be able to censor a landmark investigation into its own terrible misconduct, and the first step President Obama should take in response to this letter is to order the CIA to end its self-serving fight.

Archbishop Tutu, a hero in South Africa’s fight against apartheid and one of the world’s leading voices of conscience, said the letter also responds to news that the Obama administration is debating whether to follow a Bush-era misinterpretation of the Convention against Torture, under which the torture treaty’s ban on cruel treatment would not apply when the United States operates abroad. Archbishop Tutu described this to the New York Times as “foul thinking.”

Perhaps the most powerful part of the letter is the laureates’ reminder that when our nation strays from our values and respect for human rights, the whole world feels the negative effects:

In recent decades, by accepting the flagrant use of torture and other violations of international law in the name of combating terrorism, American leaders have eroded the very freedoms and rights that generations of their young gave their lives to defend. They have again set an example that will be followed by others; only now, it is one that will be used to justify the use of torture by regimes around the world, including against American soldiers in foreign lands. In losing their way, they have made us all vulnerable.

That’s why the whole world is watching to see if President Obama helps lead our nation in a decisive return to the values on which it was founded, and the laws by which it must abide. You can join the laureates’ call by signing a petition to President Obama here.