Now's the Time to Hold President Bush Accountable for Torture

President Bush wrote, in Decision Points, that he “approved the use of the [enhanced] interrogation techniques,” including waterboarding, on Abu Zubaydah, and that he responded to a request to waterboard Khalid Sheik Mohammed by stating: “Damn right.”

Does it get any clearer than that? Our former president ordered torture.

“torture” means an act committed by a person acting under the color of law specifically intended to inflict severe physical or mental pain or suffering (other than pain or suffering incidental to lawful sanctions) upon another person within his custody or physical control;

Sounds to us like President Bush broke the law. So last Thursday, the ACLU sent a letter to Attorney General Eric Holder urging him to ask Assistant U.S. Attorney John Durham to investigate whether Bush violated the Anti-Torture Statute. From our letter:

The ACLU acknowledges the significance of this request, but it bears emphasis that the former President’s acknowledgement that he authorized torture is absolutely without parallel in American history. The admission cannot be ignored. In our system, no one is above the law or beyond its reach, not even a former president. That founding principle of our democracy would mean little if it were ignored with respect to those in whom the public most invests its trust.

If this country is committed to the rule of law, our leaders cannot ignore this very clear, plain evidence that our former president authorized torture. 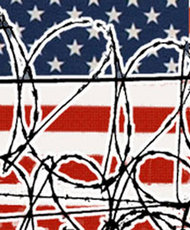