From the NSA to License Plate Readers: Are We to Have a “Collect it All” Society?

If the NSA needs a slogan, it should probably be “collect it all.” As phrased by an anonymous intel official recently quoted by the Washington Post, that has apparently been the approach of agency leadership in recent years. But the fight over whether that’s an appropriate strategy for keeping order in a democratic society is one that stretches far beyond the NSA programs now being debated.

For example, look at automatic license plate recognition systems, which are now sprouting up around the country. As we detailed in our recent report on the technology, many police departments are collecting and storing not only information about vehicles that are wanted by the police, but also location information about everybody who drives a car. Some police have defended this practice by arguing, essentially, that “you never know when or what we might need to solve a crime.”

In a 2007 ACLU privacy report, in a discussion of what was then known about NSA spying, I speculated,

It is also possible that the government is compiling some data not for the purposes of any kind of immediate scrutiny, but in order to build up a sea of information to have on hand just in case analysts want to “swim through it” on a particular investigation. That would let them skip the trouble of having to go to a judge and request approval for specific data—in essence, a shortcut around the Constitution.

It is now clear that that is exactly what the NSA is doing with phone records, and who knows what other kinds of records—and what some local police departments are doing with license plate data. 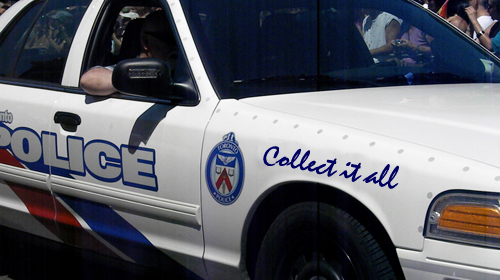 The argument that we need to let government agencies build these oceans to swim through is one that we will be confronting in area after area, technology after technology. Not just calling records and license plate records, but also (as Rep. Blake Farenthold emphasized while grilling NSA officials at a hearing) financial transactions, hotel records, Google searches, and any other information shared with online companies. It could also be applied to video—images taken by drones, by street cameras, by cameras worn by police officers, or by Google Glass (which is uploaded to the company). Why not get copies of all that video, store it in Utah, and swim through that data too (aided, of course, by face recognition technology to instantly pull up every video in which you’ve ever appeared).

We now have technologies that enable the creation of very detailed data on our activities. Those technologies are only going to get more powerful and more pervasive. We need to make a choice as a society about the extent to which we want to allow the government to store up that data so that it has the power to hit “rewind” on everybody’s lives. In our view, that’s just too much power.