NYPD Shutters Muslim Mapping Unit – But What About Other Tactics? 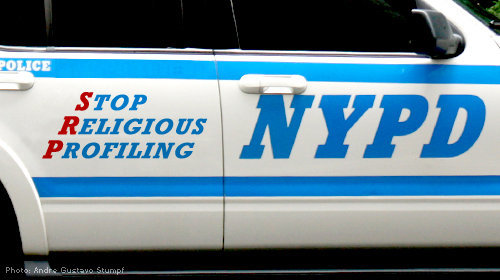 The New York Police Department is disbanding the unit that mapped New York’s Muslim communities, their places of worship, and businesses they frequent – based on nothing but their religious beliefs and associations. To this we say: Good Riddance.

But the end of the Zone Assessment Unit – better known by its former, more apt name, the Demographics Unit – doesn’t necessarily mean an end to the NYPD’s unconstitutional surveillance of New York’s Muslims.

The NYPD’s discriminatory spying program has many components, of which the Demographics Unit was just one. (The ACLU, along with the NYCLU and CLEAR Project at CUNY Law School sued the NYPD over the program – read about our case here.) Before we celebrate the end of bias-based policing, we need to ensure that the other abusive tactics employed by the NYPD meet the same fate as the unit. For example:

The Demographics Unit has sown fear and mistrust among hundreds of thousands of innocent New Yorkers – creating “psychological warfare in our community,” Linda Sarsour of the Arab American Association of New York told the New York Times. Shutting it down is a welcome step, but it’s only the first one. New York’s Muslims — and all its communities — deserve more and better from their police force than bias-based policing.