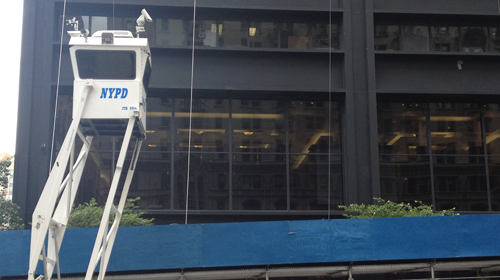 The day after police evicted Occupy Wall Street protestors from Zuccotti Park last fall, I had some trouble deciphering exactly what had happened. Police had corralled journalists into a “press pen” removed from the park itself, and arrested at least ten people for attempting to take photos or video. When I visited Zuccotti during the following days and weeks to see for myself what was happening, I could only enter through a single access point, guarded by police officers who often filmed me as I walked in. Why could police arrest people for taking video footage of them, and then turn the cameras on those same people for engaging in lawful activity in a public space?

The answer, of course, is that they couldn’t—not legally, at least. Under the First Amendment, Americans have the right to observe and record members of the police force in the public discharge of their duties. Conversely, the NYPD’s right to conduct photo and video surveillance on citizens engaging in lawful protest is limited, with very few exceptions, to circumstances in which “it reasonably appears that unlawful conduct is about to occur, is occurring, or has occurred.”

As a report released today by the New York Civil Liberties Union starkly illustrates, though, these rules bear little relation to what is actually happening. Police continue to subject photographers to harassment, injury, and arrest. In July, an activist (and friend of mine) found that videotaping police stop and frisks had landed him on a “Wanted”-style police poster featuring his full name, photograph, and home address. The following week, a photographer attempting to document an arrest was flung violently over a stone bench several times, pinned down by a knee on the back of his neck, and arrested.

Even as they mistreat photographers, police are continuing to subject these same citizens to illegal surveillance. When recordings are made for a purpose other than to record unlawful activity, police are supposed to avoid “close-ups of participants.” Yet peaceful marches are regularly lined with NYPD officers, cameras in hand, zooming in on individual faces. Even more egregiously, there has been at least one case this summer of police filming a protestor receiving medical treatment by EMTs.

From the earliest days of the occupation at Zuccotti Park, a police watchtower carried out round-the-clock surveillance of the protesters below. Almost a full year after the Occupy movement began, the watchtower remains, clearly communicating that “even if you’re not doing anything wrong, we’re watching.”

Under our laws and the Constitution, you have the right to film police without making yourself a target, and to engage in political speech and assembly without police surveillance (see the ACLU’s related resources here). Follow NYCLU’s Facebook and Twitter feeds to learn when they post a new Free Speech Threat Assessment report, and keep an eye out for upcoming reports by the Protest and Assembly Rights Project on the police response to Occupy movements in Boston, Charlotte, Oakland, and San Francisco.