Odds Are, You Are Suspicious 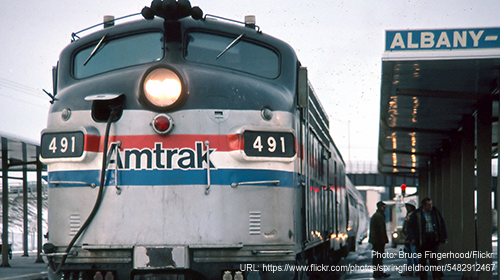 If you don’t know the answers to these questions, you’d better figure them out now. Because unless you get off in stride with other train passengers, live at the elusive intersection between anxiety and tranquility, and close your eyes during phone calls, you’re a suspicious person subject to questioning by Amtrak police.

According to the Guidelines for Amtrak Customer Service Employees in Texas, which the ACLU has received as a result of a FOIA request, ticket agents may come in contact with travelers whose conduct is “indicative of criminal activity.” Amtrak says supposed indicators of such activity should immediately be reported to trained law enforcement personnel. They include:

Not only does Amtrak ask its ticket agents to alert the cops to such dangerous activity as, say, a spontaneous romantic trip with your honey, Amtrak also urges its customers to report suspicious activity to Amtrak police themselves. In its “See Something, Say Something…Hopefully It’s Nothing” campaign, customers are asked to report such activity as taking photos of equipment – including trains – and “loitering, staring, or watching employees and customers.” Sorry, googly eyes.

While Amtrak certainly has an interest in keeping its passengers safe, it is using the same heavy-handed, dragnet approach that we’ve seen in many of the government’s other counter-terrorism and drug trafficking prevention efforts. As we have seen with Suspicious Activity Reports and the TSA’s SPOT program, reporting based on broad categories of “suspicious” behavior is problematic because it almost always results in racial and religious profiling, as well as the targeting of perfectly innocent activity. Most importantly, building mountains of irrelevant data is ultimately an ineffective law enforcement tactic. (See here and here).

The ACLU has received reports from individuals wrongfully searched and arrested on Amtrak trains, which is why we filed this FOIA request to access the underlying policies leading to such police practices. While we’re particularly interested in how Amtrak is collecting, tracking, and sharing our data — including through new technologies — we have yet to receive information relevant to those questions. But we do know that Amtrak police has not reported a single instance of finding and catching a potential terrorist or serious threat as a result of its suspicious activity reports. Instead, it has filled its trophy case with victories like arresting a black woman because passengers felt she was speaking too loudly on the phone, arresting a black man because another passenger falsely stated he threatened her, and even arresting a photographer because he was taking pictures of a train for the annual Amtrak “Picture our Train” competition (update here).

We have reason to believe that Amtrak’s policies also provide grounds for civil asset forfeiture, a process that effectively allows cops to engage in highway robbery, and often results in racial profiling. The documents we received include agreements between Amtrak and the Las Vegas Police Department, Reno Police Department, and Louisiana state police. The agreements not only officially enable a practice of confiscating money and property from passengers without due process, but also mandate “[e]quitable sharing of forfeited assets;” in other words, state agencies get a cut of assets seized by Amtrak police. Reports of asset forfeiture indicate that the police target those they associate with criminal behavior and drug trafficking – black and Latino men.

If Amtrak police want to help keep us safe, they should come up with smarter policies for detecting and addressing criminal activity. Vague and overbroad standards don’t help anyone — passengers are at risk of harassment by police for lawful actions, and Amtrak makes finding the needle near impossible by vastly enlarging the size of the haystack. If you have been a victim of Amtrak police profiling or asset forfeiture, contact us. Hopefully, it’s nothing.