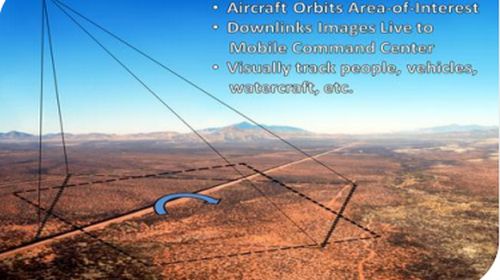 I wrote recently about ARGUS, the high-flying drone technology capable of capturing super-high-definition video of a 15-square mile area and automatically tracking all moving vehicles and people within that area. I pointed out that this makes possible our nightmare scenario for drones: wide-area mass surveillance and location tracking of entire cities and towns.

Now it appears that the city of Dayton Ohio is considering actually deploying a system that is in many respects similar to ARGUS—and although it shares many of the features that are causing so much concern over drones around the country, it is not being held back by the FAA and its well-founded safety concerns around drones.

The reason? The surveillance at issue is based on a manned aircraft rather than unmanned drones.

For the same reason, the program has not attracted any of the national attention that is currently swirling around drones. But according to a Dayton Police Department slide presentation obtained by Ohio activists and shared with the ACLU, the department is pursuing a program called “Trusted Situational Awareness” (such a mouthful of euphemisms for surveillance that it almost sounds like a parody). According to the slideshow, entitled “2013 Aerial Surveillance Project,” a test of the system was conducted for 8 days in June 2012 during daylight hours over Sinclair Community College. (I wonder if the students, faculty and visitors to that campus were made aware they were subjects of this surveillance experiment?)

The program is run by a company called “Persistent Surveillance Systems,” which also makes ground-based wide-area surveillance systems, as touted in this online brochure. According to the slideshow, the program is important because it “Can be utilized to prevent and minimize acts of terrorism, crime and murder.” From the slideshow: 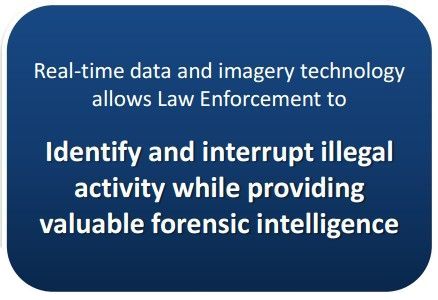 “Forensic intelligence” usually means something like, “keeping records of everything everybody is doing so we can go back and carry out retroactive surveillance whenever we need it.”

The slideshow describes how the police “selected 18 incidents for aerial surveillance,” including a burglary in progress and a robbery spree at three commercial locations. “Analysts were able to track the primary suspect to all of these locations as well as to a Clark gas station prior to the robberies,” the police boast. Slides show aerial tracking of moving suspects: 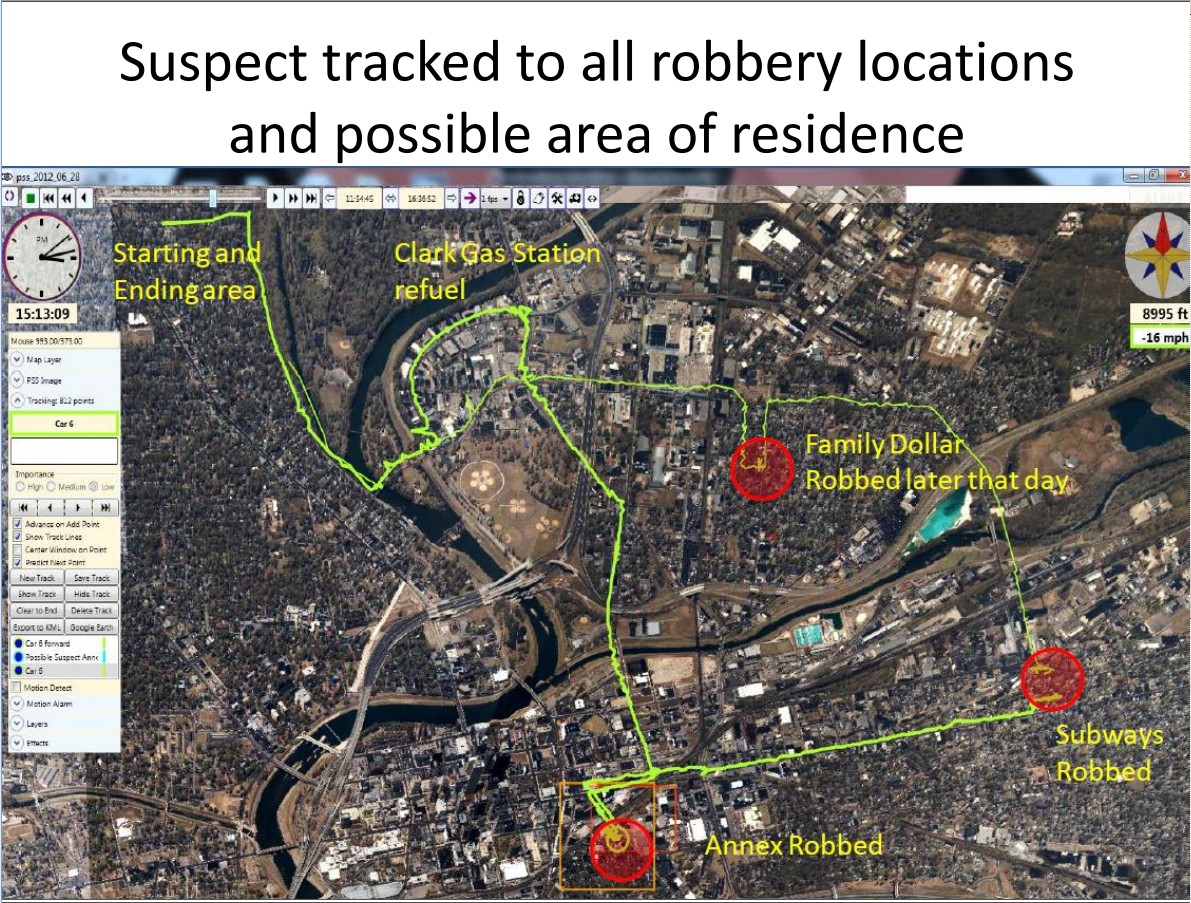 It’s important to note that this is all described as a “test operation,” and it’s unclear whether these were merely simulated crimes set up to test the analytical capability of the system. Whether the system would actually be so effective in real-world conditions is always a question with such technologies, but in any case it certainly shows what the company and police department are aiming for.

Obviously it’s a good thing to stop robbers. But in America we do not allow the government to look over everybody’s shoulders (literally or figuratively) just in case they engage in wrongdoing. We require the police to have individualized suspicion of wrongdoing before they invade our privacy in that way. There is no question that there are some crimes the police will solve if we allow our country to turn into a total surveillance state, but that is a bad tradeoff. The police here want to “identify” illegal activity, which is fine, but not if that’s accomplished by watching all activity.

A group of citizen activists assisted by the ACLU of Ohio have been pushing back against this program in Dayton. The police department gave them a proposed policy to cover the program, and after meeting with the citizens and receiving their feedback, provided an updated policy with “a few small changes, but which doesn’t address the substantive concerns shared with the police department,” as my colleague Melissa Bilancini of the ACLU of Ohio put it. The policy has no warrant requirement, and it lacks clear retention and sharing policies as well as any provisions for independent oversight. The program is on the agenda for a special meeting before Dayton’s City Commission next Tuesday April 9.

Although this issue has flown beneath the drone radar because it involves manned aircraft, the issues at stake are much the same. (Maybe we should start calling the Dayton aircraft “manned drones,” oxymoron or not, if that will help people to pay attention.)

Although manned aircraft have never attracted the policy attention that drones have (for the reasons I outlined here), ultimately the same kinds of protections that are so vital in the face of drone technology should also be extended to manned aircraft. There’s no rational reason why adding a human being to a surveillance craft should change the privacy protections that we create against aerial surveillance.