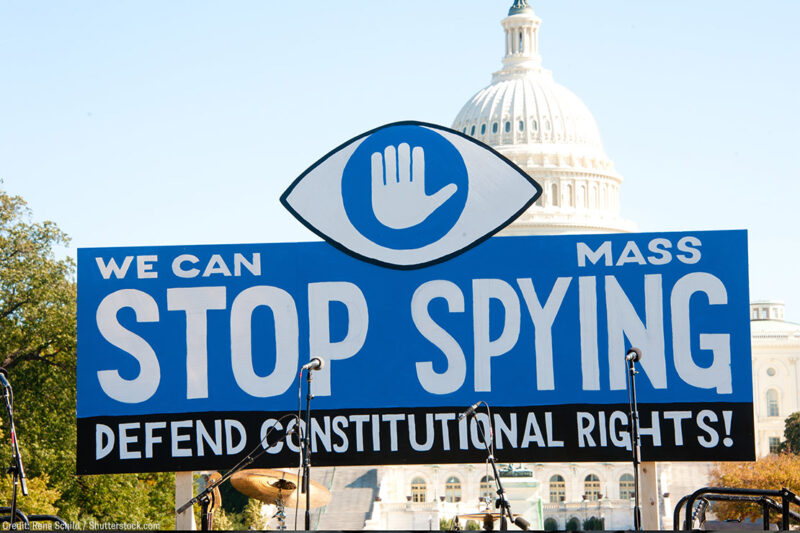 It's not too late for Congress to right the ship on warrantless surveillance — common-sense, privacy-protecting reforms can ensure our safety while also holding our government accountable.

This piece originally appeared in The Hill.

Important issues sometimes divide our nation, but one area where most of us share common ground surrounds is the belief that warrantless secret spying on Americans is unjust.

Soon, the Senate is scheduled to vote on the USA FREEDOM Reauthorization Act of 2020, a bill that would extend provisions of the Patriot Act that expired in March. These provisions are currently not consistent with Americans’ fundamental rights. However, if Congress chooses to reauthorize them, at a minimum, they should be accompanied by meaningful reforms to address the torrent of surveillance abuses that have come to light over the past year. The legislation in its current form fails to accomplish this basic task, and must be amended.

In 2015, Congress passed the USA Freedom Act in a bipartisan effort to address revelations that the National Security Agency had abused provisions of the Patriot Act to obtain the personal information of virtually every American. The stated goal of the bill was to end bulk and large-scale, indiscriminate collection under the Patriot Act, require transparency to prevent future surveillance abuses, and reform the Foreign Intelligence Surveillance Court, which authorizes surveillance of agents of a foreign power in the United States.

Critical protections that were in the original version of the USA Freedom Act – sponsored by over 150 members of Congress – were omitted in the final version of the bill and it has become clear since the bill’s enactment that the USA Freedom Act did not succeed in limiting unwarranted surveillance under the Patriot Act and other intelligence laws.

For example, Section 215 of the Patriot Act continues to be used to collect vast amounts of Americans’ sensitive information under a standard far more permissive than a warrant – with the government refusing to disclose the types of records it believes it can collect under the authority. In addition, last year, a report from the Justice Department’s Inspector General revealed unlawful surveillance of Trump campaign adviser, Carter Page.

Subsequent reports by the Inspector General have shown that the errors in the Page case were not simply one-offs, but rather indicative of systemic deficiencies. For example, a recent audit by the Inspector General of 25 intelligence surveillance applications found “apparent errors or inadequately supported facts” in every single one. It is now abundantly clear that we must dramatically reform both the Foreign Intelligence Surveillance Court and our intelligence laws to safeguard Americans’ rights.

Fortunately, it’s not too late for Congress to right the ship.  Anticipated proposed amendments proposed to the legislation currently under consideration offer a common-sense, privacy-protecting solution.

Adversarial process is a cornerstone of our legal system. Americans expect that when the government makes a claim in a court of law that they aren’t the only voice heard in the courtroom. Unfortunately, that is precisely what happens in our intelligence courts. An amendment anticipated by Senators Leahy and Lee would help to tackle this problem head-on by encouraging the Foreign Intelligence Surveillance Court to appoint a “friend-of-the-court” to provide privacy and civil liberties expertise in cases raising pronounced constitutional concerns.

In addition to this, an amendment anticipated by Sens. Ron Wyden (D-Ore.) and Steve Daines (R-Mont.) would take steps to prevent the Patriot Act from being used to further trample Fourth Amendment rights by limiting collection of internet and search history. Section 215 of the Patriot Act was never intended to give the government carte blanche to engage in the type of collection that typically requires a probable cause warrant under the Fourth Amendment. Under the proposed amendment, the FBI would still be able to get internet search and browsing information in foreign intelligence cases – they would just need to show probable cause like they do in the criminal context.

Finally, Sen. Rand Paul’s (R-Ky.) has said that he also intends to introduce an amendment that will provide further protections for individuals in the US who are ensnared in the FISA process – something that is sorely needed.

There’s much more that needs to be done to fix our nation’s broken surveillance system beyond what’s accomplished in these amendments. Among other things, protections are needed to ensure that First Amendment activity is not a basis for surveillance, that the government purges data that is not foreign intelligence, and that intelligence agencies comply with their constitutional obligation to fully notify individuals when information obtained as a result of intelligence surveillance is used against them.

We all want to keep Americans safe. And we can ensure that safety while also making our government accountable to its citizens’ representatives. Undertaking these reforms will help give the American people the transparency and due process protections they are guaranteed under the Constitution.