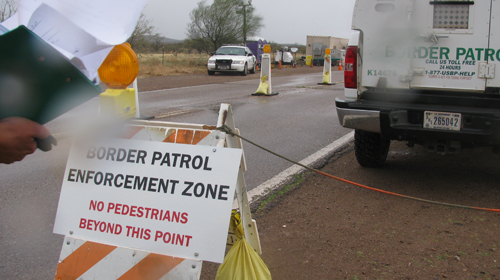 The ACLU of Arizona today sent a letter to the U.S. Border Patrol demanding that the agency immediately stop interfering with the First Amendment rights of the residents of Arivaca, Arizona, to protest and to photograph government activities that are in plain view on a public street.

The dispute is part of a larger developing story in Arivaca that is actually a pretty incredible tale of citizens rising up against governmental abuse and repression in their own community. I recently spoke with James Lyall, a staff attorney for the ACLU of Arizona, and he described the situation to me:

Arivaca is a community of about 700 people, located 50 miles southwest of Tucson. It’s a small town, in a beautiful part of the Sonoran desert. But when you go there sometimes it feels like you’ve gone to another country or somewhere where they’ve declared martial law, just because of the overwhelming Border Patrol presence in the community. There are an unbelievable number of armed federal agents—it seems like every other car or person you see out there is Border Patrol— as well as lots of surveillance towers, drones, and helicopters. Our office regularly takes calls from residents who’ve been pulled over for no reason, detained and interrogated at a checkpoint, or had Border Patrol agents cutting fences and coming onto their property. Residents describe feeling like they’re living in a police state or with an occupying army. Agents will tell people, “You have no rights here,” and “You’re suspect just because you live here.”

People are understandably angry at this extreme militarization of their community. So a number of Arivaca residents have come to together to form an organization called People Helping People. It’s a true grassroots effort, led by community members, and last year they launched a campaign to demand the removal of the Arivaca Road checkpoint. That’s just one of three Border Patrol checkpoints that surround the town and that have had a profoundly damaging impact on the community. Residents have experienced years of routine harassment and civil rights abuse at the Arivaca Road checkpoint, which is about 25 miles north of the border. They also say they’ve seen a decline in property values and tourism, and harm to local businesses. One local business owner recently went under, she believes, because of the decline in tourism resulting from the checkpoint, which has now been there for over seven years—even though it was supposed to have been a “temporary checkpoint.” They also object that the checkpoint is part of a broader enforcement strategy designed to drive migrants into the harshest parts of the desert, resulting in countless deaths.

In January, the ACLU of Arizona filed an administrative complaint with DHS regarding abuses at six different southern Arizona checkpoints, including the checkpoint on Arivaca Road. Reading the complaint conveys a some of the texture of what it is like for the citizens living in the area—though as the complaint notes, Border Patrol abuses are not limited to Arivaca or to the Southwest border region—and how Border Patrol agents are going far beyond the limits of their authority at checkpoints, which the Arizona Republic estimates now total 170 nationwide.

These interior checkpoints are in part the result of decades-old regulations giving Border Patrol authority to operate within a “reasonable distance” of the border. That distance was defined in federal regulations in the 1950’s —with no public comment or debate, and at a time when the Border Patrol comprised fewer than 1,100 agents—as 100 miles from any external boundary of the U.S. That area that now encompasses roughly two-thirds of the U.S. population, nine of the ten largest cities, and the entirety of ten states. The law also gives Border Patrol authority to enter private lands within 25 miles of the border.

In practice, however, Border Patrol often goes even further into the interior. In 2008, Senator Patrick Leahy (D-Vt.) was stopped at a checkpoint 125 miles from the Canadian border, one of many examples of agents disregarding the geographic and legal limits on their authority. Many are also surprised to learn that Border Patrol operates checkpoints in northern states too, and that even more could be on the way: a recent ACLU Freedom of Information Act (FOIA) request revealed design plans for permanent Border Patrol checkpoints on southbound New England highways.

Lyall describes how the people of Arivaca have organized against the checkpoint:

These are people who have to go through this checkpoint on a daily basis—to go to work, to take kids to school, to get groceries. And every day they have to answer to an armed federal agent. And they don’t know if they’re going to be waved through, or if agents are going to say, “I want to search your trunk.” They have the right to refuse a search—but they could find themselves detained while drug dogs tear apart their car. And that has happened—repeatedly. So they never know when they pull up to the checkpoint on a daily basis what they’re going to get.

The first part of their campaign was to petition for the removal of the checkpoint: The petition was signed by over 200 people and 10 businesses—so about a third of the town, including most of the business owners in the town. Their congressman, Raúl Grijalva, wrote a letter in support of their petition. And Border Patrol wrote back saying we take your concerns seriously but buzz off—that’s essentially what they said. Nothing about investigating the civil rights violations. Border Patrol has even refused to release stop data that would allow the community to assess whether this checkpoint is even needed.

So that was the first step. Their next step, Lyall says, was to initiate a checkpoint monitoring campaign, in light of all the abuses committed at that checkpoint:

They started monitoring the checkpoint on February 26th. About five or six checkpoint monitors in yellow vests, with video cameras and notebooks—as well as about two dozen supporters—went out to protest and monitor the checkpoint. Local media and the LA Times covered the event.

So they arrived at the checkpoint on foot, and set up near the secondary inspection area, where Border Patrol agents sometimes ask people to pull over to have their car searched. And they began to picket and to video record and document agents’ interactions with motorists. Border Patrol agents approached them and told them they couldn’t be there, giving a variety of vague and inconsistent reasons: that Border Patrol had a permit, that they had exclusive authority within this area. The Sheriff came and just asked them to go across the street, which they did. But shortly after the Sheriff left, Border Patrol said “you have to move 100 feet back that way or we’re going to arrest you.” So under threat of arrest they were forced to move quite a ways away from the checkpoint, behind a hastily constructed barricade, where they couldn’t really see or record what was going on.

A few days later, they came back, and Border Patrol had set up “No Pedestrian” signs and more barriers and rope blocking the public right of way. Border Patrol is now claiming that this public roadway is their exclusive zone of authority and there are no pedestrians allowed. They also parked their vehicles right behind the barrier to further obstruct view of the photographers and protesters. On one occasion, they left a Border Patrol vehicle running for several hours, blowing exhaust in the faces of the monitors to try to make them go away. They also allowed Border Patrol supporters—but not the monitors—to set up inside the new “enforcement zone.” That’s a pretty good example of something called “viewpoint discrimination,” and it’s unconstitutional.

Border Patrol has no authority to come into this community and say “this is ours now and you have to stand 150 feet away behind our cars that are parked there so you can’t see what we’re doing to your neighbors.” This is no different than any other police checkpoint, where courts have been very clear that law enforcement can’t unreasonably restrict First Amendment rights of protesters and photographers, much less retaliate against people for exercising those rights. And courts have repeatedly said that a public roadside like this is “the archetype of a traditional public forum,” where the government’s ability to restrict speech for any reason is tightly curtailed.

So now, on top of all the abuses this community has had to face from Border Patrol, agents are violating residents’ fundamental First Amendment free speech rights as well—the right to protest a checkpoint that has profoundly negative impacts on their daily lives, and the right to video record an agency that is known for routine rights abuses of residents. I don’t think there could be any clearer demonstration of the Border Patrol’s lack of public accountability and transparency: instead of addressing the rights violations and the community’s concerns, they’re literally barring the residents of Arivaca from seeing what these armed federal agents are doing to their friends, family, and neighbors—in their own community.

So the work the people in Arivaca are doing is an important precedent and it’s important for the ACLU to support their efforts—especially now that the Border Patrol is piling on First Amendment abuses on top of the other civil rights and human rights violations that we and others have been documenting for years.

The residents of Arivaca are proving that the American spirit, alive since the Revolution, is not dead—that Americans still have it in them to rise up against occupying soldiers and abusive government authorities. They are fighting for their own rights —but they’re also fighting for all of our rights.