Profiling Muslims at the Airport 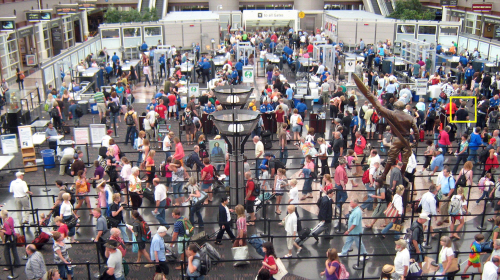 I finally had a chance to read this extended debate between the security-ologist Bruce Schneier and critic-of-religion Sam Harris (yes that Sam Harris) over whether we should profile Muslims in airport security.

First of all, Sam Harris performs a useful function by articulating a more sophisticated version of what is the intuitive position for many Americans, which runs something like: “we know who the danger is, it ain’t old ranchers from Texas or pretty blondes from San Diego—it’s Muslims, so let’s focus airport security on them.” (I hear this regularly myself when discussing airline security in public.) By fearlessly arguing for such profiling—which many people might quietly suspect makes sense—Harris sets it forth explicitly so that it can be explicitly debunked. And Schneier not only debunks it, he demolishes it.

Much of the debate consists of Schneier complexifying the seemingly simple notion of “profiling Muslims”—which as Harris acknowledges at the outset must really be “Muslims or anyone who could conceivably be Muslim.” Things only get more complicated from there.

This debate made me recall the touching descriptions by Malcolm X, reprinted in his autobiography, in which he marvels at the racial and ethnic diversity of the Muslims he met on his pilgrimage to Mecca (and the absence of the oppressive racism that he experienced at home):

There were tens of thousands of pilgrims, from all over the world. They were of all colors, from blue-eyed blonds to black-skinned Africans.. . . During the past eleven days here in the Muslim world, I have eaten from the same plate, drunk from the same glass, and slept in the same bed (or on the same rug)—while praying to the same God—with fellow Muslims, whose eyes were the bluest of blue, whose hair was the blondest of blond, and whose skin was the whitest of white.

As Schneier points out, to actually implement a Muslim-profiling system, the gigantic bureaucratic organization that is the TSA will need to develop a precise operational definition for those “who could conceivably be Muslim.”

And it needs to be a definition that can be taught to the TSA screeners, written down in the Standard Operating Procedures (SOP) manual found at every TSA checkpoint. I believe that once you start trying to specify your profile exactly, it will either encompass so many people as to be useless, or leave out so many people as to be dangerous.

Schneier notes, “since there’s no such thing as ‘looking Muslim’—it’s a belief system, not an ethnic group—they’re going to sort on something like ‘looking Arab,’ whatever that ends up meaning.”

Yet regardless of such details, the complexities that a profiling system would bring to screening decisions themselves would be considerable, Schneier points out.

In practice, [ethnic profiling] would mean that everyone would go through primary airport screening: x-ray machine for hand luggage, and the magnetometer or full-body scanner for their bodies. But when primary screening results in an anomaly—this is generally because the magnetometer beeps, the full-body scanner shows something, or there’s something suspicious in an x-ray image—in some cases people who don’t meet the profile would be allowed through security without that anomaly being further checked. . . .

If the full-body scanner image clearly showed a gun-shaped object strapped to the leg of a passenger, presumably that would be checked in every case. But what about something that looks mostly like a gun? Or sort of like a gun? Or just a large blob of something? At some point, your system is going to allow a non-profiled person through but further check the profiled person. . . .

Remember, this all has to be in the screener’s procedure manual. It’s not something that can be invented on the fly. The result will be an extraordinarily complex system, as we consider all of the possible cases. And the more complicated the system, the easier it is to make mistakes.

We could debate the relative risks of Asian-looking Muslim terrorists versus Semitic-looking Muslim terrorists, or the ability of the people who have taken over from bin Ladin or KSH to recruit Western-looking Muslims. . . . But all of this goes away if you don’t profile. It doesn’t matter how effective al Qaeda leaders are at recruiting Muslims who don’t fit the profile. It doesn’t matter what the intelligence says, or who’s right and who’s wrong. By employing a simpler security system, the whole potential avenue of attack—not meeting the profile—disappears.

Being constantly subject to high scrutiny at an airport while others sail through because of how they look would also, no doubt, get old very quickly for those deemed to fit the profile. And as Schneier points out, this itself is a security risk.

This increases anti-American sentiment among Muslims. This reduces our security, less because it creates terrorists—although I’m sure it is one of the things that pushes a marginal terrorist over the line—and more that a higher anti-American sentiment in the Muslim community is a more fertile ground for terrorist groups to recruit and operate. Making sure the vast majority of Muslims who are not terrorists are part of the “us” fighting terror, just as the vast majority of honest citizens work together in fighting crime, is a security benefit.

Throughout the debate, Schneier sticks doggedly to the question of security effectiveness—“I don’t care about the political correctness of this,” he states at one point. He does briefly comment, however, on the other costs such a system would impose.

Security isn’t the only thing we’re trying to optimize; there are other values at stake here. There’s a reason profiling is often against the law, and that’s because it is contrary to our country’s values. Sometimes we might have to set aside those values, but not for this.

In the end, Schneier persuasively argues, the limited benefits of profiling—the fact that some people will be able to skip secondary screening some of the time—do not come close to counterbalancing the costs in increased security risks, in bureaucratic procedure and training, in alienation of Muslim Americans, and in betrayal of our values.