Protesting NATO: What to Know About the Secret Service and H.R. 347 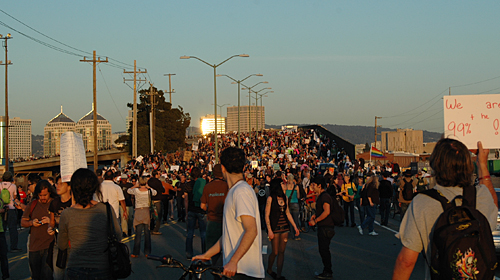 The forthcoming summit of the North Atlantic Treaty Organization, set for May 20 and 21 in Chicago, could be the first public test of H.R. 347, the recently passed law that expanded the ability of the Secret Service to suppress protests in or around certain restricted zones near individuals under its protection. We’ve written about H.R. 347 here and here.

NATO summits are interesting affairs. Unlike the periodic meetings of member nations, the summits are more stately and elaborate events, meant to introduce major policy changes or new members to the strategic alliance (among other things). This means lots of Very Important Persons, and lots of Very Controversial Issues. Both of these things mean lots of expected First Amendment activity.

As far as H.R. 347 goes, the NATO summit has been declared a “National Special Security Event” by the Department of Homeland Security. This puts the Secret Service in charge of the overall security plan. My understanding is that the FBI chips in with counterterrorism and counterintelligence assistance, and the Federal Emergency Management Agency (another DHS agency) is in charge of emergency preparation. It also means massive security preparations and infrastructure—and lots of opportunities for the suppression of lawful protest.

The entire area around Chicago’s McCormick Place—the main site for the summit—will be off-limits to unauthorized personnel, and I believe will qualify as a restricted zone under the federal law that was amended by H.R. 347. Additionally, the Secret Service plans to close parts of Lake Shore Drive and I-55 near the summit as well as other locations in the Loop.

For protesters, this means a couple of things. First, be aware of the types of conduct covered by the law amended by H.R. 347 (all of this stuff was actually illegal before the recent revamp, which is partially why the bill sailed under the radar). That is, you cannot:

Second, note this is where the lowered intent standard in the law, which we explained here, could come into play. Previously, per the one case discussing the scope of the law amended by H.R. 347, there was a question about whether you had to affirmatively know your actions were unlawful under federal law before you could be convicted under the relevant federal statute. Under H.R. 347’s amendments to that statute, I think it’s safe to say that requirement is gone. All you need to know are the “facts underlying” the offense, meaning that you merely need to be aware you’re engaged in the conduct described above in one of these zones, but not that it’s illegal.

In practice, this could mean that protesters who inadvertently find themselves in one of these areas could be arrested and charged under H.R. 347. That said, the law also requires that the area be “posted, cordoned off, or otherwise restricted,” meaning that it would have to be obvious based on signage, a cordon of police officers surrounding the area or some other means that the area is a federally restricted area. If not, it would arguably be difficult to form the required intent to commit the crime. That will not necessarily, however, stop the authorities from arresting you.

What will be particularly interesting (read: alarming) is if the Secret Service starts to use the law to get at protests that are physically removed from the event. For instance, if a lawful protest that is within earshot of the summit gets rowdy enough that it “disrupts” the “orderly conduct of Government business or official functions,” does that trigger the statute? We just don’t know. The Secret Service certainly has the ability and obligation to secure the individuals it protects, but it also must permit lawful protest to be seen and heard. It cannot use H.R. 347 to “sanitize” the summit.

In any event, the summit is slightly more than a week away and time will soon tell how “big a deal” the law is. As always, if you hear anything on H.R. 347, let us know, and you can also personally urge the Secret Service to respect the First Amendment here.