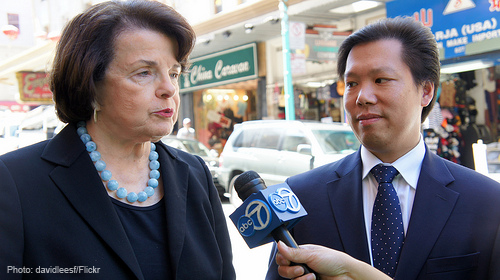 This op-ed originally ran in the San Jose Mercury News before the tech giants released their letter to Pres. Obama and Congress urging widespread surveillance reform.

In August, the Information Technology and Innovation Foundation, a Washington, D.C.-based pro-innovation think tank, calculated that over the next three years, the U.S. cloud computing industry stands to lose as much as $35 billion as international customers find other cloud computing services rather than risk their sensitive data falling into the NSA’s giant maw.

The estimate had to make U.S. tech executives’ knees buckle.

The fear of looking like data aggregators for the National Security Agency has even led tech giants like Apple, Google, Facebook and Microsoft to release transparency reports about government demands and lobby Congress to rein in the spy agency. Shareholders are now pushing AT&T and Verizon to stand up for user privacy and take similar actions.

So if you had to pick a senator who would be especially attuned to Silicon Valley’s fear of how the NSA revelations harm business, a front-runner should be Sen. Dianne Feinstein, D-San Francisco. Yet as chairwoman of the secretive and powerful Senate Intelligence Committee, Feinstein has not only vocally defended NSA’s dragnet surveillance programs, but she also introduced legislation — cynically dubbed a reform measure — that would entrench and expand the NSA’s surveillance powers.

Feinstein’s FISA Improvements Act would be a dream come true for the NSA. What was once done in secret with little oversight would get congressional approval. The bill would codify the NSA’s unconstitutional call-records program and allow bulk collection of location data from mobile phone users.

Most egregiously, Feinstein’s bill allows undefined “law enforcement agencies” to query its foreign intelligence databases, even for U.S. persons, without a warrant. Perhaps even our own local police could try to use its federal law enforcement relationships to get around using court orders to investigate people it doesn’t have probable cause to scrutinize.

If Feinstein’s legislation were to pass, it would show the world that Congress no longer respects its citizens’ fundamental privacy rights. And if Congress couldn’t care less about protecting Americans’ privacy, what kind of message would that send to the rest of the world, already enraged and frightened by the NSA’s insatiable global surveillance? What kind of scarlet letter would that put on America’s most popular technological brands?

After seeing the Feinstein bill for what it is — an NSA wish list — it’s no wonder major technology companies sent a letter of applause to the bipartisan members of Congress behind the USA FREEDOM Act, which limits NSA surveillance and brings the surveillance programs out into the sunlight.

Since the rise of Facebook and social media in general, there’s always been a pernicious myth that people no longer care about their privacy because of how much information they reveal online. Thankfully, the global reaction to the NSA’s project to make privacy extinct shows just how very precious privacy remains to people, no matter where they call home or on what side of the political aisle they may sit.

Privacy isn’t just a human right; it’s essential for business. America’s most dominant tech industries are already threatened with paying a very high price for the NSA’s overreach, which Feinstein says she largely knew about, supported and enabled.

If Feinstein has her way, she won’t only irreparably harm everyone’s privacy rights, but also the nation’s economic competitiveness globally. Talk about a lose-lose situation.