Smokey Says, Get a Permit, Shutterbug 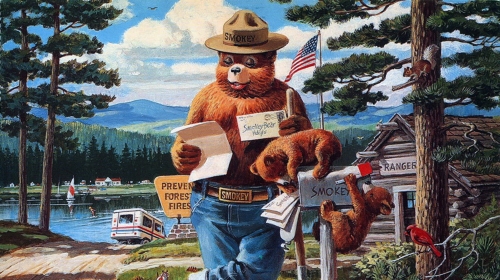 First Amendment advocates have expressed escalating concern in recent days over a U.S. Forest Service rule requiring permits for photographers in national forests. In particular what is at issue is a new proposed Forest Service regulation that attempts to clarify and make permanent an already existing permit requirement for certain photographers.

Many news reports, such as this one in the Washington Post, suggest that the requirement applies to all photography and filming—including mobile phone pictures and news-gathering—on all national forest land, and will impose a $1,500 fee per permit. By contrast, Forest Service Chief Tom Tidwell told the Associated Press that nothing in the regulation “infringe[s] in any way on First Amendment rights” and that permits will not be required for “any part of the news.” Earlier this week, service officials had said permits would be required for anything other than “breaking news.”

I’m not sure either the news reports or Chief Tidwell are getting it quite right. And, although the governing regulations and laws are far from a model of clarity, I think by any reading the proposed regulation still raises a number of important free speech issues, which I’ll get to once I parse what appears to be going on.

First, the permitting regulation has been on the books for about four years but some reports suggest it was unenforced, or at least selectively enforced. The recent proposal, released in early September, would tack on additional criteria to the current framework for deciding whether to issue a permit (which can be found in section 45.51b in this chapter of the Forest Service Handbook).

According to the handbook, permits are required for two types of activities. You need a permit for “commercial filming,” regardless of where it occurs. And you need a permit for “still photography” that requires props, sets, or models; could impose administrative costs on the Forest Service; or takes place at a location where the public is normally not allowed.

Commercial filming is defined broadly as any moving image or sound recording that could generate income. The only carve-out is for “breaking news,” which is defined as an “event or incident that arises suddenly, evolves quickly, and rapidly ceases to be newsworthy.” Still photography is defined circularly as any photography that takes place in a non-public part of the forest, uses props etc., or could impose administrative costs on the service.

So, while the Forest Service isn’t requiring a $1,500 fee for any old tree picture, the framework they’ve set up certainly poses a host of First Amendment issues.

Just to start, the carve-out for “breaking news” means that any other newsgathering activity that would qualify as “commercial filming”—in other words, all “non-breaking” newsgathering that could generate income and involves audio-visual recording—is subject to the permit fee, even in places where the public is allowed. The concern here is twofold.

First, the rule as a whole unfairly singles out the press. If I’m on Forest Service land taking a cell phone video of, for instance, lax maintenance activity, I’m free to do so. A local news station taking the same video would likely be subject to the permitting requirement, assuming the lax maintenance isn’t “breaking.” That’s likely unconstitutional, not to mention bad policy. Second, the awfully vague definition of “breaking news” gives Forest Service officials the discretion to arbitrarily deny journalists permits, or fine them for not getting one, by claiming the story isn’t “breaking.”

There are even bigger problems, however. The rule the Forest Service proposed in early September—the one that really started this whole kerfuffle—sets out several new criteria by which the service should evaluate permit applications. The service “may” issue a permit for anything other than “noncommercial still photography” (that is, commercial still photography and all other audio-visual recording including non-breaking newsgathering) if the activity meets, among others, the following criteria:

This poses two, potentially severe, problems. First, the “primary objective” criterion is desperately vague and again could be used arbitrarily by administrators to block filming or photography that depicts the Forest Service—or any other government agency—poorly.

Second, the permit requirement for advertising would likely have serious unintended consequences. While I guess we might want to keep national forests free of rampaging Don Drapers, the criterion could also apply to, say, the Sierra Club filming an advertisement seeking members. Clearly the Sierra Club offers a “service”: protecting the pristine beauty of our national forests. If the permit requirement dissuades groups like the Sierra Club from engaging in constitutionally protected activity on public lands, which it very well may, it poses concerns of constitutional moment.

Additionally, and I’m not being silly here, I don’t think the rule would apply to Smokey the Bear. If this would allow “only you can stop forest fire” commercials sans permit, but chill private activity, it poses free speech concerns. Consider a rule that says government advertising promoting the Affordable Care Act is permissible in Lafayette Park in front of the White House, but private advertising opposed to the law is verboten absent a costly permit. Granted, in the Smokey example, you’re not imposing a fee on people supporting forest fires, but favoring government speech over private speech is a problem anywhere we find it.

Finally, it’s worth noting one foundational flaw in the regulation—it needlessly picks on photography. The goal of the regulation is clear and laudable: to prevent harm to national forests. Why not just write a rule that imposes rational limits on commercial activity in places where it could harm the forests, irrespective of the activity involved? As is becoming increasingly clear in the cases upholding a constitutional right to record police activity in public, photography has an inherently expressive quality that requires special caution. That it’s being singled out here is a problem.