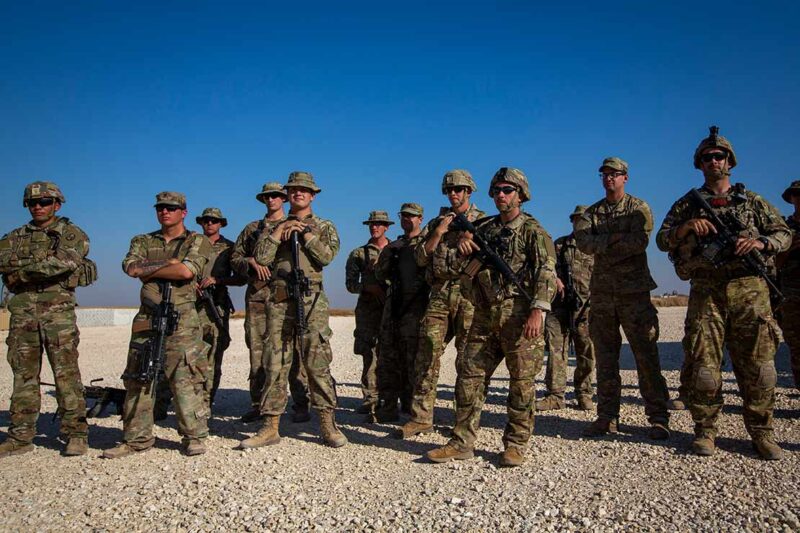 Victims of America's war crimes had little means of accountability. Now, even that is being eviscerated.

Last month, in an unprecedented move, President Trump pardoned war crimes charges against three U.S. military service members. The decision provoked opposition from former military leaders and many veterans, but was applauded by some lawmakers and media.

The three men forgiven by the president — Lt. Clint Lorance, Maj. Mathew Golsteyn, and Chief Edward Gallagher — had committed or were accused of horrifying crimes. Lorance was serving a 19-year prison sentence for ordering the murder of two unarmed Afghan villagers. Platoon members who turned him in described Lorance as aggressive, ordering them to shoot indiscriminately at civilians in order to “make them afraid of us.” Golsteyn was set to go on trial next year for killing an unarmed Afghan man.

Gallagher was charged with shooting at civilians for sport, including an Iraqi school girl and an elderly man. Witnesses testified that he stabbed a wounded teenage captive multiple times and posed with his mutilated corpse. Eventually convicted on a minor count of bringing discredit to the armed forces, Gallagher was demoted one step. Overriding internal military processes, the president restored his rank.

President Trump’s intervention evinces a callous disregard for the lives of victims and survivors, the rule of law, and the military justice system. For him, it was irrelevant that the service members violated clearly established laws of war. The fact that they did so while wearing an American uniform made them beyond reproach. “We train our boys to be killing machines, then prosecute them when they kill!” he lamented on Twitter in October.

Citing harms to the integrity of the military legal system and undue command influence, former military leaders expressed concern that the pardons may encourage more impunity for war crimes. They aren’t wrong, but they are very late.

This country has been on a war footing for more than 18 years, with no end in sight. Since U.S. troops were first stationed in Afghanistan and Iraq, there have been numerous reports of war crimes committed by service members and military contractors. A self-described “kill team” was accused of hunting Afghans for the thrill of it. There was systemic abuse of prisoners by the military and the CIA in Afghanistan and at Abu Ghraib. Contractors massacred Iraqi civilians in Fallujah and Haditha and Nisour Square.

American systems of civilian and military legal accountability for crimes and other abuses committed since 9/11 have not held up. Some of the troops accused of being involved in these horrific incidents were never charged or were acquitted. Others received a slap on the wrist. Virtually no senior level official has been held meaningfully accountable for systemic wrongs. The record of incomplete accountability for war crimes in Afghanistan prompted the International Criminal Court prosecutor to seek authorization for a war crimes investigation, an effort that the Trump administration tried to scuttle but is now on appeal — arguments took place in the Hague last week.

It may be tempting to view the Trump pardons as exceptional, yet another example of denigrating established norms. It is true that no other president has pardoned war crimes as Trump has done. It is also true that the record of accountability for abuses committed in the name of America’s fight against terrorism is abysmal.

But that poor accountability record started in the Bush administration and continued during the Obama administration. By looking forward as opposed to looking backward, this country failed to reckon with some of the most shameful episodes in its recent history. No senior U.S. government official has been held accountable for authorizing the CIA’s torture program. The military detention camp at Guantánamo Bay, where many survivors of CIA and military torture were imprisoned without charge, still holds 40 men.

Victims and survivors of illegal and abusive U.S. counterterrorism policies have found it exceedingly difficult to obtain justice in U.S. courts. Courts give excessive deference to executive branch justifications and secrecy in cases implicating national security. As a result, government officials have largely been shielded from liability. Courts have also abstained from deciding the legality of controversial counterterrorism policies such as the lethal strikes program abroad, which has targeted U.S. citizens with drones and killed many hundreds of civilians, at least.

Litigants challenging abuses committed on U.S. soil have hardly fared better. In the immediate aftermath of the September 11 attacks, the FBI detained hundreds of Arab and South Asian immigrant men and treated them as terrorism suspects because they were Muslim. The detainees were confined for months in maximum-security prisons and subjected to harsh treatment. In two separate cases challenging this detention policy, the Supreme Court ruled in favor of limiting accountability for federal officials. The Court even made it harder for victims to bring civil rights lawsuits and limited the ability of plaintiffs to obtain damages when federal officials violate their constitutional rights.

As avenues for redress for victims narrowed over the years, the military legal system offered some reassurance — however imperfect — that flagrant violations of the law would at least be investigated. Trump’s pardons are sabotaging even that avenue. We owe it to the victims of America’s abuses to start grappling with the tremendous harm that our counterterrorism policies have caused, and strive to repair this harm by holding perpetrators accountable.