"Victims of Complacency": Trafficking and Abuse of Migrant Workers on U.S. Military Bases 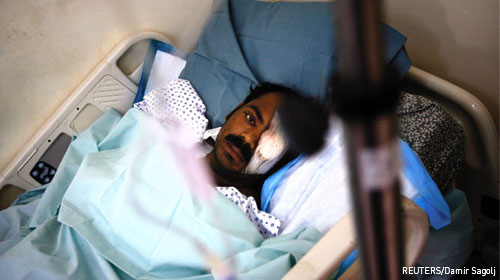 Ramesh, a college graduate from India, borrowed $5,000 from a loan shark to pay a recruiting agent for the opportunity to work in Kuwait as a storekeeper at a wage of $800/month. His aims were simple: to provide a better life for himself and his family. Instead, Ramesh was trafficked to a U.S. military base in Iraq where he was compelled to work as a janitor for $150/month. This paltry sum meant that Ramesh was unable to meet his loan repayments. In a cruel attempt to intimidate him into making his payments, the loan shark sexually assaulted Ramesh’s sister and seized the family home.

This story, recounted in the just-released, joint ACLU-Yale Lowenstein International Human Rights Clinic report, “Victims of Complacency”, is but one example of the price that many migrant workers have paid and continue to pay for the opportunity to work on U.S. military bases and other U.S.-run facilities around the world.

These migrant workers, often referred to as “third-country nationals,” or “TCNs,” have become an indispensable part of the daily lives of our troops in the wars and their aftermath in Iraq and Afghanistan. Like Ramesh, TCNs come mainly from developing countries such as India, the Philippines, Nepal and Uganda, and are contracted to perform low-paid but essential services as cooks, janitors, cleaners and mechanics on U.S. military bases worldwide. In 2011, there were more than 60,000 TCNs contracted to work in Iraq and Afghanistan alone. And while the U.S. military has largely been replaced by the State Department in Iraq, thousands of contract workers, many of whom are TCNs, remain in the country to provide services to the U.S. embassy.

“Victims of Complacency,” together with hundreds of pages of documents obtained by the ACLU through a Freedom of Information Act (FOIA) request, details the trafficking, forced labor and other abuses that thousands of TCNs have suffered since 2003. The report also provides a concrete set of detailed recommendations to Congress that are aimed at preventing future abuses.

As the report documents, the trafficking and abuse of TCNs in Iraq and Afghanistan is facilitated by the U.S. government contacting and sub-contracting process. The U.S. government, often through the Department of Defense or State, will award prime contractors, U.S.-based corporations such as Kellogg, Brown & Root (KBR), logistics contracts to service the U.S. military on bases in Iraq and Afghanistan. These government contractors in turn subcontract to other contractors, most of them located in the Gulf States or the Middle East, that then contract with local recruiting agencies in the workers’ countries of origin. Workers like Ramesh, enticed by promises of high paying jobs in the Middle East, take out loans from local loan sharks to pay recruiting agency fees for the promise of high-paying jobs overseas. Some workers get lucky; their recruiting agencies don’t charge them a fee and are honest about the location and pay of their work. However, many workers are not so fortunate. Like Ramesh they end up paying exorbitant recruitment fees to secure jobs that pay much less than advertised and that are located in different countries than indicated on their contracts (Iraq and Afghanistan instead of Kuwait or the United Arab Emirates), or sometimes don’t even exist. Often, these jobs come with unsafe and unhygienic living and working conditions. Fearful of losing their jobs and defaulting on their loans, which often mean the loss of their livelihoods back home, these workers continue with their contracts in spite of these conditions. Contractors, who are often aware of the precarious financial situation of many TCNs, take advantage of and will threaten the workers with termination if they make complaints about their poor working conditions and pay.

“Victims of Complacency” also highlights how the government contracting process opens the door to corruption and waste of U.S. tax-payer’s dollars by U.S. military contractors. For example, the bipartisan Commission on Wartime Contracting noted in its 2011 report that contractors bill for TCNs at an average rate of $67,600 to perform food services and other menial tasks. Yet, TCN salaries often range between $150-$500 a month, or $1800-$6000 per year. Since TCNs are often charged for their recruitment and transportation into Iraq and Afghanistan, it is unclear what causes such a large discrepancy between contractor billings and TCN salaries.

Despite media and government reports on TCN trafficking and abuse and contractor malfeasance, in the past ten years not a single military contractor has been prosecuted by the government. Nor is there evidence that military contracts are ever terminated due to contractor trafficking violations. However, as the ACLU-Yale report notes, the United States government can address future trafficking, abuse, and corruption in government contracts in Iraq and Afghanistan by taking small, but important steps to improve the oversight of the contracting process and more effectively enforce existing laws and policies, including U.S. anti-trafficking laws. “Victims of Complacency” makes a number of concrete recommendations on how greater oversight may be introduced and how U.S. laws may be employed to counter trafficking and abuse of TCNs in the future.

The U.S. government has repeatedly and forcefully stressed its zero-tolerance policy on trafficking; criminal prosecutions and administrative penalties for non-compliant companies should be at the forefront of its enforcement strategy against U.S. contractors that violate U.S. anti-trafficking laws.

As some companies operating in Iraq and Afghanistan have demonstrated, the adoption of stricter hiring and employment standards, aimed at preventing trafficking and abuse of TCNs, are not a pipe dream. “Victims of Complacency” highlights that FSI Worldwide, a British contractor, has hired workers from Nepal, India, and Kenya for positions in Iraq, Afghanistan, and the UAE. FSI “transfer[s] the cost of recruitment from the TCN to the contracting company, eliminat[es] recruiting agents and us[es] only trusted senior personnel to conduct recruitment, and ask[s] recruits to sign non-payment declarations and to report any attempts by staff to extort money.”

TCNs migrate to find work, to provide for their families, and to save for a better life. The responsibility lies with the U.S. government to ensure that these workers—who provide valuable services to our troops and embassies—are not trafficked, forced into indentured servitude, or otherwise exploited on the taxpayer’s dime in violation of U.S. and international law.