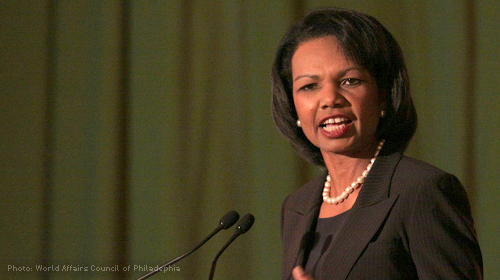 A video meant to be presented at yesterday’s dedication of the George W. Bush Presidential Library and Museum featured Condoleezza Rice defending the decision to torture detainees. The clip was obtained by Foreign Policy and is featured below.

This should come as no surprise: many of the senior officials involved in the decision to torture have been vocal advocates of torture since leaving office. In addition to serving as secretary of state and national security advisor, Rice chaired the National Security Council when the CIA asked the council to approve the use of specific interrogation techniques on specific detainees. The council, as we know, said yes.

What comes as a bit of a shock, perhaps, is how candid Rice is about the role of President Bush himself in authorizing torture. We already know from his autobiography that he took pride in his decision to authorize waterboarding. Now Rice has confirmed that President Bush himself was involved in vetting the CIA’s request for approval to torture. Take a look:

Rice ends her video defense of her former boss by arguing that torture kept us safe in the years after 9/11. We couldn’t disagree more. Even leaving aside the fact that the inspector general of the CIA itself would not accept that the so-called “enhanced interrogation techniques” worked (you can read the full report here), Rice’s argument ignores the enormous damage that torture did to our national security. Torture served as a recruiting tool for our enemies, and experienced American interrogators dissented from the use of torture, arguing that it didn’t work and would produce false statements that would waste time, even if it occasionally produced truthful ones.

The level of denial among torture supporters is astounding in the face of all of the evidence confirming that U.S. policy was in fact torture, including this month’s comprehensive bipartisan report from The Constitution Project. Rice’s comments shed some new light on President Bush’s personal involvement in the torture program, but the American people deserve to know all of the facts, which is why the Senate Intelligence Committee should release its own findings on the program.

Most importantly, though, torture is criminal and simply un-American. It violates our ideals, our basic sense of human dignity, and our laws. That senior officials approved its use is an unfortunate truth that we must reckon with fully if we are to turn the page on this dark chapter in our nation’s history. We must officially acknowledge the wrongs that took place, provide a measure of redress to the victims, honor the American heroes who objected to torture, and investigate those responsible.