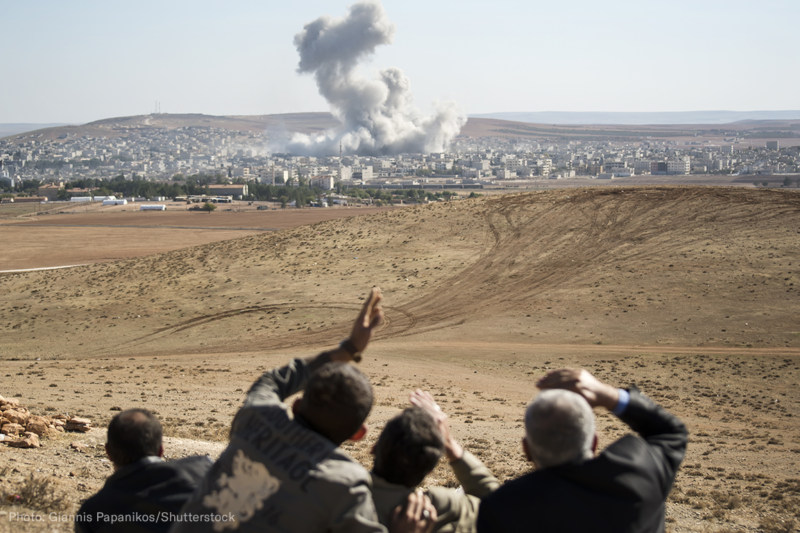 The United States’ war with al-Qaida has gone on so long, and has metastasized into so many different uses of U.S. armed forces around the globe, that it may be surprising to learn that the federal courts have only addressed the legality of a very small piece of it.

After the 9/11 attacks, Congress passed a statute authorizing the executive branch to use military force against those groups directly connected to the attacks: al-Qaida and the Taliban. But today, the United States claims the authority to use armed force under that statute not just in Afghanistan, but also in Iraq, Yemen, Somalia, Pakistan, and Syria — against not just al-Qaida and the Taliban, but also al-Qaida in the Arabian Peninsula, al-Shabab in Somalia, and now the Islamic State in Iraq and Syria, or ISIS.

But no court has ever addressed the government’s legal justifications for military action in so many different parts of the world. Now, in a case brought by the ACLU, one court will. The federal district court in Washington, D.C., will address whether the executive branch can use its elastic and open-ended assertion of wartime authority to imprison indefinitely an American citizen with no connection to 9/11.

In September 2017, Kurdish forces detained an American citizen in Syria and quickly transferred him to U.S. custody. On Sept. 14, the Daily Beast reported the detention, and the government confirmed it was holding the citizen as a “known enemy combatant” for ISIS. For weeks, the government refused to reveal any public details about the detention, to bring that person before a judge, or charge him with a crime. The ACLU went to court on the unnamed citizen’s behalf, demanding that the government justify his detention to a federal court. Since the court ruled in December that the government must allow the ACLU to meet with the citizen, we have represented him as our client.

Weeks ago, the government filed — under seal, and not available to the public — its legal and factual reasons for holding the citizen without charge or trial. (It will be filing a public, partially redacted version soon.) Today, the ACLU filed a response, explaining why under the Constitution and laws of the United States, the government lacks the authority to continue holding our client as a military detainee.

At this stage, our client is challenging only the government’s arguments concerning its legal authority to detain him assuming that he was a member of ISIS at the time of his detention. While that accusation is simply wrong — our client was actually kidnapped and imprisoned by ISIS, tried to escape, and never took up arms against the U.S. or anyone else — a detailed refutation of the government’s allegations will come at a later stage, if necessary. At this stage, because the government has not filed any criminal charges against him, litigating the government’s accusations would prolong his unlawful detention and strip him of the safeguards afforded by criminal court proceedings.

The government’s arguments regarding its legal authority to detain our client are breathtaking in their scope.

First, the government claims that a 2001 statute, the Authorization for Use of Military Force, gives it the power to detain our client. But that statute, which was passed in the days following 9/11, expressly limited its authorization of force to those responsible for the attacks — in other words, al-Qaida and the Taliban. Moreover, when Congress gave that authority to President Bush, it rejected the executive branch’s attempts to convince Congress to grant it open-ended authority to take military action against future threats without returning to the legislative branch.

Even so, the government now claims that the 16-year-old AUMF authorizes the detention of a U.S. citizen who is totally unconnected to the 9/11 attacks, al-Qaida, or the Taliban. It does so by attempting to draw a daisy-chain of connections between al-Qaida in Afghanistan and a terrorist group founded in 2003 in Iraq called Jam’at al-Tawhid wa’al Jihad, which later renamed itself al-Qaida in Iraq. The government says that the Iraqi group was started by an “associate” of Osama bin Laden, “aligned” with al-Qaida sometime after 2003, and then effectively morphed into ISIS around 2006. According to the government, the 2001 AUMF covers ISIS because, more or less, ISIS is al-Qaida.

The government’s argument falls apart on examination. In determining whether detention is lawful under the 2001 AUMF, the courts have thus far looked only to whether that detention was lawful at the time of capture. Whatever relationship al-Qaida had with ISIS was torn asunder in 2014, and now the two groups are in open armed conflict with each other in Syria. The government’s allegations against our client, who was captured in September 2017, thus fall nowhere near the scope of the 2001 AUMF.

The government also claims two other sources for its detention authority. First, it construes a 2002 Authorization for Use of Military Force against the Saddam Hussein regime in Iraq as authorizing detention to combat any and every threat emanating from Iraq, effectively indefinitely. But the 2002 statute does not remotely allow such an extension — and in 2014, the government openly abandoned all reliance on it.

Second, the government reprises one of the most extreme arguments of the Bush administration: that the president has inherent authority as commander-in-chief to detain U.S. citizens, anywhere and everywhere, as he sees fit. No court has ever suggested, let alone held, that the president has unilateral authority to imprison an American citizen without trial — unless Congress suspends habeas corpus (the legal right to be brought before a judge to challenge the legality of one’s detention) which, of course, it has not done.

Our client’s case will be the first time the government’s theory concerning its ability to use force against ISIS gets tested in court. When the Obama administration first announced that it claimed such authority in 2014, responses across the political spectrum were scathing. Jennifer Daskal, who had served in the Justice Department in that administration, wrote that “re-interpretation of laws in totally implausible ways shakes the principles of legality at its core.” Jack Goldsmith, who worked in the Bush Defense and Justice Departments, called the theory “breathtaking,” explaining that if ISIS’s “remarkably loose affiliation with al Qaeda brings a terrorist organization under the 2001 law, then Congress has authorized the President to use force endlessly against practically any ambitious jihadist terrorist group that fights against the United States.”

As the Supreme Court has famously said, Congress does not “hide elephants in mouseholes.” It certainly did not hide an extraordinary authority to engage in indefinite and limitless global war in legislation explicitly tied to a single terrorist attack 16 years ago.