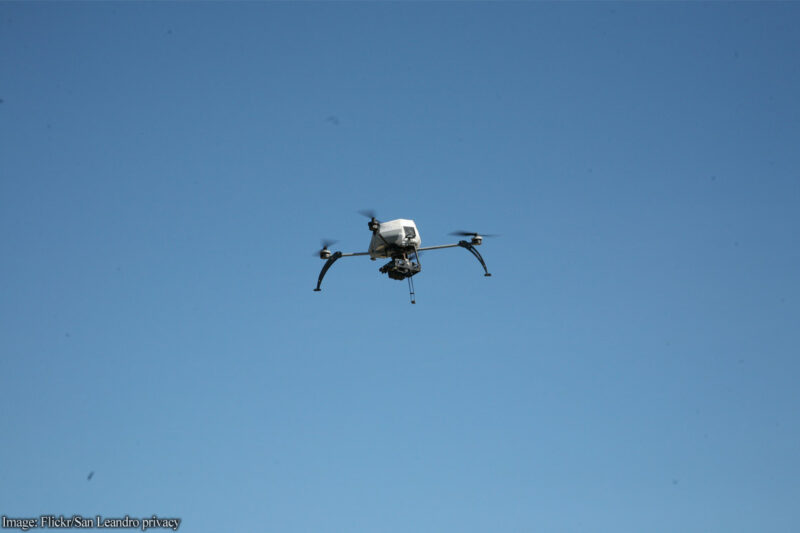 Who needs local laws to require a transparent, democratic process before local police can buy new surveillance technologies? After a mysterious drone flight over a Jamaica Plain housing project, and the ensuing confusion among officials about exactly what happened, it’s clear Boston does.

On Saturday, July 15, 2017, neighbors approached Jamaica Plain resident and community activist Corey McMillen with some startling news: there was a drone flying around their housing project. Corey went outside to look, and sure enough, he saw two Boston Police squad cars, two officers, and a buzzing drone with a red light on it. “One officer had the drone in his hand,” McMillen told the Boston Globe. “He let it go and flew it 20 to 25 feet in the air. He seemed to be testing it out.”

After Corey confirmed with his own eyes what his neighbors had seen, he called me. “Some Boston Police officers are flying a drone in my community,” he said. I was startled. After all, the Boston Police Department had never announced that it planned to purchase any drones. I pay close attention to law enforcement surveillance in Boston and surrounding areas, and this was the first I’d heard about the BPD using drones. I asked Corey to take some photos, which he promptly did, and told him I’d look into it.

On Monday, two days after Corey told me what he’d seen, I filed a public records request with the Boston Police Department to learn more. I asked the BPD for budgetary records, technical specifications, internal policies and memoranda, and records that could tell us more about what exactly the BPD officers were doing flying a drone in Jamaica Plain on July 15. Specifically, I asked for any document containing a legal justification for deploying the drone that day, as well as the video, images, or audio the drone collected on its flight.

The BPD’s response was troubling.

The Department said it had no record containing a legal justification for deploying the drone Corey and his neighbors had seen; no policy to govern the Department’s use of drones; and no video, images, or audio from the drone flight on July 15. The only documents the BPD disclosed were purchase orders and Federal Aviation Administration certifications for three drones. The records show the BPD purchased its drones in January, February, and March of 2017, for a total of $17,454.

When I filed the public records request, I was seeking a paper trail to help me and Corey and his neighbors understand why BPD officers were flying a drone in his neighborhood that Saturday in July. Unfortunately, the Department’s response to my records request didn’t provide any clues.

The story got stranger still when a Boston Globe reporter asked the police about the incident. According to a BPD spokesman, the BPD’s drones are still in their packaging, and they’ve never been used. A spokeswoman for Mayor Marty Walsh told the Globe that “no sanctioned official use of drones has been permitted or conducted by BPD.”

There seem to be three possible explanations for this discrepancy. The first is simple: the Department is misrepresenting what happened. Another possibility is that, without prior approval or authorization, some BPD officers took one of the Department’s drones out for a test drive-in a low-income, majority Black neighborhood. The only other thing that could have happened is that some BPD officers tested out a personal drone, while wearing their uniforms and standing next to their Department-issued cars.

None of these scenarios reflects well on the BPD. Regardless of whether this was a sanctioned test operation or the work of a couple of rogue officers outside the chain of command, the incident and the Department’s response to it underscore two critically important facts about surveillance in 21st century America. These are lessons we cannot afford to ignore.

First, communities of color and low-income communities are often the canaries in the coal mine of the digital surveillance state. These police officers were not photographed testing a drone out over West Roxbury, a predominately white community home to many Boston Police Department officers. Instead, they were testing the technology on a predominately Black, low-income community at a Jamaica Plain housing project. Unfortunately, in Boston and across the nation—and throughout US history—we’ve seen the same story unfold time and again. It’s wrong and it must stop. Police departments should not treat communities of color as testing grounds for the latest surveillance toys.

Second, the Boston Police Department should have consulted with the public and our democratically elected representatives before buying these drones in the first place. According to the Globe, City Council President Michelle Wu didn’t know the BPD had purchased drones until a reporter called her seeking comment about it. Had Corey not seen the drones and contacted the ACLU, it’s more than likely that Councilor Wu and the rest of the city would still be in the dark about the BPD’s drones. This is a problem we’re seeing across the country: police departments deploying sensitive new surveillance technology without telling, let alone asking permission of, the communities they serve.

In Cambridge and Somerville, like in cities across the country, activists are mobilizing to pass local laws to require a public, transparent, and democratic process before police departments can acquire new surveillance technologies or military equipment. These laws require the police to describe in detail how they want to use new tech before they buy it, and mandate a public process for the development of privacy policies to govern its use.

If we had a law like that on the books in Boston, it’s likely that none of this would have happened.

Jamal Benjamin, a neighbor of Corey’s at the Hailey Apartments in Jamaica Plain, told the Globe the drone made him feel uneasy in his own community. “What is this drone doing out there?” he asked. “Now I’m feeling uncomfortable, like someone’s keeping tabs on me without my knowledge.”

If you want to make sure something like this doesn’t happen again, when the next hot surveillance technology inevitably arrives on the scene, contact the Boston City Council and Mayor Walsh and tell them you want Boston to pass a law to require community control over law enforcement surveillance technology. Or the elected officials in the city or town you live in.

Cross posted from the ACLU of Massachusetts PrivacySOS blog