Building a Mass Surveillance Infrastructure Out of Light Bulbs 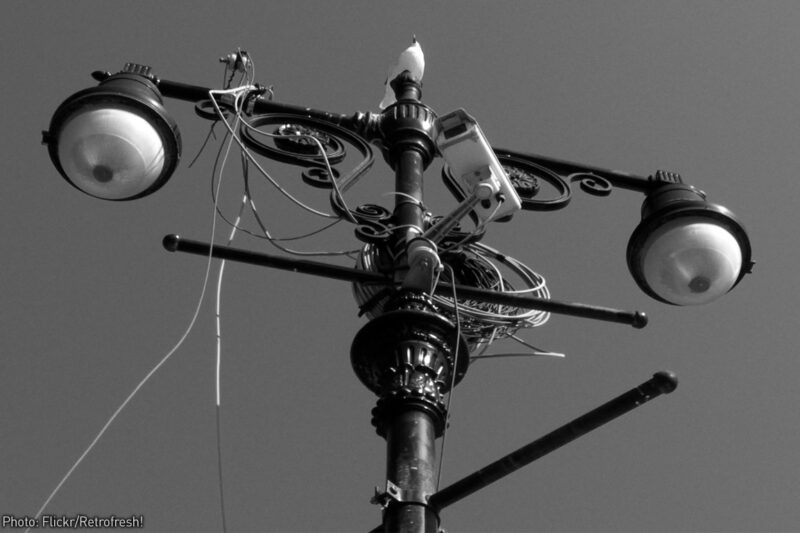 For almost a quarter century, General Electric’s corporate slogan was “GE: We Bring Good Things To Life.” Well, based upon a report in Sunday’s New York Times, the company may want to dig up that old slogan, repurpose it a bit, and roll it out as “GE: We Bring Mass Surveillance To Lights.”

According to the Times, “using a combination of LEDs and big data technology,” everyday street lights, as well as those used to illuminate parking lots, store interiors and other locations, will soon be equipped for mass data collection. Of course, the soft sell for this hybrid product—which, as reported by the Times and Reuters in 2013, is manufactured by several companies including GE and Sensity Systems—is based around largely benevolent goals. For one thing, the LED bulbs are far more energy efficient than the light fixtures currently used by most cities. That’s good. They also point out that the built in monitoring features can be used to ease traffic congestion and sense when garbage cans are full. Who wouldn’t like that? Of course, there’s more. These lightbulbs-of-the-not-so-distant-future will also be able to GPS track individual shoppers as they travel through stores. Wait. What? The light bulbs can function as tracking devices? We would have to imagine that if they can GPS-track shoppers in stores, they could work just as effectively to track people as they walk the streets of our cities and towns. In fact, if you traveled through Newark Liberty International Airport in the past year, these spy-bulbs lights were already watching you. And there’s more: the bulbs can be programmed to “pick() up on suspicious behavior.” What exactly does that mean? If two women wearing head scarves decide to chat in a parking lot after seeing a late night movie, are the police going to be notified?

I always figured Big Brother was going to be some giant face on a wall, not a tiny camera hidden inside a light bulb.

The ACLU strongly opposes the creation of infrastructures for ubiquitous mass surveillance including the widespread deployment of lightbulb spying technology. But what is particularly troubling here is the stealthy way in which the product is being marketed and pitched to the press; to wit, as an energy efficient light bulb with built-in monitoring technology. Given the limited use of the product as a lighting device and the broad scope of its tracking and surveillance features, what this product really appears to be is a mass surveillance device being disguised as an LED light bulb. I would bet that if we could see a breakdown of the device’s production costs, the lightbulb versus surveillance technology discrepancy would be equally pronounced.

There are no doubt an increasing number of cameras in our public spaces, but it would still be a big deal for governments to construct giant, stealth surveillance networks that are under their centralized control. And although these surveillance bulbs may have beneficial uses, I think we would be far better off keeping our privacy, finding other ways to combat full trash cans and traffic congestion, and not bringing mass surveillance to lights.