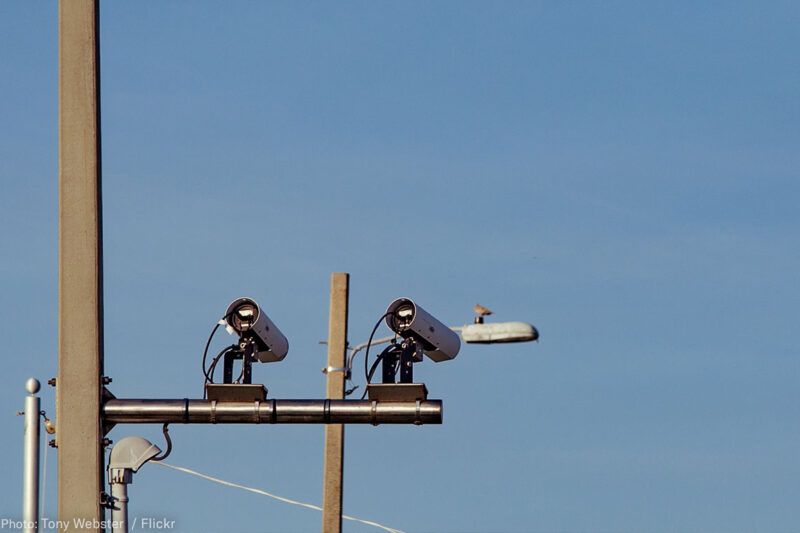 Immigration and Customs Enforcement has recently gained access to an invasive database that will allow it to track immigrants based on their location. The city of Alameda, California, will have no part in it.

Since last month, ICE has been able to tap into a nationwide database built by a company called Vigilant, which collects license plate and associated location records, to target immigrants while they’re driving to work, running errands, or bringing their kids to school. Vigilant license plate cameras are affixed to thousands of police cars, streetlights, and private tow trucks across the United States. These cameras rapidly collect the location and plate number of passing motorists, feeding 80 million location records per month to Vigilant’s database.

Last week, Alameda, a city of 80,000 residents in California’s East Bay, took a stand. After a public meeting in which residents made it very clear they were uninterested in feeding an ICE surveillance database, Alameda’s City Council rejected a proposed $500,000 contract to purchase Vigilant’s automatic license plate readers for use throughout the city.

If your local police department is one of Vigilant’s 3,000 law enforcement customers, ICE may be able to access data about you and your neighbors. Law enforcement can drill down into the data to build a detailed picture of your private life, including where you work, where you live, when you go to the doctor, and what political demonstrations you attend. ICE’s public documentation says it intends to use this data to help “identify, arrest, and remove aliens from the United States.”

After learning that the $500,000 Vigilant contract was up for approval, Alameda residents arranged meetings with council members to explain their concerns with the proposal. They asked leaders and the police chief about policies that would prevent ICE access to the license plate reader data, impose limits on data retention, and ensure compliance with the city’s sanctuary policy. Activist groups like Oakland Privacy and the Alameda Progressives elevated these critical questions and encouraged residents to show up.

City council members ultimately decided they didn’t want to sign a new contract with a company that counts ICE as a customer. After public comment and debate, the council refused to approve the contract. The council directed city officials to adopt strict safeguards on any future use of the technology, and left the door open to alternatives that can serve public safety goals.

The dangers of using license plate readers without safeguards have been apparent for a long time. For nearly a decade, American communities have rushed to deploy these devices with funding from Homeland Security grant programs. The Trump administration is now moving to exploit these local systems.

To stop ICE from exploiting surveillance systems, other cities should follow Alameda’s lead. If you don’t know whether your local police department shares license plate data with ICE, you should ask your city council. This is something you can do even if you don’t live in a sanctuary city.

When it comes to tracking our communities, license plate surveillance is just one part of the problem. Police departments are also moving to adopt technologies such as facial recognition and drones — powerful tools that can easily be misused. Communities should insist on a robust public debate before acquiring these technologies, and can ensure that happens by adopting legislation that requires the kind of transparency and oversight on display in Alameda.

A nationwide effort called Community Control Over Police Surveillance offers a model ordinance that does just that. Nashville adopted a CCOPS law earlier last summer, and Seattle just voted to strengthen its first-in-the-nation surveillance ordinance. Oakland and 17 other U.S. cities are actively considering their own surveillance oversight bills.

BRING CCOPS TO YOUR COMMUNITY

It’s time to reexamine our neighborhood surveillance systems, and to prevent new unaccountable ones from taking hold. Alameda shows that it’s possible.