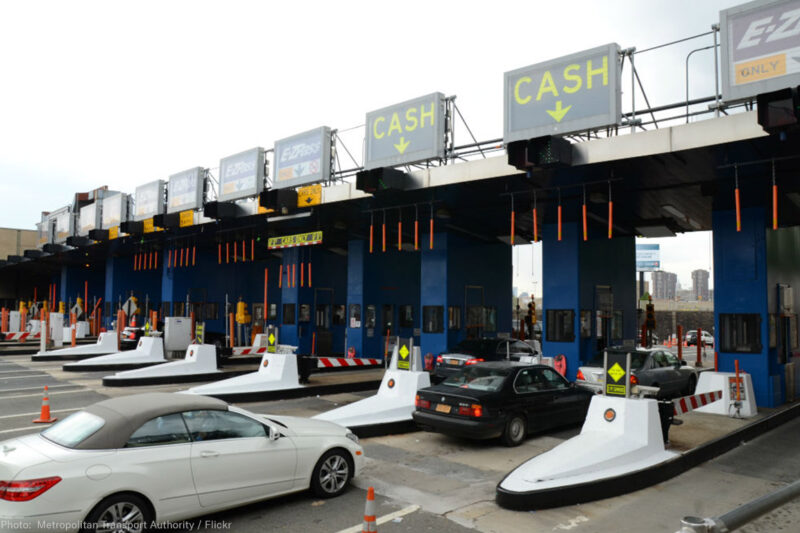 Missing from that executive order? Any mention of people’s privacy rights.

Imagine making your daily commute with the government tracking where and how fast you are going every time you drive through a toll. In this world, the state, federal government, and for-profit corporations can see that information and use it to pinpoint your location and travel habits. Thousands of detailed scans about your travel habits are kept in a state database, without rules for how the government secures or shares them.

If this toll study ignores privacy rights, this could be the reality in Connecticut.

Connecticut tolls would likely rely on electronic gantries, not the tollbooths of yesteryear. To collect fees, these gantries scan a transponder attached to someone’s windshield and automatically deduct money from a prepaid account tied to the vehicle’s license plate. If someone doesn’t have a transponder or prepaid account, a camera captures an image of their license plate, and the state mails the vehicle’s owner a bill.

Typically, these electronic tolls depend on automatic license plate readers: computer-controlled cameras that automatically photograph license plates (and sometimes, the rest of a vehicle and its occupants); stamp those images with location, date, and time; and upload those images to a central database. Under this system, Connecticut tolls would capture sensitive information about millions of drivers — things like date and time of travel, GPS location, and vehicle speed — and store it in a central database.

Without protections, electronic tolls could enable the state and anyone the state decides to share toll information with to track someone’s travel habits for no reason, raising serious Fourth Amendment concerns. They could also be used for speed enforcement.

This year, Vigilant Solutions, a license plate reader company that has partnered with the Connecticut Capitol Area Police Association, signed an agency-wide contract to provide Immigration and Customs Enforcement with access to its full database of license plate scans. This could allow ICE to find and follow immigrants by tracking cars registered to people who are undocumented or to their friends or family. If Connecticut does not restrict how it shares toll information, state tolls could become an on-ramp for the federal government’s deportation machine.

Immigrants in Hartford have been speaking out about how people are afraid to leave their homes because the city has not protected its surveillance data, including license plate scans, from ICE. Adding statewide tolls to the mix will only increase this fear in communities throughout Connecticut.

This week, the ACLU of Connecticut sent a letter to the state Department of Transportation Commissioner to share our concerns and request a meeting to discuss these issues face to face. With no deadline for when the Department of Transportation needs to complete its study, this fight is far from over. Any study of electronic tolling in Connecticut that doesn’t seriously consider people’s privacy rights would be incomplete.

The good news is that Connecticut has a unique opportunity to get toll privacy protections right. Unlike other states that have recently adopted electronic tolling, Connecticut roads haven’t had tolls since they were phased out in the mid-1980s. If Connecticut is going to spend the time and money to create tolls, the state should at least do it correctly by protecting people from the start.

In those emergencies, the state should require law enforcement to swear under oath that they believe a crime is being committed before handing over access to real-time toll data. The legislature should also require the state to be transparent about what it does with people’s toll information. If law enforcement gets a warrant requesting someone’s toll information, the state should protect that person’s due process rights by notifying them before releasing their data.

Under Connecticut law, police already have to follow these warrant and notification rules if they want to access someone’s personal cellphone communications. The information that tolls gather about where someone is going and where they have been can be just as sensitive and deserves the same protections.

We’re here for the long haul to make sure Connecticut doesn’t bargain away people’s privacy rights for toll revenue.