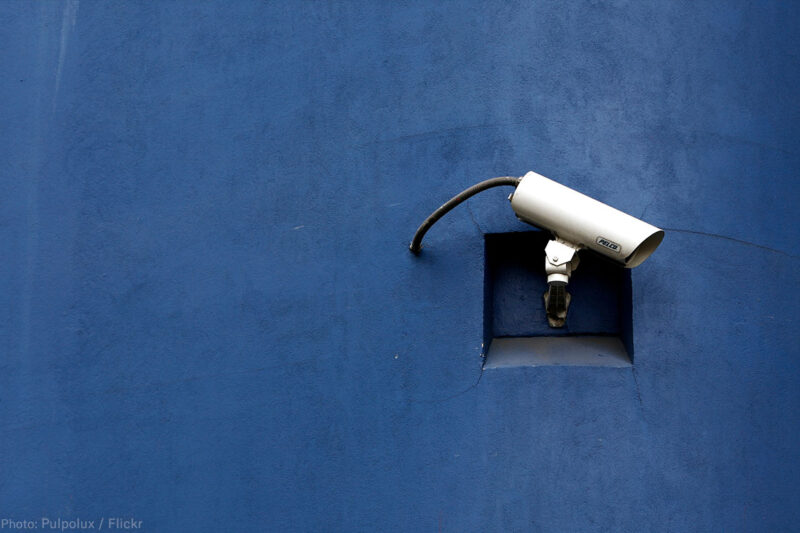 If you’ve been to Detroit recently, you may have seen flashing green lights outside liquor stores, gas stations, and other businesses. The lights, according to police, are supposed to act as a deterrent, warning criminals that cameras are present, streaming real-time images of everyone entering or leaving the premises straight into police headquarters. This is the Motor City’s two-year-old surveillance program, Project Green Light, which its evangelists argue reduces crime at minimal expense to the city’s taxpayers.

The problem with that optimistic prediction is that study after study has shown that there is little evidence, if any, that programs like this work. But there is something we do know for sure: Programs like these violate our constitutional right to privacy by allowing police to peer into our lives without having to bother to get a search warrant.

Constant video streaming to the authorities amounts to an open-ended warrant without probable cause, enabling Detroit police as well as state and federal law enforcement agencies — including the FBI; the Bureau of Alcohol, Tobacco, Firearms and Explosives; and Immigration and Customs Enforcement — to view and record the comings and goings of innocent Americans. This means that even when not open to the public, cameras would capture the inside and outside of restaurants, book stores, and coffee shops, which are common meeting places for many organizations, such as unions, immigrant rights advocates, and religious congregations.

Under Project Green Light, participating local businesses pay about $5,000 to purchase a minimum of four high-definition surveillance cameras and other recording equipment installed. Business owners then shell out $150 or so a month to store the recordings. The police, however, are not very forthcoming about how they position the cameras. It’s uncertain whether they place the cameras to capture footage of the street surrounding the business or of neighboring lots.

In return, police patrol the area, meet with business owners, and gain the ability — though not the obligation — to monitor the live video stream, complete with facial recognition technology, 24 hours a day, seven days a week. Police also promise that any business joining Project Green Light gets first priority when they dial 911. In Detroit, all 911 calls aren’t treated equally — and if business owners want quality service, they’ll have to subsidize the construction of the police’s surveillance apparatus to get it.

Priority service, however, may be an empty promise. It might have been feasible in 2016, when there were only eight participating businesses. But that seems increasingly unlikely. Today there are about 250 members of Project Green Light, which the city hopes to increase to 400 by the end of the year.

Proponents like Detroit Mayor Mike Duggan say Project Green Light reduces crime. “Crime at and adjacent to Project Green Light businesses has gone down 23% since the program began two years ago and carjackings citywide have seen a 44% reduction,” the city website states.

Although there are many reasons to distrust these statistics, the primary reason is that the city hasn’t compared the crime rates at Project Green Light businesses with crime rates at nonparticipating businesses. The city also fails to acknowledge that other factors, such as added police patrols and extra lighting, could play a role in falling crime rates around Green Light properties. Until a comparative study is done and these other variables are taken into account, the city’s numbers are a statistical sleight of hand.

These numbers also seem suspect given that several studies done on surveillance programs show they are far from successful. The ACLU evaluated a similar police surveillance program used in Lansing, Michigan. In 2009 and 2010, we found that major crime actually increased within the 500-foot viewing range at five of the 12 cameras posted around the city.

You would think Detroit leaders would know all this given our history. Twenty years ago, the city spent $600,000 to install 20 rotating cameras on buildings in busy areas. The cameras, which had a 2,000-foot range and could zoom in on cars and people, were monitored by officers at police headquarters. The program, however, was scrapped 14 years later because the city could not justify the cost of maintenance and resources given the minimal results.

City leaders did learn that around-the-clock police surveillance programs aren’t cheap. That may be why they require businesses to pay for it. In fact, officials are considering making Project Green Light mandatory for businesses open after 10 p.m. But that’s not all. City officials want to expand the program to multi-family dwellings, mixed-use developments, schools, and churches.

Maybe Assistant Detroit Police Chief James White was right when he said, “This isn’t Big Brother, and we’re not trying to covertly monitor people.” The city isn’t secretly watching us. They’re doing it openly — and for no good reason.

Eric C. Williams is a Detroit attorney leading the ACLU of Michigan’s committee that opposes Project Green Light. Williams also is the proud son of a retired Detroit police officer, who served the city 20 years.