Help Wanted: How You Can Act Locally To Stymie Trump’s Agenda 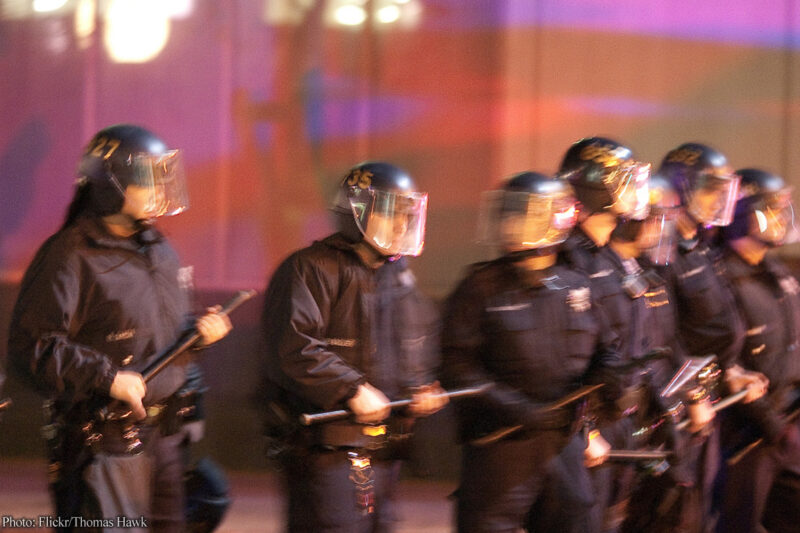 Donald Trump told the American public, repeatedly, that upon taking office his policy agenda will include efforts to identify and immediately deport millions of undocumented immigrants, to track and surveil Muslims throughout the country, and to push for even more aggressive policing against communities of color. He may play fast and loose with facts, but when it comes to his most outrageous campaign promises, Trump is showing himself to be a man of his word.

But here is a wrinkle worth noting: President Trump will need more personnel than are available to him on the federal level to fully execute these policies, which involve targeting tens of millions of people. He is going to need to enlist the help of local law enforcement. This is why the President recently signed an executive order, as The New York Times reported, to revive “programs that allow the federal government to work with local and state law enforcement agencies . . . to share information to help track and deport” immigrants. A key component of this plan is the full-throttle return of a controversial program called Secure Communities, “in which federal officials use digital fingerprints shared by local law enforcement departments to find and deport immigrants” who are alleged to have committed even the most minor crimes.

But the expansion of Secure Communities is only the tip of the iceberg. To pursue his agenda against immigrants, Muslims, and communities of color, President Trump will need a lot more local police assistance than just the sharing of fingerprint data. But this broader assistance may be hard to come by. Many cities are outwardly hostile to President Trump’s agenda, while others may simply not be willing to redeploy police away from higher priority work.

These impediments, however, are not enough to stop Trump. The Trump administration may still be able to secure the passive support of local police departments. How exactly? By expanding upon existing Obama-administration programs that offer millions of dollars in grants to local police forces, in large and small cities alike, to purchase surveillance technologies.

To accomplish this, the Trump administration would engage in a little quid pro quo: federal grants would pay for the local police’s surveillance technology in exchange for the information it collects. Such a deal might even include the feds receiving real-time access to video and audio feeds. This means if your local police force uses a Trump-surveillance grant to purchase a Stingray cell-site simulator, when that device captures location data from thousands of cell phones, the Trump administration may be able to use that data to locate immigrants or Muslims. Or if your city uses the grant money to purchase and install surveillance-enabled lightbulbs — which look just like regular streetlight bulbs but have tiny cameras and microphones hidden inside them — President Trump’s federal agencies may be able to access their live and recorded video and audio feeds and use them to spy on communities of color and neighborhoods with high Muslim or foreign-born populations.

Make no mistake about it, privacy considerations will not constrain the Trump administration’s use of these local surveillance technologies and their data should they receive access to them. As the Trump administration has already made clear, privacy protections are not to be extended to groups that find themselves in the president’s cross-hairs. As proof, one need look no further than Section 14 of President Trump’s January 25 executive order, which declared that, “Agencies shall, to the extent consistent with applicable law, ensure that their privacy policies exclude persons who are not United States citizens or lawful permanent residents from the protections of the Privacy Act regarding personally identifiable information.” If you don’t find much solace in the phrase “to the extent consistent with applicable law,” I don’t either: when a president’s party is in control of both houses of Congress, the longevity of unfavorable laws and regulations is not something to be relied upon.

Right now, local police forces almost uniformly have the unchecked ability to decide, in secret, when and under what terms they acquire and use surveillance technologies. Because local police have a hard time turning down offers to buy them free equipment, they are likely to continue to pursue these federal grants, even if they contain surveillance data sharing requirements. The only way to prevent the police from accepting these offers is to change the law.

That is what the Community Control Over Police Surveillance (CCOPS) effort is all about.

Instead of allowing local police to secretly and unilaterally approve the acquisition and use of surveillance technologies, CCOPS bills mandate that approvals, if given at all, must be made publicly by city councils and incorporate significant public input. CCOPS bills also empower city councils to reexamine and stop local police departments from broadly sharing surveillance data with fusion centers, where other law enforcement agencies, including those from the federal government, have access to the collective data. And under CCOPS, the city council, with input from the communities they represent, would be able to decide what surveillance data, if any, is shared with the federal government.

In short, CCOPS legislation, wherever it is adopted, would undermine the Trump administration’s ability to secretly use local police surveillance technologies to spy on the public. And here is some good news for a change: Because efforts to secure CCOPS laws take place on the city council level, they not only provide an excellent opportunity to resist President Trump’s agenda, they also allow us to fight in a forum where we have an excellent chance to win: America’s cities.

The effort to secure CCOPS legislation did not start with the election of Donald Trump. In fact, many individuals and organizations who support CCOPS are doing so for reasons that have nothing to do with him. That is why 15 geographically and politically diverse cities have already identified sponsors for CCOPS legislation, and efforts to recruit sponsors are underway in two dozen other cities. But President Trump’s presence looms large, and because of that, the ACLU expects the number of participating cities will continue to grow as elected officials learn more about the CCOPS campaign and the public outcry for CCOPS laws continues to grow louder. That is why we need your help.

Perhaps you are one of the millions of Americans who are looking for a way to fight back and impede President Trump’s efforts to implement his agenda. Perhaps you are looking not just to fight, but to win, and to win right now. Perhaps you want to do more than express your outrage — you want to take an active role in fighting for a cause that is fair, good, and just. If so, the CCOPS effort is a powerful way to do all these things. To join the fight, visit CommunityCTRL.com to learn more about the CCOPS effort. And when you are ready, pick up your phone or log on to your email and let your council member know you want a CCOPS law adopted in your city today!