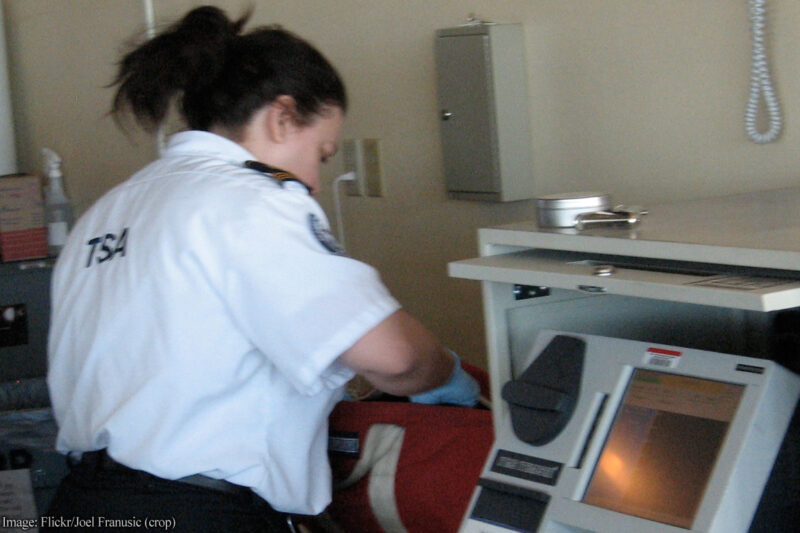 The TSA is testing new requirements that passengers remove books and other paper goods from their carry-on baggage when going through airline security. Given the sensitivity of our reading choices, this raises privacy concerns.

Tests of the policy are underway in some small airports around the country, and DHS Secretary John Kelly recently said that “we might, and likely will” apply the policy nationwide. “What we’re doing now is working out the tactics, techniques, and procedures, if you will, in a few airports, to find out exactly how to do that with the least amount of inconvenience to the traveler,” he told Fox News. The policy may also apply to food items.

The rationale for the policy change given by Kelly and the TSA is that the imposition of growing fees for checked baggage by the airlines has prompted passengers to more densely pack their carry-ons, and that this has made it harder for screeners to identify particular items amid the jumble of images appearing on their screens. Laptops must already be pulled out separately because they are regarded as a heightened threat and can be better examined if they are not scanned in a bag with many other objects. It is not clear to me whether books are also regarded as a special threat or whether they are hard for the TSA to distinguish from explosives. I do know from a tour I was given of the TSA’s testing facility a few years ago that the scanners highlight items that are especially dense, and items that are organic (since explosives are made of organic, i.e. carbon-based, matter). That’s probably why the agency thinks it would speed things along to pull out food and books.

That said, books raise very special privacy issues. As my colleague Nicole Ozer has discussed, there is a long history of special legal protection for the privacy of one’s reading habits in the United States, not only through numerous Supreme Court and other court decisions, but also through state laws that criminalize the violation of public library reading privacy or require a warrant to obtain book sales, rental, or lending records.

And we know that in the airline screening environment in particular, there have been multiple cases where passengers have been singled out because of their First Amendment-protected expressions. For example, in 2010 the ACLU sued on behalf of a man who was abusively interrogated, handcuffed, and detained for nearly five hours because he was carrying a set of Arabic-language flash cards and a book critical of U.S. foreign policy. We also know that the DHS database known as the “Automated Targeting System,” which tracks information on international travelers, has included notations in travelers’ permanent files about controversial books in their possession.

A person who is reading a book entitled “Overcoming Sexual Abuse” or “Overcoming Sexual Dysfunction” is not likely to want to plop that volume down on the conveyor belt for all to see. Even someone reading a bestseller like “50 Shades of Grey” or a mild self-help book with a title such as “What Should I Do With My Life?” might be shy about exposing his or her reading habits. And of course someone reading Arab or Muslim literature in today’s environment has all too much cause to worry about discrimination. To at least one woman who experienced the new policy, “The scrutiny of my books, magazines and food feels even more invasive” than the body scanners, swabs, and pat-downs.

Of course, it is true that TSA agents have long had the authority to search your bag if they see an anomaly or unidentifiable object in the x-ray, and such a search would include seeing any reading materials therein. The fact is, exposure of reading materials is part of the privacy that is lost when we allow bag searches. But this policy would lead to more routine and systematic exposure and, inevitably, greater scrutiny of passengers’ reading materials in the course of the screening process. (To be clear we’re talking strictly about physical reading materials here; there is no justification for a TSA screener to look through an e-book reader or other data-storage device. Users of e-books face different privacy concerns.)

While the TSA does have the authority to search our bags, it does NOT have the authority to do so for any purpose other than protecting the safety of airline transportation. That is why TSA agents swabbing your hands for explosives can’t also swab for drugs, for example, or detain and interrogate you about large amounts of cash you are carrying. TSA checkpoints are not general law enforcement stops.

So what is the threat to aviation that might justify an agent taking a book out of your bag and flipping through the pages? I can imagine the agency might want to check to ensure a traveler’s book has not been carved out to hold explosives or other weapons. I presume that such hidden materials would be detected by an x-ray machine, but where anomalies appear screeners might want to open a book to double check.

The second justification is to search for something called “sheet explosives,” which are apparently thin, flat explosives that can be hidden within sheafs of paper or photographs. In a case decided by the 9th Circuit in 2011, a man was arrested after TSA screeners found child pornography in his checked baggage, and while a district court ruled that the agency’s search of a stack of the man’s photographs was invalid, the 9th Circuit reversed, in the process accepting as justification the need to check for sheet explosives.

If the TSA is to begin implementing this practice, I would make two recommendations for them.

First, the agency and its screeners need to be sensitive to the potential privacy concerns at work here. That means training screeners to be aware of the privacy issues around books and papers, along with orders curbing any agents’ temptations to snoop through, draw attention to, comment on, or discriminate upon any books and papers they incidentally observe in the screening process. The agency should also think carefully about protocols where passengers may want privacy for their reading materials, such as giving passengers the choice to have their papers searched in private.

Second, given any rule or practice requiring the unpacking and separation of books and other papers, the TSA should allow those materials to be contained by themselves within another package. Passengers who want to should be able to shield paper materials’ covers and nature (such as whether the paper is a book, a diary, a bundle of magazines, a stack of photographs, an eccentric pile of papers with handwritten scribblings, or whatever else). All kinds of things could serve that purpose, from a brown paper bag to manila folder. We could even see the emergence of a product category of “book sleeves” or the like—compartmentalized bags that allow for things to be separated for the x-ray without visually exposing them to anyone. Since plain containers will accomplish the TSA’s stated goal of decluttering the x-ray images reviewed by agents, there is absolutely no reason the TSA should not accommodate passengers seeking privacy this way.

I would think same kind of logic would apply to food. I don’t see comparable privacy/discrimination threats with regards to making passengers show their food, though some people may have their reasons for not wanting others to see what they’re eating/carrying.

Of course if there is an anomaly on an x-ray of a sleeve holding books, the TSA is going to want to open such a package or sleeve to make sure there is nothing that poses a threat to aviation therein, just as with a backpack or any other carry-on item.

In this country we use x-rays instead of manual bag searches not just because they are faster and easier, but also because it helps to minimize the intrusiveness of searches. Despite the privacy invasion that such searches represent, we do preserve a fair degree of practical privacy when we are allowed to keep our bags closed as we submit them to the x-rays. Insofar as the agency is going to force passengers to unpack when being screened, it should be done in such a way as to minimize the invasiveness of that change.

Anyone who experiences discrimination based on their books or papers or invasions of their privacy that are not justified (per the criteria explained above) should consider filing a complaint with the DHS Office of Civil Rights and/or the TSA, and notifying the ACLU via this form.

Update (6/30/17):
The TSA has been contacting news outlets and saying that, as they told the New York Times, “At no time has the removal of books been T.S.A. policy, nor are we considering making it policy.” This is good news.

The TSA has characterized suggestions to the contrary as “rumors”—the New York Times called them “buzz on social media”—which seems to underplay the seriousness with which the policy was considered. As can be found in my links above, the Wall Street Journal did report on May 25 that one test of the book-removal policy in Kansas City was terminated, though it did not say the policy itself was being entirely abandoned—and there were separate reports of it being enforced in Sacramento after publication of that WSJ story. In addition, on May 28 DHS Secretary John Kelly seemed to confirm these reports on Fox News Sunday [emphasis added]:

Chris Wallace: The TSA is testing tighter screening of carry-ons, and the idea that people who bring carry-ons are going to have to unpack them, and put food on one bin, and electronics in another bin, and paper in another bin. Are you going to spread that nationwide, and what’s that going to do to the screening lines?

John Kelly: The reason we’ve done that is [explanation about overstuffed carry-on bags].

Chris Wallace: Are you going to do that nationwide?

Nobody ever claimed this had become TSA policy, but the agency was clearly considering it—and if reports of that consideration were a “rumor,” they were a pretty well-founded one. But based on what they’re saying now it seems the TSA is not planning on pursuing this policy and that’s good news!