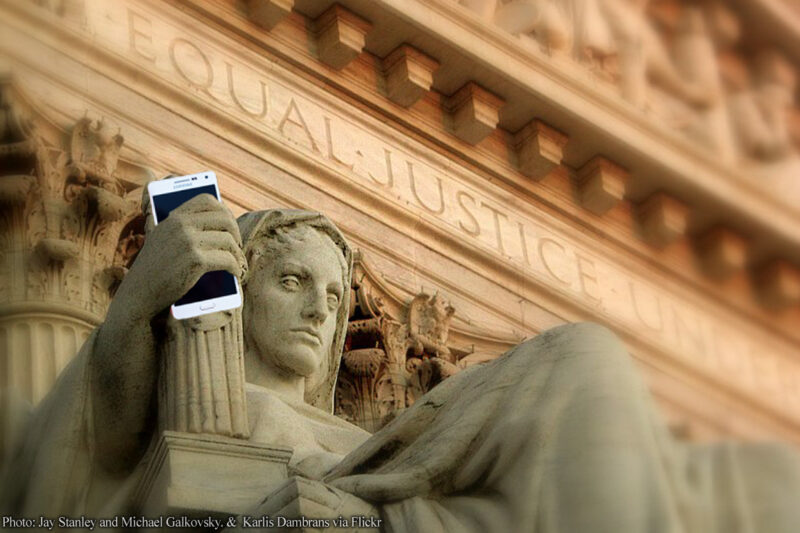 Late on Friday, the ACLU and ACLU of Wisconsin joined the Electronic Frontier Foundation in filing an amicus brief in a Seventh Circuit case involving real-time cell phone location tracking by police. In the case, the Milwaukee Police Department disclosed that they asked the suspect’s cellular service provider to track the phone using its network equipment. Our brief explains why a probable cause warrant should be required for this kind of location tracking.

As we read through documentation from the case, however, we began to suspect that something else was going on. It appears that police secretly used a cell site simulator, also known as a Stingray, to track the phone, but successfully concealed that fact from the defense and the court.

Our suspicion was first raised because police initially did not disclose to the defendant that they had located him by tracking his phone, only revealing it at an evidentiary hearing. In reports prepared after the defendant’s arrest, police officers used oddly vague language to explain how they located him: one officer merely wrote that law enforcement had “obtained information” about the defendant’s location; another said that police “obtained information from an unknown source” about where he was. This sounded to us a lot like the kind of intentionally ambigous language used by police across the country to hide their Stingray use. Indeed, Milwaukee Police have signed a non-disclosure agreement with the FBI promising to keep information about their use of Stingrays secret.

And then we found the smoking gun. Last fall, privacy activist Mike Katz-Lacabe obtained a list of 579 investigations in which the Milwaukee Police Department used Stingrays. (Here are Mike’s public records request and MPD’s response letter). That previously unpublicized list includes an entry for a case that matches the date and description of this one: an October 28, 2013, apprehension of a “fugitive” “related to [an] FBI roundup.”

As our brief argues, “If the government did, in fact, use a Stingray in this case and failed both to disclose this fact to the judge who issued the pen/trap order and to the Defendant, this would be sufficient grounds for suppressing the evidence gathered as a result of using the device.”

The importance of the court closely scrutinizing this issue is underlined by the fact that this is apparently not the first time a case has reached the Seventh Circuit in which police used a Stingray, but never informed judges. In a law review article, Stephanie Pell and the ACLU’s Chris Soghoian noted that in 2013, the Department of Justice indicated in a FOIA response that a 2007 case in the Seventh Circuit had involved a Stingray. It appears from the opinion in that case, however, that the court was ignorant of that fact.

Evidence of police hiding their Stingray use from defense attorneys, judges, and the public is widespread. It was recently revealed that in Sacramento, for example, police “never told judges or prosecutors that they were using the so-called ‘cell site simulators’ – nor did they specifically ask for permission to use one.” In Tacoma, Washington, local judges raised concerns when they learned that they had been unwittingly signing orders used to justify Stingray use without police ever explaining what was at stake. In Baltimore, thousands of Stingray uses were concealed behind “vague terms” and omissions. The pattern has repeated in city after city across the country.

But rarely have we obtained such direct evidence of Stingrays being hidden from the courts in particular cases—especially in a case that has gone as high as the 7th Circuit Court of Appeals.

If courts are ever to explain how the Fourth Amendment applies to invasive surveillance technologies like Stingrays, the government must candidly describe its use of the devices and their capabilities. This kind of intentional obfuscation must end.

UPDATE (4/6/16):
In a letter sent to the defendant’s attorney in this case, the U.S. Attorney’s office has now acknowledged that “on October 28, 2013, the Milwaukee Police Department used a cell site simulator to locate Damian Patrick.” The government should have disclosed this to the defense and the original judge in the case more than two years ago. That the government only made the disclosure after the ACLU and Electronic Frontier Foundation uncovered the Stingray use in an amicus brief is yet more evidence of the corrosive regime of secrecy that has undermined courts’ ability to keep government surveillance in check. As a Maryland appeals court wrote last week, this secrecy is “inimical to the constitutional principles we revere.”

UPDATE (5/25/16):
Audio from the Seventh Circuit’s oral argument is available here. During argument, Chief Judge Diane Wood pressed the attorney for the government about the government’s secrecy and lack of disclosure, noting that the government “completely concealed” information about its Stingray use, and that “there’s a huge lack of candor on the government’s part that is very troubling.”