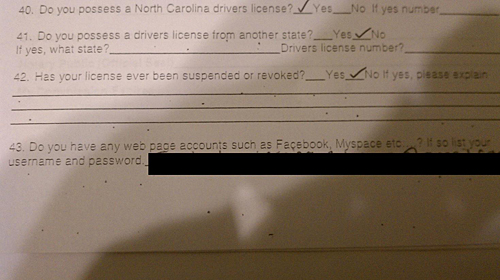 We don’t think employers should be asking prospective employees to provide their private information and communications just to get a job. And as the friend of a user, you shouldn’t have to worry that your private information or communications will be revealed to someone you don’t know and didn’t intend to share with just because that user is looking for a job. That’s why we’ve made it a violation of Facebook’s Statement of Rights and Responsibilities to share or solicit a Facebook password.

We’re glad that Facebook is taking this seriously — and we believe that it’s time for Congress to pay attention too.

Congress should pass legislation prohibiting any employer or school from accessing your private social networking information. It’s an egregious privacy violation, comparable to poking around in your house or reading your personal email. In a time when we share so much through new technology, we need clear rules to makes sure that we can keep control of our own information. One of them should be that a password means “stay out” — whether you’re an employer, a school or the government. And end-runs around password protection, like asking an employee to login so someone can take a look, are also unacceptable.

Take action now to let your members of Congress know that you want them to pass a bill that would protect your private social networking information!

If there’s any doubt that we need legislation, consider a few more cases that have come to light recently: The Richmond Times-Dispatch reports that as of January 1, 2012, “Anyone seeking to become a Virginia state trooper must make available the contents of his or her social media accounts — including private profiles — as part of the department’s extensive background-screening process.” The article goes on to explain that though applicants are not required to provide usernames or passwords, they must provide a listing of any social media account that they are on (including Facebook, Twitter and Flickr), and that during the interview process a background investigator will review the contents of the pages with the applicant.

On the blog Tecca.com, there’s a photo (pictured above) said to be of an application form for a clerical position at a North Carolina police department — it includes the line, “Do you have any web page accounts such as Facebook, Myspace, etc…? If so list your username and password.”

And unfortunately, it seems this problem is broader than just employers. MSNBC.com has reported that “Student-athletes in colleges around the country also are finding out they can no longer maintain privacy in Facebook communications because schools are requiring them to ‘friend’ a coach or compliance officer, giving that person access to their ‘friends-only’ posts.”

Earlier this month, the ACLU of Minnesota filed a lawsuit after a public school student was forced to turn over login information for her Facebook and email accounts because of allegations that she had online conversations about sex with another student off-campus. Two sheriff’s deputies and two school officials were present at the search, which was conducted without a warrant and without the consent of the student’s parents.

Whether at work or at school, we shouldn’t have to choose between technology and privacy, and no one should be coerced into sharing their private information against their will.

Thankfully, change may be coming soon. Yesterday we told you that Sen. Richard Blumenthal (D-Conn.) announced that he is writing a bill to outlaw the practice.