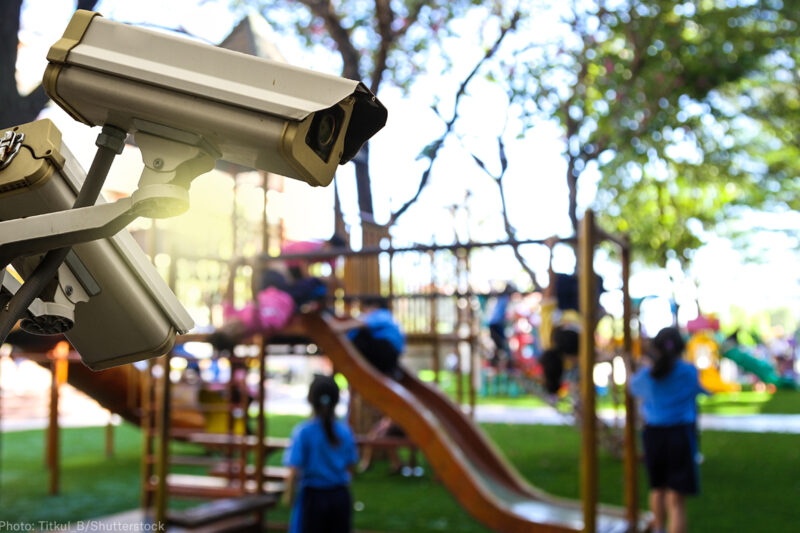 Next year, students as young as 4 or 5 years old who attend public school in Western New York’s Lockport School District could be subject to surveillance from facial recognition technology.

News reports indicate the district plans to have the invasive and error-prone technology installed by next school year. Earlier this week, the New York Civil Liberties Union sent a letter to the New York State Education Department urging it to consider students and teachers’ privacy in reviewing the use of surveillance technology by school districts. We also sent a freedom of information request to the district seeking details on how and where the technology will be used as well as who will have access to the sensitive data that gets collected.

Lockport spent almost $4 million to acquire the facial recognition system, using state money allocated for schools meant to upgrade or improve their infrastructure and technology. Most schools spent the money on things like Wi-Fi, new computers, or 3D printers.

Lockport, however, made the multimillion-dollar purchase despite the fact that the district could face a budget shortfall of nearly $1 million. The district has said if it doesn’t receive additional state aid, it plans to cut transportation and sports programs, reduce kindergarten to half days, and close elementary school libraries.

Beyond the incredible expense, these kinds of surveillance systems also pose serious privacy and safety risks for everyone at Lockport schools, especially children. In the system Lockport purchased, once a person’s facial image is captured by the technology and uploaded, the system can go back and track that person’s movements around the school over the previous 60 days.

It’s easy to imagine that students will feel like they are constantly under suspicion. Lockport is sending the message that it views students as unpredictable, potential criminals who must have their faces scanned wherever they go.

This has the potential to turn every step a student takes into evidence of a crime. Youthful misbehavior or simply hanging out with friends could be criminalized. Worse, students seeking confidential assistance from a counselor or school clinic will be caught in the system’s dragnet.

Lockport apparently plans to implement facial recognition into all its public schools, which means students as young as 4 or 5 could have their movements tracked and their faces uploaded into the district’s database.

We’re also concerned about who has access to that database. It’s unclear who from the district, the for-profit software vendor, the police department, or each individual school will have access. It’s also unclear whether federal or state agencies will have access to the database, too, but Lockport indicated in its proposal that it wanted funds for “interfaces to local state and federal crime databases.”

These databases could include those used for immigration enforcement. That could make parents of immigrant students afraid to send their children to school for fear that they or their children could end up on ICE’s radar. Our freedom of information request is designed, in part, to get to the bottom of these important questions. All students in New York State have a right to an education regardless of immigration status, but that right is put in danger if families are scared to go to school.

Facial recognition is also notoriously inaccurate, especially when it comes to identifying women, young people, and people of color. This means that innocent students are likely to be misidentified and punished for things they didn’t do.

As troubling as Lockport’s facial recognition system is, what is perhaps even more worrying is the fear that other districts will follow the district’s lead. Deputy Superintendent Jeffrey Rabey told the Buffalo News that his district is seeking state funding for the same facial recognition system that Lockport is installing. Even more troubling is that Rabey told the News he’d like to use the technology to track students who commit “some type of offense against the code of conduct.” That means this dangerous technology could be utilized to enforce minor infractions like dress code violations.

The state Education Department must not allow this to happen. The department, and its chief privacy officer, must revisit Lockport’s application requesting state funds for the technology and should make it clear that this technology does not belong in schools. Going forward, all applications for surveillance technology by schools must be reviewed by the Education Department’s chief privacy officer, and parents, teachers, and students must be given adequate opportunity to weigh in.

Students should think of schools as a safe place to learn. They should not worry that their every move is being monitored or that their pictures could end up in a law or immigration enforcement database simply because they came to class. Big Brother should have no seat in New York public schools.