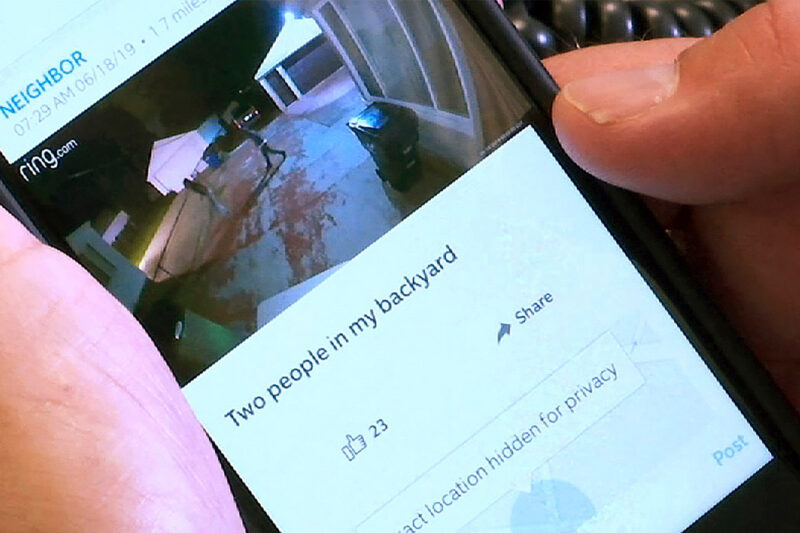 Around the country, local police are teaming up with Amazon and its subsidiary Ring to push people to install doorbell cameras outside their residences, leveraging this technology into a new kind of surveillance network. What should we think about this trend, both as consumers who might be contemplating a doorbell camera purchase and as human beings who don’t want to live in a Big Brother world?

First of all, it’s spooky and disconcerting to see one of our largest and most prominent companies teaming up with law enforcement to push surveillance technology on American communities. Recent reporting has revealed that Amazon helps police departments give free or discounted Ring cameras to residents, gives police a portal for requesting video and special access to their social app “Neighbors” (which helps neighbors share video clips), and coaches police departments on how to get users to agree to turn over the footage. In turn, some police departments have agreed to promote Ring cameras and the Neighbors app and, according to a document obtained by Gizmodo, even to give the company the right to approve or censor what police departments say about Ring. Amazon has contracts with over 400 police departments around the country. (Ring has released a map of those departments.)

Police officers are public servants — and not just any public servants but ones entrusted with enormous powers including, in certain situations, the power to ruin people by invading their privacy. Allowing officers to serve as a de facto sales force for a company selling surveillance devices is a betrayal of police departments’ duty to serve the public first. It is also a betrayal to allow that company to shape how departments communicate with the public about their technology programs.

Crime rates today are at historic lows. As the Brennan Center puts it, Americans are “safer than they have been at almost any time in the past 25 years.” Yet Ring has used fear-mongering advertising and information campaigns to drum up sales. As USA Today points out, “Amazon’s promotional videos show people lurking around homes, and the company recently posted a job opening for a managing news editor to ‘deliver breaking crime news alerts to our neighbors.’” Amazon also asks police departments to give the company special real-time access to emergency dispatch (911) data so that it can pump out these crime alerts all the more efficiently, giving people an exaggerated sense of crime in their community. (This is also another example of a weirdly close interconnection between police and this giant company.) The result is that, as the Washington Post puts it, the “Neighbors feed operates like an endless stream of local suspicion.”

Let’s be clear: individuals have a First Amendment right to take photographs of things that are plainly visible in public places, including government facilities, infrastructure, and police officers in public (all of which rights we at the ACLU have defended in court after individuals were illegally arrested). They certainly have a right to photograph their property in front of their front door.

All that said, more pervasive private cameras do erode our privacy, and it is dismaying to see two powerful institutions in American life (Amazon and law enforcement) so actively and concertedly pursuing their mutual interest in saturating American communities with surveillance cameras.

Centralizing video in the cloud

When they first began to proliferate, we pointed out that distributed private surveillance cameras are better than centralized government surveillance networks for privacy and civil liberties. Distributed and isolated private cameras, we reasoned, deprive the government of suspicionless mass access to footage and the ability to do mass face recognition, wide-area tracking, and other analytics on that footage. They also place a middleman between the government and surveillance recordings, not only requiring police to go through a process to access particular footage, but also make it possible that, if the police try to request footage for abusive or unclear purposes, at least some owners may decide not to comply. (If the police have probable cause to believe that a camera contains evidence of a crime and the owner refuses to turn it over, they can go to a judge and get a warrant.)

However, the rise of cloud-connected cameras threatens to reverse the advantages of decentralized surveillance by re-centralizing the video collected across a community and removing the intermediary role that residents can play in checking surveillance abuses. Police officers have been quoted in press accounts as saying that when residents won’t agree to share video with the authorities, police can go to Ring and “just bypass them.” Amazon says that its policy is not to share video with police without user permission or a valid search warrant. But that’s Amazon’s policy according to Amazon, which leaves customers dependent on their policies and promises.

Unlike with video stored at home, a Ring customer never really can be sure with whom cloud-stored video is being shared. We know that Ring gave workers access to every Ring camera in the world together with customer details. Other companies offering similar services have also granted such access including Google, Microsoft, Apple, and Facebook.

Ring’s Neighbors App has also raised issues of racial profiling, for example when individuals use the social app to circulate video to their neighbors of people who they deem suspicious because of their race. (“There’s somebody in our neighborhood who doesn’t belong.”) That can have the effect of intensifying the effects of racism and raises the question of how and whether police account for that racism in how they interact with the platform.

Another problem is that many people are not going to feel like they can say no to law enforcement. A police “request” of a resident to voluntarily turn over video footage will never be entirely uncolored by coercion and will often come across as a demand. Ring’s email asking customers to share video, for example, sounds much more like a directive than a request. It includes “A message from Detective Smith” declaring, “This is a time-sensitive matter, so please review and share your Ring videos as soon as possible.” Besides, some police departments have, in return for camera giveaways, reportedly required recipients to agree to turn over any camera footage on request. (Amazon says it does not support such agreements, but it’s unclear how much say the company has on the matter.)

Localities should reject agreements between Ring and their police departments. And, at a minimum, residents should scrutinize those arrangements closely and ask hard questions about what kind of community they want to create, with how much surveillance, and how a Ring partnership will play into that vision. As always, we also recommend that communities enact a law requiring their police departments to be transparent about, and receive permission for, any police use of surveillance technology (which would include agreements with Ring).

Do you really want a doorbell camera?

Should you buy a doorbell camera? This is an individual decision and no doubt it can be a handy device for some people. But if you’re thinking about installing one, you should go in with your eyes wide open — especially if you’re considering a camera that is connected to the Internet.

Surveillance is always a matter of power. Generally speaking, it increases the power of those doing the surveillance at the cost of those who are subject to it. People buy cameras because they want to empower themselves by seeing who is at their door — a legitimate aim. But as with all power, consumers should use the power of surveillance responsibly — and beware that the tool doesn’t get turned on them and end up empowering somebody else.