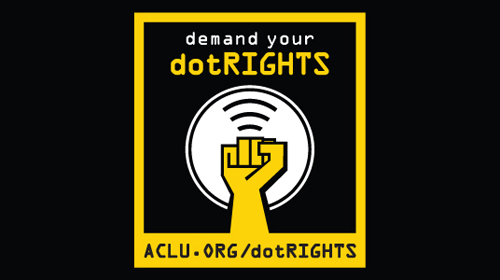 Earlier this week, we told you about some employers asking job applicants for their Facebook usernames and passwords. The ACLU believes that this is a gross violation of personal privacy because people are entitled to their private lives online just as they are offline.

Good news! After the objections raised by the ACLU and others about this issue, Sen. Richard Blumenthal (D-Conn.) announced that he is writing a federal bill to outlaw the practice, which will be ready “in the very near future.” The senator said, “I am very deeply troubled by the practices that seem to be spreading voraciously around the country.”

We tweeted at Sen. Blumenthal to thank him for his commitment to our digital privacy! Please retweet if you agree that we shouldn’t have to choose between privacy and technology, especially on the job! (And if you aren’t already, follow the ACLU’s Demand Your dotRights campaign on Twitter and Facebook to stay informed.)

The ACLU of Maryland first brought attention to this problem last year when Robert Collins was asked to provide his Facebook username and password during a reinstatement interview with the Maryland Department of Public Safety and Correctional Services.

Yesterday Collins’ told his story on NPR’s All Things Considered:

I was shocked. I was mortified when they asked me for my username and password. So, he asked me for the username and password and then he began to log onto the account. So, as he continued to do what he did, I was asking him what he was looking for and what he was doing. Well, he said he was going through my messages, my wall, and my friends list and my pictures to make sure that I was not gang-affiliated. But I felt violated, I felt disrespected, I felt that my privacy was invaded. But not only my privacy, the privacy of my friends and that of my family that didn’t ask for that (emphasis added).

We couldn’t agree more. As soon as his job interview at the Department of Corrections ended, Collins contacted the ACLU of Maryland (on his way to the car, in fact!) and soon after, Legal Director Deborah Jeon wrote a letter to the department, saying:

…we believe the DOC policy constitutes a frightening and illegal invasion of privacy for DOC applicants and employees — as well those who communicate with them electronically via social media. Neither Officer Collins nor his Facebook “friends” deserve to have the government snooping about their private electronic communications. …For social media users who maintain private accounts, the DOC demand for login information is equivalent to demands that they produce all of their private correspondence and photographs for review, or permit the government to listen in on their personal telephone calls, as a condition of employment. Such demands would be unconscionable, and there is no basis for treating electronic communications differently. While employers may permissibly incorporate some limited review of public internet postings into their background investigation procedures, review of password-protected materials overrides the privacy protections users have erected and thus violates their reasonable expectations of privacy in these communications. Accordingly, we ask that you direct the Department immediately to cease this practice.

A few months later, the department reconsidered its policy, and instead began asking applicants to “voluntarily” provide access to their accounts during interviews. The ACLU of Maryland is fighting for a social media privacy bill in the state (read Collins’ testimony in support of that bill here). And hopefully there will soon be a bill for lawmakers in Washington to consider as well.