Treat Ebola as a Public Health Issue, Not a National Security Matter 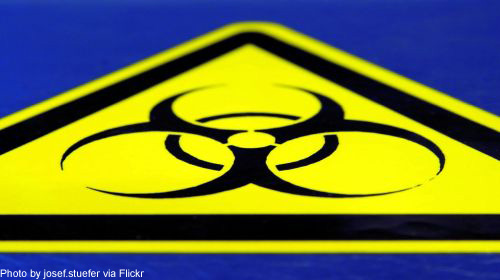 Since the government announced the introduction of new Ebola screening measures at border checkpoints at five U.S. airports, we’ve been getting queries asking what our position is on such measures from a civil liberties standpoint.

This is something we’re watching closely; in 2008, we commissioned a report by several leading public health experts on pandemic preparedness and have tried to think carefully about the issues involved. The government rightly has extensive powers to deal with contagious diseases, and in some cases those powers can trump individual rights. In the context of contagion, after all, the population represents a single bio-mass, and the concept of “the individual” breaks down to a certain extent. At the same time, as Americans we of course want to preserve individual freedom and rights as far as possible, and not give the authorities powers that are not needed.

When something new and frightening like Ebola rears its head, some are likely to panic. Let’s recall the “Swine Flu” scare of 2009, which sparked calls for closure of the U.S.-Mexican border at a cost of billions of dollars in lost economic activity, over what turned out to be a normal strain of seasonal flu virus. The more dangerous an actual outbreak, the more important it is that cooler heads prevail and the policies that are implemented be ones that will actually be effective from a public health standpoint, while not intruding any more than necessary on civil liberties (or economic life for that matter).

Most important, as our 2008 report emphasized, pandemics must be treated foremost as public health problems, not as law enforcement or national security matters. Victims of disease must be treated as human beings who need help, not enemies. Long experience has taught the public health community that treating people like enemies is counterproductive, because it drives them underground, encourages them to scatter, and makes them avoid seeking diagnosis and treatment. Such responses to disease can and have made things worse. Our 2008 paper cited several historical examples of such responses, and similarly in the current crisis the public health expert community strongly (and correctly) warned that the military quarantines and lockdowns attempted in Sierra Leone would be ineffective and counterproductive.

People want good medical care and will seek help if treated well. As experts realize, the situations in which force is required against the sick are actually quite rare — but they seem to occupy an outsized place in the imagination, especially of those brimming with bluster and panic.

The appropriateness of different health measures depends on the circumstances, including the nature of the outbreak and of the disease at hand. It’s a question of reasonable balance. We don’t see anything wrong in principle with the screening measures that have been put in place, which include questionnaires and non-contact temperature screening. The government already has considerable (though not unlimited) search and detention powers at the nation’s borders, and considerable powers to address epidemics.

That said, it is slightly disturbing that the new screening measures seemed to have been implemented not because public health authorities called for them as a needed step, but because politicians felt the need to be seen doing something (recalling the satirical syllogism, “Something needs to be done. This is something. Therefore, this needs to be done”). Public health officials initially resisted these measures, worrying that they would not be a good use of scarce resources, and public health experts have continued to question the effectiveness of the measures.

The fact that political panic trumped the apparent recommendations of public health experts may not have serious consequences for civil liberties when it comes to temperature checks at the airport, but that dynamic is an ominous indicator of what might happen if things were to get worse, either with respect to Ebola or in the case of another outbreak.

Diseases have been with humanity for its entire history, and the modern public health profession has learned a lot of lessons about what works and what does not. Panicky, fire-breathing politicians seeking to prove their “toughness” by calling for draconian and counterproductive measures are not what we need.

In announcing the new measures, CDC Director Tom Frieden did make the point that “nothing we can do will get us to absolute zero risk until we end the Ebola epidemic in West Africa.” It is commendable that Frieden is using his leadership role to encourage Americans to have a grown-up, realistic understanding that risk can never entirely be eliminated — something all-too-often missing in public discourse.