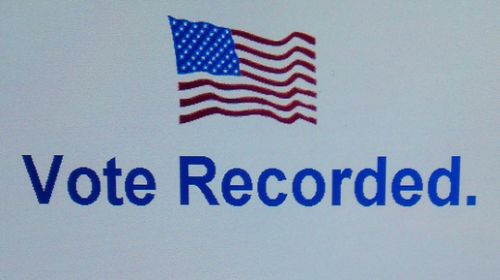 As America heads to the polls to elect the next president, stories are circulating about, and a lawsuit has been filed over, a last-minute software patch apparently being installed on voting tabulation machines in Ohio, as described in a secret contract between Ohio’s Republican secretary of state and the nation’s largest electronic voting machine manufacturer. (See this roundup and analysis of the story by Brad Friedman at Salon, which links to other key coverage of the story.)

The lawsuit is being filed by the Ohio Green Party candidate Robert Fitrakis, who first reported the story on the Ohio-based progressive news outlet The Free Press (not to be confused with the DC-based media reform organization Free Press). According to Fitrakis’s attorney, the “uncertified, suspect software” modifications are “a flagrant violation of the law. Before you add new software, you need approval of a state board.”

In Salon, Brad Friedman does not pull any punches in describing what appears suspicious but is appropriately journalistically cautious about drawing any conclusions; he emphatically states that he is not “charging that there is a conspiracy to rig or steal the Ohio election.” He writes, “I’d like to have been able to learn much more before running anything on this at all, frankly. But the lack of time between now and Tuesday’s election… precludes that.”

Nor do I know the truth of this matter but the very fact that these questions are arising is deeply unsettling. Everybody should be clear about one thing when it comes to electronic voting machines:

Proof of fraud is not required for scandal; lack of proof that fraud is impossible is scandal enough.

I have mentioned before my belief that when it comes to crucial public functions such as automobile safety, open source code ought to be mandatory. That applies a hundredfold when it comes to electronic voting machines. At a minimum, any party must be able to openly view and inspect the voting process—including the source code for all electronic devices involved in voting and tabulation. (That is in addition to all the other safeguards that we need, such as a means for reliable and independent recounts.)

Anything short of this is a recipe for an ugly sinkhole of suspicion, doubt, and recrimination. If Ohio becomes a recount debacle in today’s election, or if voting results vary surprisingly from exit poll results, this story could become a powder keg.

It’s worth remembering that in thousands of years of perpetual violence over “who shall rule,” the only way we humans have figured out how to live peacefully through political transitions is through procedure. We ensure peace not by eradicating raw ambition from human hearts or settling deep differences in political beliefs, but through a meta-agreement in which we agree how to decide, and agree to accept the results. That is an amazing thing, so anything that undermines that bedrock procedural legitimacy in any way is deeply unsettling.