Warrantless Pole-Camera Surveillance by Police is Dangerous. The Supreme Court Can Stop It. 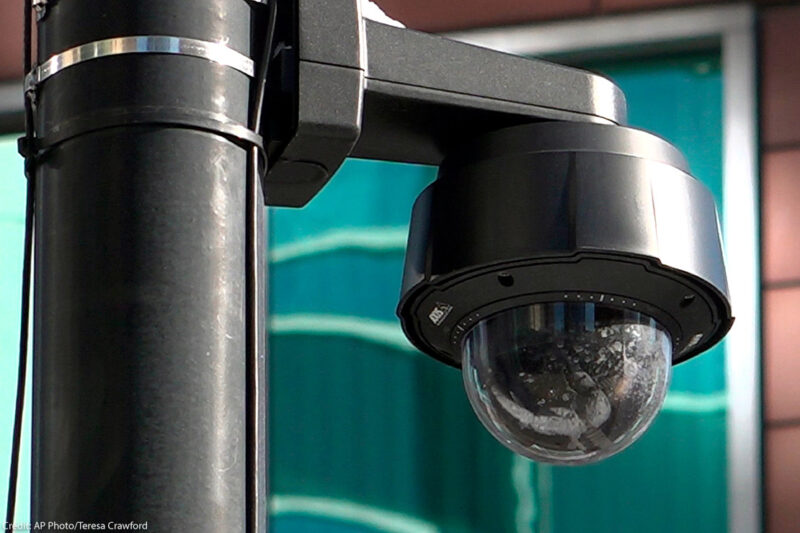 We’re calling on the court to clarify that long-term police use of a surveillance camera targeted at a person’s home is a Fourth Amendment search.

Every fan of old crime novels or cop movies is familiar with the classic police “stakeout”: round-the-clock surveillance by police hiding in a car or camped out in an apartment across the street, watching a suspect’s home. In both fact and fiction, stakeouts don’t last long — even with rotating shifts, police get tired; the costs pile up, and after a while, people start to notice that they’re being watched.

In 2022, though, technology allows police to avoid these practical limitations, conducting surveillance for months on end using small, hidden digital cameras that can be panned and zoomed from afar and that transmit video back to police to be stored indefinitely and reviewed at law enforcement’s leisure. Law enforcement agencies around the country maintain they can engage in this practice for as long as they’d like without even a modicum of concrete suspicion, and never have to obtain warrants before using a hidden surveillance camera to watch a person’s home. These technological “stakeouts” of homes can go on for months on end. They make a record of every time someone leaves their house or has a guest over, and monitor every activity in their yard, driveway, or doorstep.

This is a profound threat to privacy, and is exactly what happened to our client, Daphne Moore, and her family in Massachusetts.

So last week, the ACLU and ACLU of Massachusetts, along with the law firms of Elkins, Auer, Rudof & Schiff and Thompson & Thompson PC, filed a petition on behalf of Ms. Moore urging the U.S. Supreme Court to make clear that under the Fourth Amendment, police should be required to get a search warrant before engaging in such invasive surveillance.

Ms. Moore’s case clearly demonstrates the frightening extent of the government’s argument for unfettered discretion over the use of pole cameras. In 2017, while investigating Ms. Moore’s adult daughter, federal agents attached a small, hidden digital video camera high on a utility pole across the street from her home in Springfield, Massachusetts. On their own initiative, without getting a search warrant from a judge, agents operated the camera 24 hours a day for an uninterrupted eight-month period. The camera transmitted live video to police and could be remotely operated to zoom in and pan up, down, left, and right. Police also recorded the digital footage, creating a searchable record of Ms. Moore’s, and her family’s, patterns of life: when they left home and returned, who visited them and when, what they carried to and from the car on each trip, and more.

After eight months of continuous surveillance with the pole-mounted camera, agents arrested Ms. Moore’s daughter on drug charges. Nearly a year after that, they brought charges against our client — a lawyer, respected judicial clerk, devoted church member, and a grandmother raising her grandkids — as well. But after the government disclosed its pole-camera surveillance to the defense before trial, a federal district court judge ruled that operating the camera over a long period without a warrant violated the Fourth Amendment and ordered the pole camera footage to be excluded as evidence at any trial. The government immediately appealed, and the full en banc U.S. Court of Appeals for the First Circuit took up the case to clarify whether a warrant is required for long-term pole-camera surveillance of a home.

A full year after the oral argument, the court split evenly on the issue. Three judges wrote an opinion explaining why long-term pole-camera surveillance of a home violates people’s reasonable expectations of privacy under the Fourth Amendment. The other three judges disagreed, writing that because passersby could see our client’s driveway, yard, and front door, there could be no reasonable expectation of privacy against police using digital recording technology to make a complete record of everything that happened on her property over the course of eight months.

This divide mirrors a split among federal appeals courts and state supreme courts across the country. Three federal courts of appeals have concluded that police can use pole cameras to surveil homes without any constitutional limit. In contrast, the U.S. Court of Appeals for the Fifth Circuit, and the supreme courts of Colorado and South Dakota, have held that long-term pole-camera surveillance of a home is a Fourth Amendment search, for which a warrant is required. Massachusetts’ highest court has reached the same outcome under its state constitution. (The ACLU’s amicus briefs in the Colorado and Massachusetts cases are here and here).

Central to this case is the question of how to apply recent Supreme Court decisions on privacy in the digital age to this particular technology. In Carpenter v. United States, a 2018 case that the ACLU argued, the Supreme Court held that police need a warrant before requesting significant periods of a person’s historical cell phone location data from their cell phone company. In that case, the government argued that people lose Fourth Amendment protection in that data because they expose their location to their phone company by carrying a cell phone, and to other members of the public who might see us as we go about our days. The court rejected the government’s argument, explaining that data documenting a person’s location over time reveals extraordinarily private information, and a warrant is required to avoid police exploiting cell phone technology to amass a complete and near-perfect record of everywhere they’ve been.

Last week’s filing provides an opportunity for the Supreme Court to make clear that the rationale of the Carpenter decision applies to prolonged surveillance, via remote video cameras, of a person’s home. The small, cheap digital camera technology available today poses a similar threat to the location tracking the Supreme Court addressed in Carpenter, allowing police to covertly amass a complete record of our activities at the thresholds of our homes. Despite the magnitude of the privacy invasions in these cases, courts continue to struggle to apply the Supreme Court’s decision in Carpenter and other recent Fourth Amendment cases to pole-camera surveillance.

Only the Supreme Court can impose the strong, nationwide protections that Americans need and deserve. Moore v. United States provides the opportunity to do so — and clarify that police cannot deploy new and cheap technology to conduct constant stakeouts of Americans’ homes wherever and for however long they please.