Who Controls Our Genes? Congress Is Deciding Right Now and It Could Harm Our Health. 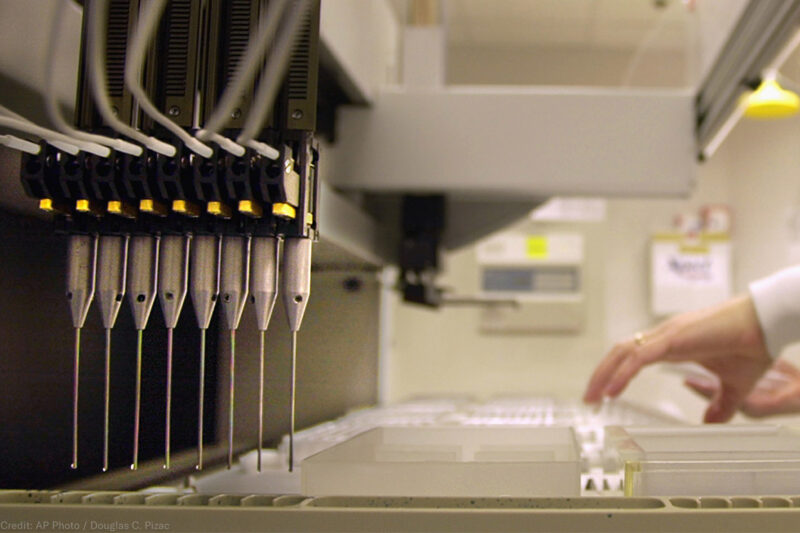 This morning the ACLU, along with 169 other civil rights, medical, scientific, patient advocacy, and women’s health organizations, including the Mayo Clinic, Breast Cancer Action, Lung Cancer Research Foundation, the Huntington’s Disease Society of America, the Women’s March, University of Washington, and many others sent a letter to the Senate Judiciary Committee’s Subcommittee on Intellectual Property strongly opposing a draft bill that would allow companies to patent our genes. Yes. You read that right.

The draft bill is deeply concerning because if it becomes law, it would allow private companies to hold patents granting them 20-year monopolies over genes, their links to disease, other products of nature and abstract ideas. Patent-holders could control who can provide testing for genetic mutations associated with diseases like cancer, muscular dystrophy, Alzheimer’s disease, heart disease, and other rare and common diseases, driving up prices for testing and jeopardizing patients. They could also control which researchers could examine and study the gene, stifling the free exchange of information and impeding the progress of developing treatments.

Beginning early this year, Senators Tillis and Coons, held closed-door roundtables with industry representatives and others interested in changing the law to discuss radically rewriting Section 101 of the Patent Act, which currently prohibits patents on laws of nature, products of nature, and abstract ideas. Now, the Senators, along with Reps. Johnson, Collins, and Stivers, have released the draft bill, which removes this prohibition and erases all related prior court precedent. Senators Tillis and Coons will be holding three hearings this month, starting tomorrow, calling 45 witnesses to discuss changes to Section 101. Disturbingly, of the 30 witnesses testifying so far, very few organizations will speak on behalf of patients (the ACLU will be one of the exceptions) and the broader scientific community.

Let’s back up a bit. Genes are fundamental to who we are. They can determine our hair color, our height, whether we have seasonal allergies. Mutations in them also are associated with disease. For example, mutations in the BRCA1 and BRCA2 genes are correlated with a 50-80% higher risk of breast cancer and a 20-50% higher risk of ovarian cancer, as well as elevated risks of pancreatic and prostate cancers. People with certain personal or family histories of cancer may wish to be tested so they can assess their options.

Now, consider this. What if only one lab can do the testing, because it has patented the genes?

This is not a made-up hypothetical. It was the reality for many people before the Supreme Court decided a 2013 case known as Association for Molecular Pathology v. Myriad Genetics. For decades, the U.S. Patent Office issued patents on thousands of human genes, arguing that the first to sequence a gene and remove it from the human cell somehow “invented” the DNA.

Because Myriad patented the BRCA1 and BRCA2 genes, it had the power to control who could test the genes and who could research them. Myriad used that power. It charged monopoly prices for its tests, and other labs were stopped from providing different and more comprehensive genetic testing. The ACLU sued Myriad Genetics on behalf of 20 plaintiffs, including patients, geneticists, and scientific associations, arguing that genes should never be granted to anyone as intellectual property. The Supreme Court agreed and unanimously held that human genes cannot be patented because they are “products of nature.”

The decision was not radical. It was grounded in over 150 years’ worth of precedent that teaches us that patents on laws of nature, naturally occurring phenomena, and abstract ideas are invalid, because they grant monopolies over the fundamental building blocks of human ingenuity. If things created in nature and broad ideas (like the concept of hedging risk) are not available for everyone to use, then the patentholder is empowered to stop all further innovation to the public detriment – as economist Joseph Stiglitz, one of the experts in our litigation, explained.

Patent law is not just about one company asserting property rights against another. Patents affect all of us, with real consequences for how we access medical care and the research that scientists pursue. Rewriting the law to allow for patents on nature will return us to an era where patents on genes increase the price of testing beyond patients’ reach, stymie competition for developing improved genetic analyses, and interfere with advancements in developing therapies targeted to genomic markers.

As we said in Myriad, we will say it again: products of nature, laws of nature, and abstract ideas should not be granted as intellectual property to anyone. Members of Congress should oppose this draft legislation and any effort to rewrite the law that would harm patient health care, access to diagnostics and treatment, or scientific research.