10 Emerging Artists Share What Systemic Equality Means to Them 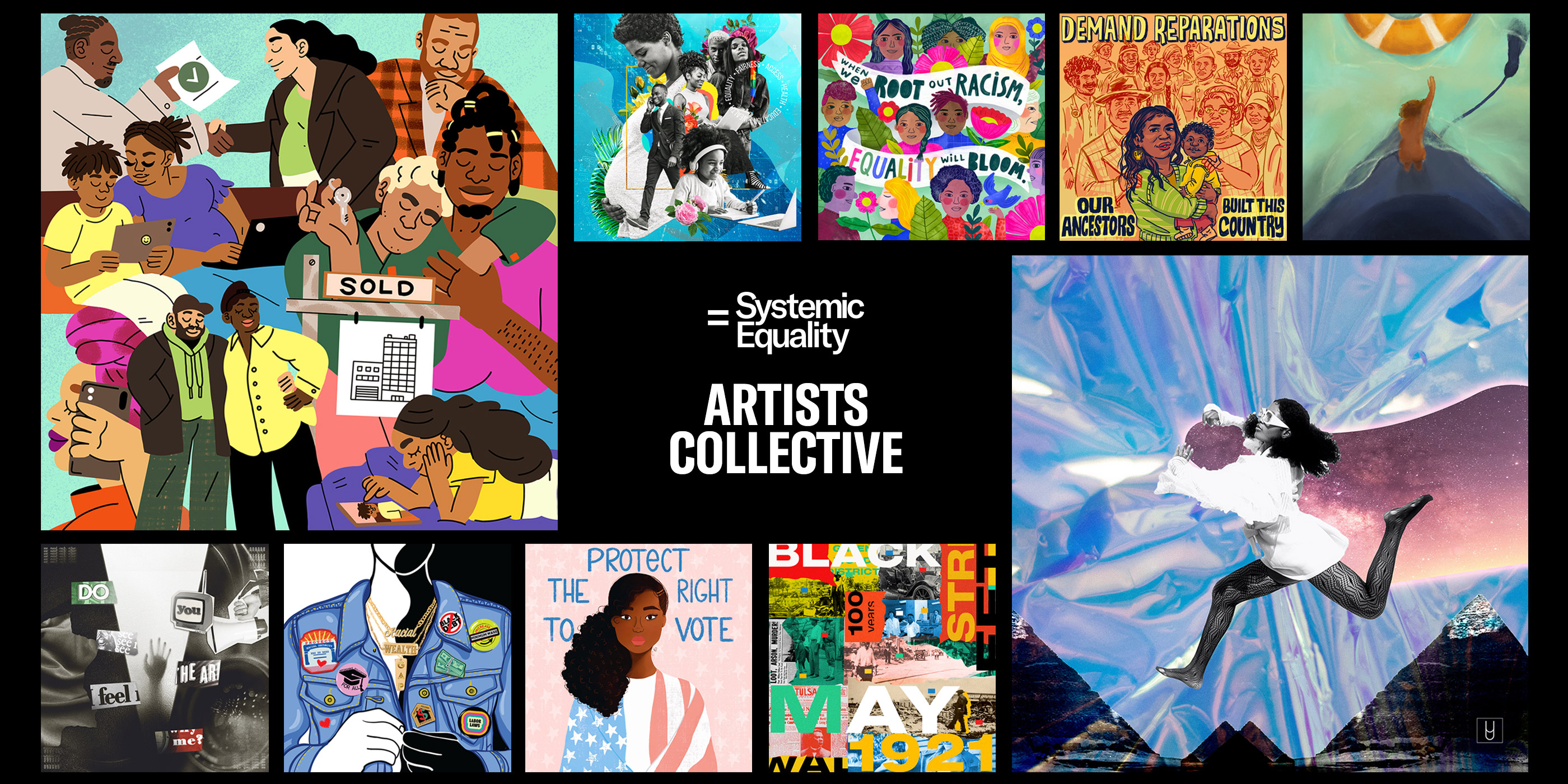 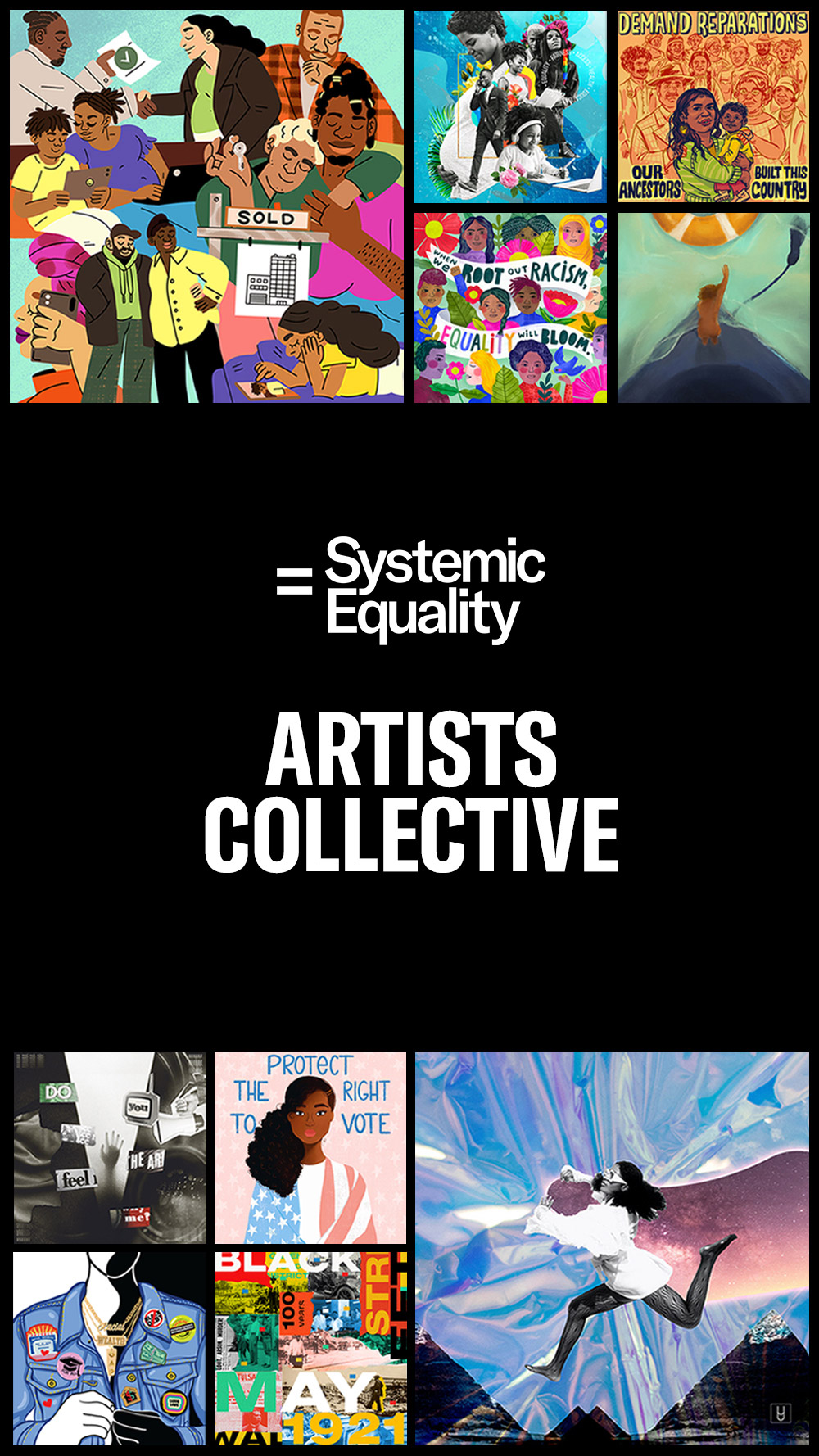 We worked with 10 visual artists to create images of what achieving Systemic Equality could look like — a vision of a more inclusive and equitable future for America. A future that roots out injustice, challenges our racist institutions, and ensures that every person can achieve their highest potential, unhampered by structural and institutional racism. We asked them to be bold in envisioning this reimagining of systems: from bridging the racial wealth gap, to reconciling our past, to ensuring our future expands access for all and empowers all communities. Their work is inspired by these results. Accompanying each piece is a personal statement from the artist about the world they envision on issues such as student debt, fair housing, voting rights, and more.

“A large step towards systemic equality is ensuring that high speed internet access is expanded out to the millions of people of color who don’t have access to it. My graphic is an idealistic portrayal of an America in which that basic necessity is provided to all — giving everyone real access to education, health care, financial growth, governmental support systems, and overall connections that can uplift and empower those who’ve been held back from years of systemic inequality.”

Greg is an award winning Haitian-Canadian visual designer, who started his design journey over 10 years ago. His passion for visual storytelling drives him to constantly create art and designs that weave together colors, textures, patterns, and typography to craft his vision. Greg hopes that his work, if nothing else, captivates, inspires, and provides insight to who he is and what he believes in.

The message is clear: this country was built on the thankless hard work and immense suffering of our ancestors. We demand reparations.

“The intersections of race, history, and ancestry have frequently been at the core of my work. The generational tradition of storytelling, looking through old photos and mapping the family tree have been powerful tools in discovering and understanding my ancestry and America’s history. ‘Demand Reparations’ is a continuation of these themes by conveying a shared history of Black and Indigenous communities. Though none of the figures depicted are based on anyone in particular, I wanted to create a specific yet familiar familial lineage that viewers could identify with in some aspect. The message is clear: this country was built on the thankless hard work and immense suffering of our ancestors. We demand reparations.”

Sophia Zarders (she/they) is an illustrator, comic artist, and independent zine publisher from Long Beach, California. Their work has been published by HarperCollins, The Nation, PRISM, Fiyah Literary Magazine and Razorcake Magazine. They’ve been commissioned by the Ella Baker Center for Human Rights, SaveArtSpace, Forward Together, and the Arts Council of Long Beach. In 2018, they exhibited their first solo show at Somos Gallery in Berlin, Germany. Sophia is currently pursuing their MFA in Visual Art from Emily Carr University of Art & Design in Vancouver, British Columbia.

“I imagine inequality and racism as weeds with roots burrowing deep into our country’s foundation. This piece highlights a future where we dig out and destroy the roots of injustice, allowing a more beautiful country to bloom for every American.”

Jade Orlando is a Black biracial illustrator working in Atlanta, Georgia. Her illustrations are featured in books such as Generation Brave, Hey You! and the Activists Assemble series. In addition to book illustration, her art can be found on products ranging from greeting cards to calendars. Jade lives with her husband, four cats, and a Greyhound named Petra. When she’s not illustrating, you can usually find her curled up with her pets and a really good book.

“Equity can be configured when accessibility is finally given. People have the human right to obtain and experience the freedom they have been promised.

Accessibility dismantles the pillars that barricade our communities from experiencing progression and healing.

Accessibility dismantles the pillars that barricade our communities from experiencing progression and healing. Beyond the endless cycle of disconnection, people can finally see their lives at true value and being to see communities flourish. This change would offer us the opportunity to build various aspirations and resources to secure a sturdier foundation for everyone.”

“Do my loved ones truly see me? Do they hear me? Do they feel me? Caught in the crossfire between my white family and friends and my Blackness, I often feel lost in the void.

This work is a natural way for me to communicate these sentiments. Harsh lines and contrast show the differences we have, but the shared range of values recognize that reconciliation is still within reach. The only colors in the piece, green and red, hearken back to our roots in the Pan-African flag. Texture bursts throughout, indicating the gritty nature of the work we’ve done and have yet to do.

Taking broken fragments and piecing them together to make something captivating, I show that the sometimes confused and complicated feelings we have are valid and worthy of being heard.”

Graduating in 2015 from Missouri Southern State University with a BFA in graphic design, Kahlief Steele finds ways to use his design skills to solve problems for a variety of clients, including large businesses, nonprofits, friends, and family. Having been raised by a white family, he has a deep longing for knowledge about his heritage. As such, every February, he amasses a trove of information related to Black History and publishes art to educate those who are unfamiliar. In the summer following the murders of George Floyd, Breonna Taylor, and Ahmaud Arbery, he hosted a Q+A session to foster conversation with those who were unsure of the next steps to take. He continues to create work that inspires others to greater understanding and to take action.

“I created this piece to emphasize the importance of protecting voting rights for everyone. I wanted to illustrate something to show that in order to fight democracy and equity, we have to protect voting rights. The stars in the background represent the states, as they are the ones that are currently trying to pass laws, at an alarming rate, to suppress voting rights, and the flag represents the rights that we are trying to protect and expand.”

Nadia Fisher is a children’s book and freelance illustrator based out of Washington, D.C. striving to normalize inclusion in children’s books and the illustration world. A lot of her art focuses on social justice, and Nadia hopes to encourage people to find their voice and show up for others.

“I created a design about the Tulsa Race Massacre. There was a thriving Black community in the U.S.! There was a successful Black community in the U.S. but, of course because, ‘Black people aren’t supposed to own anything’ they didn’t let it survive. This is another incident I feel should have been taught in schools abroad, especially African countries, but unfortunately wasn’t for whatever reason — I personally never learned about it until I moved here. Despite all that has happened to all Black people around the world, be it slavery or colonization, there has always been a dire need to take things away from us. Things that we have ‘owned;’ natural resources on our land, and this same mindset caused the Greenwood District of Tulsa, Oklahoma to be raided and destroyed for NO REASON AT ALL.”

Daniella Uche-Oji is a designer and storyteller based in Los Angeles, California. She was born in Houston, Texas and raised in Lagos, Nigeria. Her obsession for storytelling and technology drove her to becoming a designer. She is skilled at graphic and motion designs that tell stories she didn’t get to hear earlier in her life. Her designs are largely inspired by culture, music, fashion, and technology.

“What would our society look like for Black and Indigenous people of color if systemic racism no longer thrived? Drawing from a video recording of Nina Simone back in 1968 being asked ‘what is freedom to you?’ the artist was inspired to convey her response through the medium of digital collage. Simone states that freedom to her meant ‘absolutely no fear!’ With this piece, the artist explores what true freedom would look like for her people when absolutely nothing is hindering us, including fear, and we are able to live our truly authentic lives.”

With this piece, the artist explores what true freedom would look like for her people when absolutely nothing is hindering us, including fear.

Alexa Lima is an interdisciplinary artist who resides in Marietta, Georgia with her husband, two step-kids, a dog named Zelda, and a cat named Benny. Creating movement through the lens of minimalism is the constant idea that she aims to convey through her work, and centers her design ethos around illuminating that which has been cast aside throughout time. Currently, she is running Ulterior Studio, self-publishing short-run zines, and trying not to consume all the pastries, all the time.

“This illustration depicts the collaboration it takes across policymakers, institutions, and individuals to close the racial wealth gap. There are many symbolic references including a nod to the many pins and bumper stickers that surface during social movements. The image is layered on a flat black and white divide with all-American denim on both sides. On the denim jacket there are several pins and patches highlighting a few solutions. Lastly, the closure of the jacket represents possibility for a better future, a real and tangible shift to equal opportunity for all.”

Justine Swindell is a multidisciplinary artist based in Washington D.C. In her neo-pop style she tells visual stories of city life, cultural identity, and social change.

“This piece represents the fear and overwhelming feeling of having student debt. It’s like being lost at sea, helpless with nothing supporting you but your cap. A life preserver enters the scene literally saving you, because at this point student loans are loans paid off for life.”

Nicole Abrokwa is a multidisciplinary artist. Her work pulls from her life experiences, whether that be her Ghanaian heritage, her childhood memories, or everyday life. Her work puts focus on human emotions and capturing moments of closeness. Over the years, Nicole has worked on honing her skills in various mediums ranging from digital animations to traditional paintings. When not creating, you can find her unsuccessfully attempting to grow tomatoes and starting another book only for it to be left unfinished.