Colleges and Universities Have a Racial Profiling Problem 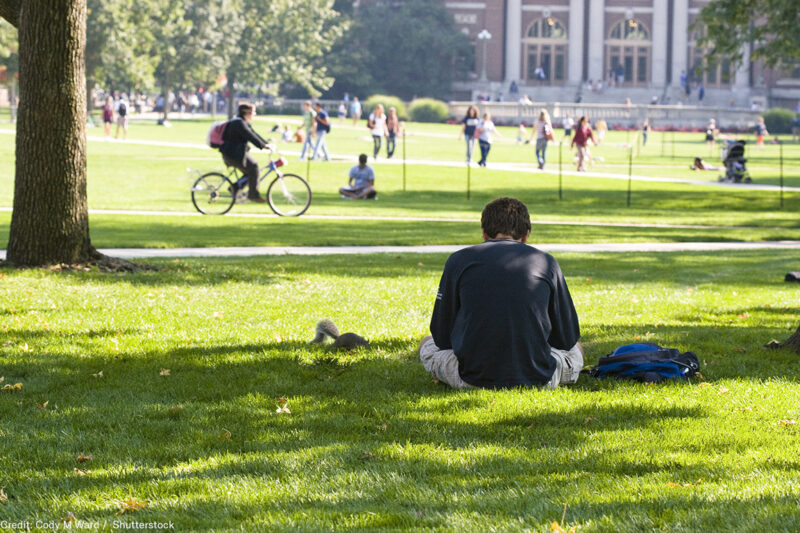 We have seen it again and again: A Black or brown person is sitting in a Starbucks, barbequing in a public park, touring a college they hope to attend, or sitting down in the college they already attend. Then someone calls the cops on them for looking like they “don’t belong” or are “out of place.”

These calls target former White House staffers and longtime university employees just as aggressively as they target any other person of color. And when the police arrive, they often enforce the caller’s biases, leaving people of color traumatized by the experience of being detained, interrogated, or even arrested solely for occupying space while Black or brown. As Lolade Siyonbola, a Yale graduate student, recently said in response to having the police called on her for taking a nap, “We’re constantly having to prove that we’re allowed to be where we are, that we have permission — that we have freedom papers.”

Police keep acting as the instruments of biased 911 callers for two reasons: first, the bias-driven assumptions and cultural overreliance on police intervention of the people who call the police, and second, the failure of law enforcement agencies to adopt policies and training that help them avoid being used to weaponize the biases of those who call them.

Programs that vaguely advise people to act on poorly articulated feelings that someone is out of place — most notably the “See Something, Say Something” programs that have proliferated since 9/11 — often result in race-based “suspicious person” calls and put an official stamp of approval on these biases. But even without such ill-advised programs, the BBQ Beckies and racist ranters of the country will keep calling the cops on people of color for simply living their lives.

That’s why police need to adopt better policies and training to address these calls when they come in. But there has been little formal guidance on how to do this. To fill that void, the ACLU has launched a campaign to adopt our model policy for screening and responding to bias-based calls in the places that have both been a hotbed of weaponized bias and which have the least excuse for inaction: predominantly white college and university campuses that operate their own police and security forces.

Living while Black on Campus: A Roadmap for Student Activism

Predominantly white colleges and universities tend to identify themselves as inclusive communities that seek to attract Black and brown students. But if they refuse to adopt policies that protect their own Black and brown students from weaponized bias, they aren’t just being hypocritical. Instead, they are making it crystal clear which students won’t be able to live as full members of the college community and which students will constantly have their place in this community questioned or threatened by campus authorities.

But schools should review their policies and practices before they make headlines or hear from the ACLU. That’s why we are making this model policy publicly available along with an advocacy toolkit and other resources for student activists. Our goal is to empower students of color to push their college and university administrators for change — and to ensure that these institutions practice what they preach on diversity and equity.

Black and brown people should be able to trust the police to protect them when needed while leaving them free to live their daily lives. We hope this campaign will be a first step toward making that the reality in campuses and communities across the country.

Living while Black on Campus: A Roadmap for Student Activism