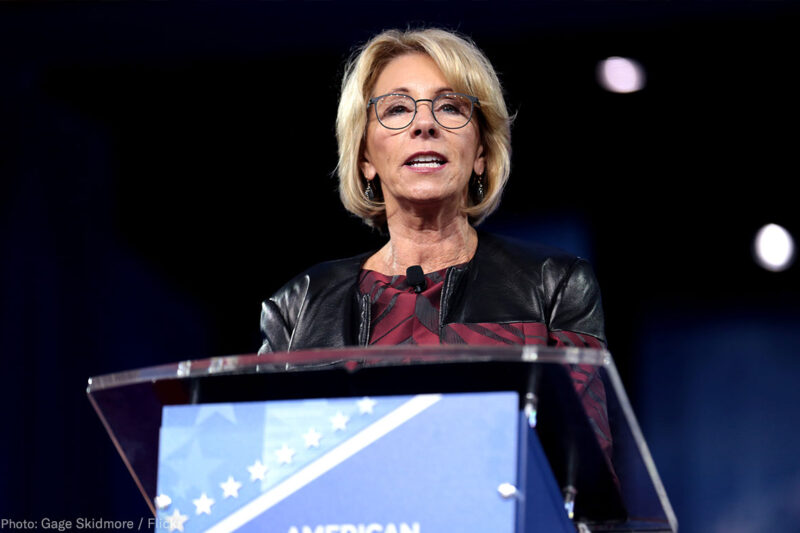 The Trump administration on Tuesday rescinded federal guidance, including guidelines created in 2011 to promote racial diversity in higher education and end the growing racial isolation in K-12 classrooms. The move reflects the administration’s latest attempt to retreat on the important progress made since Brown v. Board of Education prohibited school segregation 64 years ago and despite Supreme Court rulings protecting affirmative action.

The move is particularly disturbing because the guidelines, put in place by the Obama administration, did not break new ground. Instead, they provided a thoughtful and clear explanation of two Supreme Court cases governing the use of race in K-12 education and higher education. Those two cases, Parents Involved v. Seattle Schools and Grutter v. Bollinger, recognized the importance of promoting diversity in learning environments and established parameters for doing so. While their ruling still stands today, DeVos’ announcement signals a dangerous hostility from the Trump administration towards the idea that promoting racial diversity is in the best interest of America.

The guidance documents were not controversial, as they acknowledged a problem that both education experts and the courts have long recognized: Too many of our nation’s classrooms are racially and economically isolated, and that this isolation is only increasing among students. The guidance also outlined the Supreme Court’s explicit recognition that promoting diversity and avoiding racial isolation in schools are not only compelling governmental interests but also among the nation’s highest priorities. The guidance demonstrated the various ways that efforts to create diverse student bodies in schools and universities can be done effectively, fairly, and in compliance with the existing law in order to improve the quality of education for all students.

Given that the guidance served to accurately describe the current state of the law, the decision to rescind them can only be seen as a repudiation of the idea that diversity is a desirable and achievable goal in education. This is dangerous, considering research shows that school segregation is getting worse. And the impacts of desegregating schools are well-documented, including improved academic performance, reduced involvement in the criminal justice system, and better rates of employment. Revoking the guidelines is a decision that risks the reintroduction of division and segregation in our schools and seeks to pull us back to a time when schools were segregated and opportunity was allocated along racial, ethnic, and economic lines.

Fortunately, no action by the Trump administration can alter the fact that the law is defined by the Supreme Court decisions that the 2011 guidance accurately described. Under those cases, schools, colleges, and universities can take the steps necessary to provide the high quality, diverse education that all of the nation’s students deserve. By continuing to take those steps, the educational institutions will be taking up the mantle so shamefully dropped by the administration today.