Does the Second Amendment Protect Only White Gun Owners? 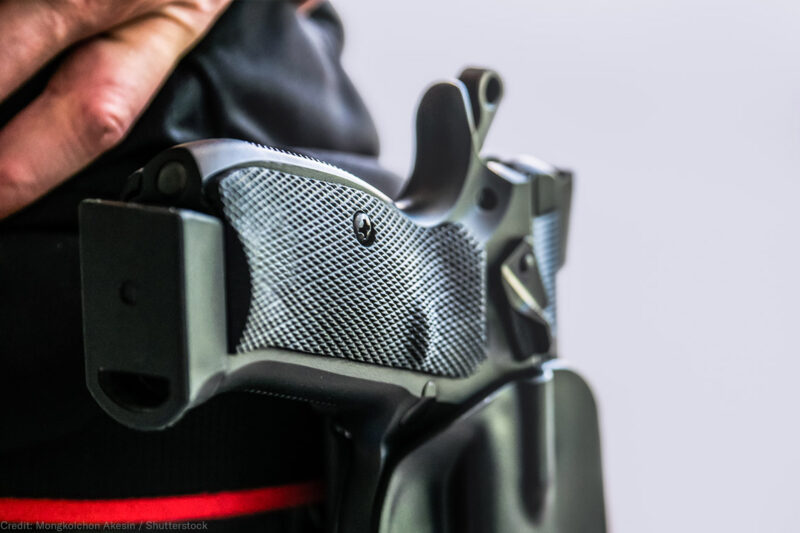 The most common refrain from gun rights supporters in the wake of mass shootings or other gun violence is that the best response to a bad guy with a gun is a good guy with a gun. Yet in recent weeks, we have seen two Black men, a group already disproportionately victimized by police use of lethal force, shot and killed by police while protecting those around them with guns they were legally allowed to carry.

It turns out that not only are unarmed African-Americans more likely to be shot, but those who seek to follow the advice of the National Rifle Association and others to arm themselves may only make themselves more vulnerable. It is especially troubling that gun rights proponents have largely been silent when police kill Black people for lawfully using their guns.

For example, the NRA and President Trump — despite their embrace of the social media bullhorn — have not condemned the police for killing unarmed Black people. Moreover, they have yet to denounce police officers who kill Black people for possessing guns they’re legally entitled to carry.

The police killings of legally armed Black citizens, and the refusal of leading gun-rights proponents to sincerely defend the victims, raises the same troubling question that both Martin Luther King Jr. and the Black Panther Party also confronted when they tried to exercise their rights to bear arms: In practice, do Second Amendment rights protect only white gun owners?

The most recent example is Emantic Fitzgerald Bradford, Jr., a former Army recruit and a licensed firearm owner in Alabama, an open-carry state. The police department has yet to release the video of the incident, but we now know that Bradford was carrying his gun at a mall on Thanksgiving night when someone else began shooting — the kind of situation where gun proponents often claim that being armed will save the day.

Bradford responded by drawing his gun and “directing shoppers to safety,” reported The New York Times. But when the police arrived, witnesses say they shot him “within milliseconds.” The police department initially asserted that Bradford was the mall shooter and lauded his killer as a hero.

But it was wrong.

The department has since admitted this statement was “not totally accurate” in at least two ways. First, the officer shot the wrong man, and the mall shooter was actually still at large. Next, police admitted that Bradford had not “brandished” the gun but simply had it in his hand when officers approached. An independent autopsy has revealed that Bradford was shot three times from behind.

President Trump has had nothing to say about this tragedy. The most to come from the NRA is spokesperson Dana Loesch tweeting her surprise that the police have refused to release the bodycam footage. But even that statement took more than a week. As Black Alabamans and racial justice allies protested in the days following Bradford’s death, the organization said nothing about the reality of race in America or about how Black men are denied the right to bear arms that others enjoy.

Instead of acknowledging Bradford, a real-life good guy with a gun, it tweeted a quote from its executive vice president, Wayne LaPierre: “To preserve our values and protect our freedom, America needs the good guys to step up like never before.”

And Bradford’s death isn’t even an isolated incident.

Just two weeks prior, police officers killed Jemel Roberson, a Black security guard and registered gun owner, who responded when several men began shooting at the Illinois nightclub where he worked. When the police arrived, Roberson was doing his job: He legally had his gun out and had subdued one of the men with his knee in the man’s back.

The officers shot and killed Roberson, even as witnesses warned them he was a security guard. Roberson has widely been lauded as a hero, and even the police department later conceded Roberson was “a brave man who was doing his best to end an active shooter situation.”

But again, gun rights proponents have been quiet.

When Philando Castile was killed in 2016 after telling the police officer who stopped his car that he had a gun and a license to carry one — the recommended procedure for announcing the presence of a gun to an officer — gun rights advocates were again silent. The NRA said nothing about Castile’s case for more than a year.

When Loesch finally did offer a statement, she stopped short of criticizing the police officer, cryptically saying that “… there were a lot of things that I wish would have been done differently.” She suggested that an NRA Carry Guard card could have prevented his killing. But the officer shot Mr. Castile while he was reaching for his driver’s license and registration, so it’s not clear how having an NRA card in his wallet could have possibly helped.

This equivocation is unprincipled. Whatever one’s view of the appropriate scope of the Second Amendment, it ought to extend to all equally, without regard to race.