Is the FBI Setting the Stage for Increased Surveillance of Black Activists? 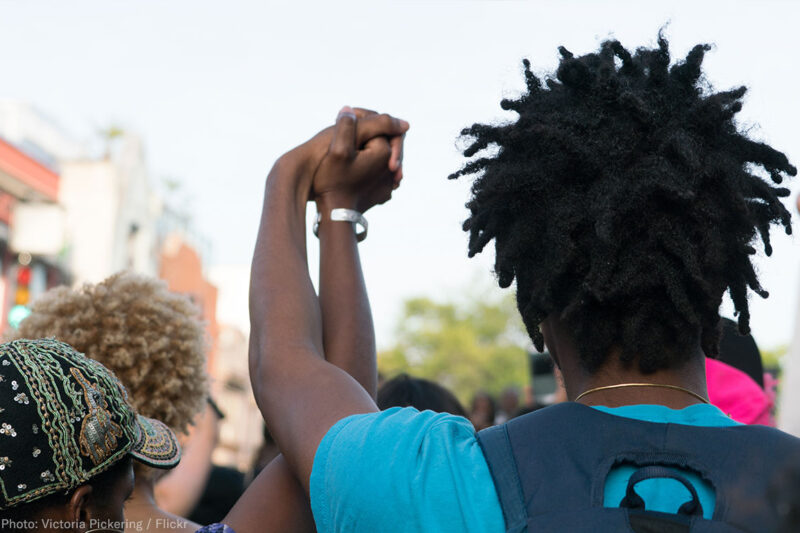 A recently leaked FBI “Intelligence Assessment” contains troubling signs that the FBI is scrutinizing and possibly surveilling Black activists in its search for potential “extremists.”

The report, which the FBI’s Counterterrorism Division prepared, identifies what it calls “Black Identity Extremists” as security threats. Their “perceptions of police brutality against African Americans … will very likely serve as justification” for violence against law enforcement officers, the report claims. Today, the ACLU filed a Freedom of Information Act request with the Center for Media Justice seeking other records regarding the FBI’s surveillance of Black people on the basis of a supposed shared ideology, including records using the term “Black Identity Extremists.”

The report is disturbing on several levels, starting with the label “Black Identity Extremist.” Its definition of the term is so confusing as to be unintelligible:

“The FBI defines black identity extremists as individuals who seek, wholly or in part, through unlawful acts of force or violence, in response to perceived racism and injustice in American society and some do so in furtherance of establishing a separate black homeland or autonomous black social institutions, communities, or governing organizations within the United States.”

What seems to be a made-up term raises concerns that the FBI created the designation to enhance government scrutiny of Black activists, including people involved in Black Lives Matter, which some wrongly blame for incidents of violence and label a hate group. By focusing on ideology and viewpoint in defining what constitutes a so-called “Black Identity Extremist,” the FBI is spending valuable resources to target those who object to racism and injustice in America.

The report is also flawed in its conclusions and methodology. Any violence against law enforcement officers is unacceptable, but the FBI’s focus on supposed “Black Identity Extremists” appears misplaced. Studies show that attacks against police officers are extremely rare and that white men carry out the overwhelming majority of those attacks.

In addition to missing that context, the report offers no evidence to support its assessment that “Black Identity Extremists” are a threat because they supposedly share a violent ideology. Instead, the FBI’s conclusion is premised on a description of six separate violent incidents and the “key assumption” that those incidents were ideologically motivated. In other words, the report appears to assume its own core conclusion. The report even contradicts itself by acknowledging that the six incidents appear to have been “influenced by more than one ideological perspective.”

The report is yet another indication that the FBI thinks it can identify security threats by scrutinizing people’s beliefs and speech. In making its assessment, the FBI relied on individuals’ use of social media, including who they associated with, what search terms they used, and what content they liked. But there’s nothing wrong with having radical or “extreme” ideas, and evidence shows that the overwhelming majority of people who hold radical beliefs do not engage in or support violence.

The danger, of course, is that Black activists now have even more reason to be concerned that the law enforcement will surveil and take action against them for engaging in constitutionally protected speech. In an interview with the Guardian, one BLM activist said the “Black Identity Extremist” classification would “criminalize anyone who is already in the movement.” This is a concern that even an international human rights expert from the U.N. expressed when reporting on the chilling effects of police practices against protesters. Such targeting of Black activists also throws open the door to racial profiling.

The FBI’s history gives Black activists plenty of cause for concern. In the 1960s, the FBI conducted extensive surveillance of those it deemed “Black Extremists” and “Black Nationalists” under the covert COINTELPRO program. The FBI has been “mapping” racial and ethnic communities in the United States, including the Black population in Georgia, based on crude and false stereotypes about particular communities’ propensity to commit certain crimes. That mapping included scrutiny of protests against police killings.

And FBI domestic terrorism training presentations conflate examples of armed resistance, or armed self-defense, by older organizations like the Black Panthers and the Black Liberation Army with beliefs expressed by various modern groups to suggest, without evidence, that these latter-day groups pose a similar threat. More recently, Department of Homeland Security records from 2014 and 2015 show that government officials trolled social media accounts to map and collect information on Black Lives Matter protests and supposedly related events.

The FBI’s recent “Intelligence Assessment” is yet another example of using “domestic terror” and “extremism” as a smokescreen for silencing constitutionally protected speech and unfairly targeting civil rights activists through surveillance. By conjuring this category of “Black Identity Extremists,” the FBI dangerously equates domestic extremist movements that are actually on the rise, like white supremacists, with one that looks near nonexistent.

The public needs to know more about the FBI’s activities related to what it calls “Black Identity Extremism.” Obtaining the agency’s records on these activities is one step toward protecting the free speech and privacy rights of Black activists.