Gold Chains: The Hidden History of Slavery in California 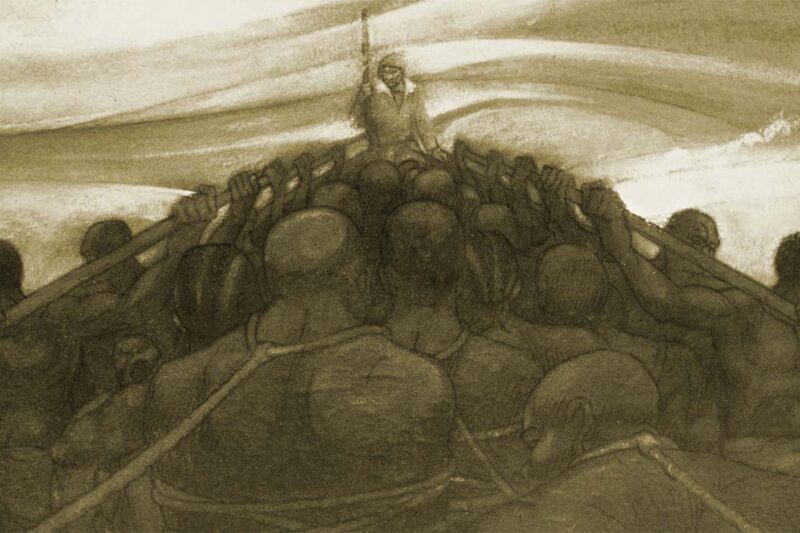 Through narratives, public records, archival materials, and images, Gold Chains: The Hidden History of Slavery in California debunks California’s unblemished brand as exclusively “liberal,” “innovative,” and “progressive,” correcting it with facts of a history mired in racism, white supremacy, and violence.

This is a cross-post from the ACLU of Northern California.

There is a story we tell ourselves about being American. Much of it is a lie. Two dates that students throughout the country are required to memorize to inform an American identity are 1492, when Columbus supposedly “discovered” America, and 1776, when the United States claimed sovereignty from England and through the Declaration of Independence declared: “We hold these truths to be self-evident, that all men are created equal.” If we’re honest, we’ll admit that the “all men” in that catchphrase didn’t include African Americans, Native Americans, and women, and Columbus didn’t discover anything. He got lost on a voyage to India and when he docked in the Caribbean and saw people, he called them Indians and proceeded to disavow them of their humanity. Not embedded in the American psyche as a date to remember is another equally seminal year, 1619, which commonly marks the inception of America’s original sin—the 400th year since enslaved Africans arrived in Virginia and were sold to colonists beginning centuries of bondage and servitude.

In the period leading to this anniversary, several notable news outlets observed its significance on a national level. But closer to home, the ACLU of Northern California wanted to explore California’s place in the nation’s history of forced servitude, unpaid labor, and human degradation. The significance of this local history is undeniable. It has shaped California’s complex racial character and planted the seeds of white supremacy that were sown in this country; seeds that bore ripe and poisoned fruit, the manifestation of which still exists today. In an effort to comprehensively explore this obscured racial history and the many legal battles it spawned, the ACLU of Northern California has launched a project entitled: Gold Chains: The Hidden History of Slavery in California.

The mission of Gold Chains is to uncover California’s hidden slavery history by lifting up the voices of courageous African American and Native American individuals who challenged their brutal treatment and demanded their civil rights, inspiring us with their ingenuity, resilience, and tenacity. We aim to expose the role of the courts, laws, and the tacit acceptance of white supremacy in sanctioning race-based violence and discrimination that continues into the present day. Through an unflinching examination of our collective past, we invite California to become truly aware and authentically enlightened.

Acceptance of this invitation requires humility and a strong disposition for hard truths. The bleak and brutal story of slavery in California pre-dates statehood with the incursion of Europeans in the 1700’s who enslaved the Native population, seized land, raped women, infested tribes with disease, and force-fed Catholicism. California was designated a “free state” in the Compromise of 1850. The proverbial image of black people as chattel laboring in cotton fields stalked by an overseer gave way to a Pacific Coast version with similar conditions. Like “King Cotton,” the commodity that drove the slave trade on the eastern seaboard, the Gold Rush era in California during the 1800s provoked the persistent dehumanization of black people, and simultaneously forced Native people off their remaining land, destroying their ecosystems for generations to come. These consequential historical markers are hidden from state lore and school curricula but offer concrete examples of California’s complicity in racial tyranny. For instance, the state legislature passed the Fugitive Slave Law in 1852 that legalized the deportation of free or previously enslaved black people back to the south as slaves for seeking economic and personal freedom.

Through narratives, public records, archival materials, and images, Gold Chains: The Hidden History of Slavery in California debunks California’s unblemished brand as exclusively “liberal,” “innovative,” and “progressive,” correcting it with facts of a history mired in racism, white supremacy, and violence. It also reinforces the integrated advocacy that the ACLU of Northern California practices daily. Our efforts to take on critical issues and sometimes unpopular positions in order to advance civil rights and civil liberties exemplifies our commitment to equal justice for all. Confronting the misdeeds of our collective past enables us to secure a more just future for generations to come.