H.R. 40 Is Not a Symbolic Act. It’s a Path to Restorative Justice. 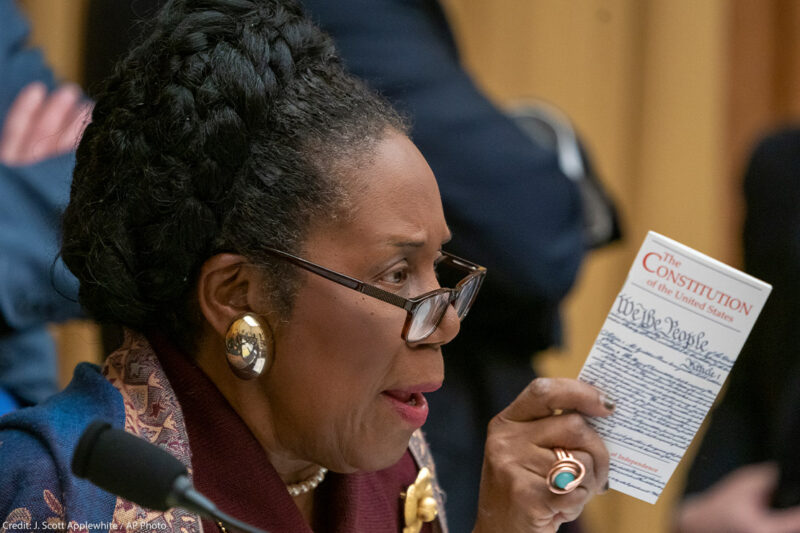 The conversation surrounding reparations is underway and the U.S. government must take a leading role.

For nearly three decades, my former colleague Rep. John Conyers of Michigan would introduce H.R. 40, legislation seeking to establish a commission to study and develop reparation proposals. Though many thought it a lost cause, he believed that a day would come when our nation would need to account for the brutal mistreatment of African Americans during chattel slavery, Jim Crow segregation, and the enduring structural racism endemic to our society. With the rise and normalization of white supremacist expression during the Trump administration, the discussion of H.R. 40 and the concept of restorative justice have gained more urgency, garnering the attention of mainstream commentators and illustrating the need for a national reckoning.

Slavery is America’s original sin, and this country has yet to atone for the atrocities visited upon generations of enslaved Africans and their descendants. Moreover, the mythology built around the Civil War has obscured our discussions of the impact of chattel slavery and made it difficult to have a national dialogue on how to fully account for its place in American history and public policy. H.R. 40 is intended to create the framework for a national discussion on the enduring impact of slavery and its complex legacy to begin that necessary process of atonement.

The designation of this legislation as H.R. 40 is intended to memorialize the promise made by Gen. William T. Sherman, in his 1865 Special Field Order No. 15, to redistribute 400,000 acres of formerly Confederate-owned coastal land in South Carolina and Florida, subdivided into 40-acre plots. In addition to the more well-known land redistribution, the order also established autonomous governance for the region and provided for protection by military authorities of the settlements. Though Southern sympathizer and former slaveholder President Andrew Johnson would later overturn the order, this plan represented the first systematic form of freedmen reparations.

With the withdrawal of Union troops from the South in 1877, the promise of Reconstruction proved short-lived, and over the next century and a half, the Black Codes would morph into Jim Crow segregation and federal redlining and the war on drugs and mass incarceration and racism in policing and underfunded schools — injuries not confined solely to the South. These historical injustices connect through a web of government policies that have ensured that the majority of African Americans have had to, in the words of President Obama, “work twice as hard as anyone else if you want to get by.” Black America’s unemployment rate is more than twice that of white America’s. Black families have just one-sixteenth of the wealth of white families. Nearly one million Black people — mostly young men — are incarcerated across the country. Though remote in time from the period of enslavement, these racial disparities in access to education, health care, housing, insurance, employment, and other social goods are directly attributable to the damaging legacy of slavery and racial discrimination.

Since its introduction, H.R. 40 has spurred some governmental acknowledgment of the crime of slavery, but most often the response has taken the form of an apology. Even the well-intentioned commitments to examine the historical and modern-day implications of slavery by the Clinton administration, however, fell short of the mark and failed to inspire substantive public discourse. For many, it was not until The Atlantic published Ta-Nehisi Coates’ “The Case for Reparations” that the mainstream public began to reckon with, or even consider, the concept of reparations.

Though the federal government has been slow to engage on the issue of reparations, individuals, corporations, and other public institutions have engaged the discussion out of both necessity and conscience. In 1994, a group of California plaintiffs brought suit against the federal government, and by 2002, nine lawsuits were filed around the country by the Restitution Study Group. Though litigation has yielded only mixed success in court, a serious foundation was laid for alternative forms of restitution. For example, in 2005, J.P. Morgan & Company tried to make amends for its role in the slave trade with an apology and a $5 million, five-year scholarship fund for Black undergraduates in Louisiana. In 2008, the Episcopal Church apologized for perpetuating American slavery through its interpretation of the Bible and certain dioceses have implemented restitution programs.

In 2003, Brown University created the Committee on Slavery and Justice to assess the university’s role in slavery and determine a response. Similarly, in 2016, Georgetown University apologized for its historical links to slavery and said it would give an admissions edge to descendants of slaves whose sale in the 19th century helped pay off the school’s debts. These are only a few examples of how private institutions have begun reckoning with their past records. I expect that a growing number of institutions will be forced to examine their histories of discrimination, if for no other reason than increasing public scrutiny will force their history to light.

Since my reintroduction of H.R. 40 at the beginning of this Congress, both the legislation and concept of reparations have become the focus of national debate. For many, it is apparent that the success of the Obama administration has unleashed a backlash of racism and intolerance that is an echo of America’s dark past that has yet to be exorcised from the national consciousness. Commentators have turned to H.R. 40 as a response to formally begin the process of analyzing, confronting, and atoning for these dark chapters of American history.

Even conservative voices, like that of New York Times columnist David Brooks, are starting to give the reparations cause the hearing it deserves, observing that: “Reparations are a drastic policy and hard to execute, but the very act of talking and designing them heals a wound and opens a new story.” Similarly, a majority of the Democratic presidential contenders have turned to H.R 40 as a tool for reconciliation, with 17 cosponsoring or claiming they would sign the bill into law if elected.

Though critics have argued that the idea of reparations is unworkable politically or financially, their focus on money misses the point of the H.R. 40 commission’s mandate. The goal of these historical investigations is to bring American society to a new reckoning with how our past affects the current conditions of African Americans and to make America a better place by helping the truly disadvantaged. Consequently, the reparations movement does not focus on payments to individuals, but to remedies that can be created in as many forms necessary to equitably address the many kinds of injuries sustained from chattel slavery and its continuing vestiges. To merely focus on finance is an empty gesture and betrays a lack of understanding of the depth of the unaddressed moral issues that continue to haunt this nation.

While it might be convenient to assume that we can address the current divisive racial and political climate in our nation through race-neutral means, experience shows that we have not escaped our history. Though the civil rights movement challenged many of the most racist practices and structures that subjugated the African-American community, it was not followed by a commitment to truth and reconciliation. For that reason, the legacy of racial inequality has persisted and left the nation vulnerable to a range of problems that continue to yield division, racial disparities, and injustice.

By passing H.R. 40, Congress can start a movement toward the national reckoning we need to bridge racial divides. Reparations are ultimately about respect and reconciliation — and the hope that one day, all Americans can walk together toward a more just future.