It Is Time to Get Real About School Policing 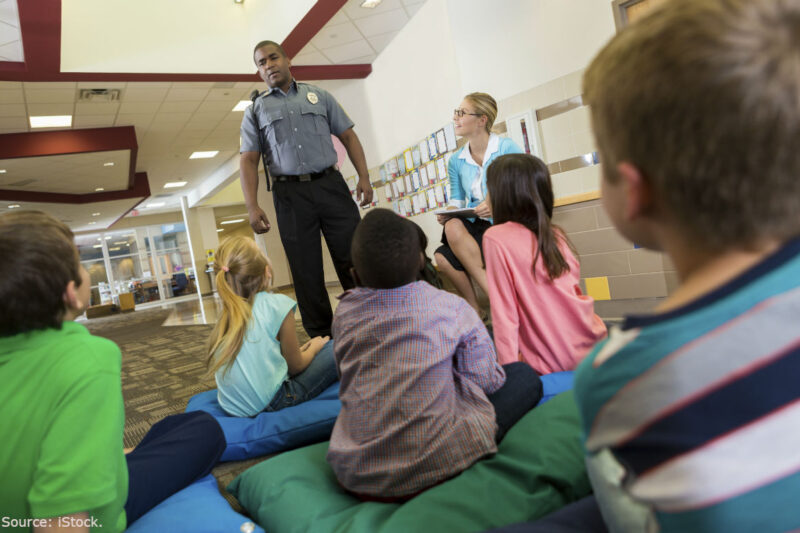 Interactions between young people and police don’t occur just on the streets of America — they’re happening in our nation’s K-12 schools, too. Increasingly police have become “embedded” in schools, in many cases working there full-time. Many are considered school staff and have daily authority over students, even in situations that have traditionally been seen as everyday disciplinary matters.

Little is known about the day-to-day practices of school-based police and about the rules under which they operate. Nobody — not even the federal government — knows how many sworn law enforcement officers (and of what type) are assigned to schools. What we do know should give us pause for concern.

Black students are 2.3 times as likely to receive a referral to law enforcement or be subject to a school-related arrest as white students. And Black and Latino students are more likely to go to schools that have resident police no matter the level of crime in the surrounding neighborhood or misbehavior at the school.

Whether they are called school police officers, school resource officers, or school safety agents; carry the same weapons as a regular cop; serve in uniform; are friendly or aggressive; or are unionized; these officers have the power to arrest, detain, interrogate, and issue criminal citations to students.

It is time to rethink the role police play in our schools.

The boundaries between police and educators have become less clear — who decides what when interacting with students — and the degree of collaboration between police and educators has increased in the past two decades. Often when controversies arise, police say, “Don’t blame us. We’re here because the school asked us to be here.” Educators say, “We cannot control what police do in our school — that’s a law enforcement matter.”

Embedding such officers has real consequences for students and for the culture of schools. One popular (and growing) type of school policing, the School Resource Officer (SRO) program, blurs those lines and accountability even more. SROs are described as mentors and classroom presenters as well as cops, a so-called “triad” model of school policing. In fact, this is a big selling point of the program. School policing is presented as a form of community policing — without regard to the costs.

The activities of school-based police officers (especially SROs) are typically less regulated by formal policies than those of officers that are called to a school from the outside. Can a school-based officer be permitted to question a student without reading him or her rights? What about when an SRO is “mentoring”? What about seeing a student’s records without the permission of the student or parent? When must an SRO get a search warrant?

Little is known about the day-to-day practices of school-based police and about the rules under which they operate.

What can a student or parent do when things go wrong, such as when a student is sexually harassed, roughed up, or verbally provoked by school security? Students and their parents find it difficult to exercise the most basic of rights, that is to the extent to which they have any or know what they are.

In one Pennsylvania district, school police review write-ups of students for a broad range of minor incidents, including ones in which police were not involved or called. Then they file charges against students in adult court — for things like “disorderly conduct.” In many cases, an administrator hands police the incident write-up and says, “Got anything you can charge this kid with.” From what we’ve seen, this type of discipline affects primarily Black students. These students have a record, which in Pennsylvania is not automatically expunged, for situations in which they weren’t even arrested.

Where police are considered full-time school staff, practices (and policies) vary widely, if there are formal policies at all. Few Pennsylvania districts have adequate formal policies that address these basic rights. In the past month, the federal government and a national coalition of parent and student advocates, however, have weighed in on how best to reform school policing. They take different approaches.

On September 8, the Obama Administration released a set of “rubrics” on the appropriate use of SROs in schools under which schools are encouraged to negotiate a memorandum of understanding with law enforcement and to make sure officers are trained. One of its stated goals is to reduce police involvement in routine and minor disciplinary matters. But student advocates, including the ACLU, have found that this goal is not achievable when cops are stationed in schools on a regular basis.

Two weeks later, the national Dignity in Schools Campaign released its policy recommendations, “Counselors Not Cops: Ending the Regular Presence of Law Enforcement in Schools.” DSC’s guidelines move the starting line so as to assume that police will not be embedded in schools on a regular or full-time basis — that law enforcement is not a part of the culture of schools. On those rare occasions when it is appropriate for police to enter a school building they should be strictly regulated. Instead, the focus is on creating safe schools by supporting student-centered resources, staff, and programs instead of funding law enforcement officers who claim to act as counselors.

This strikes me as the right balance — prioritizing counselors over cops, conversation over control.