The Legal System Has Failed Black Girls, Women, and Non-Binary Survivors of Violence 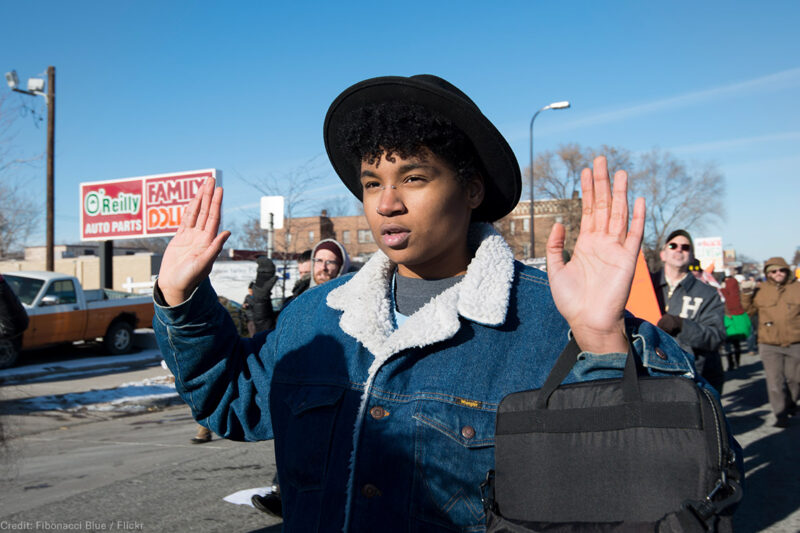 Following the airing of Lifetime’s six-part docuseries, “Surviving R. Kelly,” — which describes decades of emotional, physical, and sexual abuse he allegedly perpetrated against Black girls and women — many of Kelly’s fans and supporters continue to rally around the singer-songwriter and even place blame on his accusers for being “fast.”

When abuse occurs, they are less likely to be believed and supported. A report published by Georgetown Law Center found that “adults view Black girls as less innocent and more adult-like than their white peers.” Black girls are perceived to be more independent, more knowledgeable about sex, and in less need of protection.

The same perception follows them into adulthood. A juror from Kelly’s 2008 child pornography trial, where Kelly was acquitted, said that he did not believe testimony from Black women because of how they dressed and “the way they act.”

Because Black women and girls have historically been dehumanized, considered unrapeable, and left without legal recourse, they become easier targets for abuse and are more reluctant to come forward. Daniel Holtzclaw, a former Oklahoma City police officer convicted of sexual violence in 2015, specifically targeted low-income Black women because he thought they were less likely to be believed.

The silencing of and structural biases against Black women, girls, and non-binary people can have devastating consequences — including the incarceration of survivors themselves.

In 2004, Tondalo Hall was a 20-year-old mother of three when her abusive boyfriend injured two of their children. Tondalo was sentenced to 30 years for “failing to protect” her children from abuse, even though Tondalo did not injure her children and was not present when the abuse occurred. The actual abuser spent two years in jail and eight years on probation.

The ACLU of Oklahoma has sought post-conviction relief for Tondalo, but she remains behind bars — 15 years later. Data on failure-to-protect convictions in Oklahoma show that Black women are incarcerated for failing to protect at a rate of 214.1 percent, reflecting rampant racial and gender-biased policing.

When Black survivors of abuse defend themselves, they, too, are at risk of incarceration.

Cyntoia Brown was only 16 years old when she shot and killed a man who picked her up for sex. Cyntoia said that she feared for her life when the 43-year-old man took her back to his home and showed her his gun collection. At her trial, the prosecution argued that Cyntoia’s motive was robbery, not self-defense. Cyntoia was tried as an adult and sentenced to life in prison, with no chance for parole until she served 51 years. Earlier this month, Tennessee’s outgoing governor, Bill Haslam, commuted Cyntoia’s sentence after an extensive clemency campaign by local and national advocates. She will be released on parole in August after serving 15 years behind bars.

Alexis Martin was only 15 years old when she was accused of setting up a robbery that led to the death of her exploiter, a 32-year-old man who forced her into the drug and sex trade. Even though she was not directly involved in the death of her abuser, she was tried as an adult and sentenced to 21 years to life in prison in 2015. Advocates have pushed for the application of Ohio’s Safe Harbor law and for clemency. Former Ohio Gov. John Kasich did not include Alexis on his final list of commutations and pardons before the end of his term.

Although Cyntoia and Alexis are survivors of sexual violence and sexual exploitation, they were both tried as adults and funneled into the criminal legal system for actions directly related to their exploitation. Despite their age and circumstances, juries found them culpable, less innocent, and in need of less protection.

Black trans women and non-binary people are also incarcerated for surviving violence. Take CeCe McDonald, for example. One night in 2011, CeCe and her friends were confronted by a group of white men and women, who hurled transphobic and racist insults at them. An altercation ensued and in self-defense, CeCe accidentally stabbed one of her attackers in the chest. Despite facing multiple attackers, CeCe was the only person arrested that night.

She later accepted a guilty plea offer and was sentenced to 41 months in a Minnesota men’s prison. After a nationwide defense campaign, CeCe was released 19 months into her sentence. CeCe’s story illustrates the intersecting oppressions of misogynoir and transphobia.

While rape culture and misogyny pervade our society and impact all survivors of violence, it is clear that Black women, girls, and non-binary people face additional biases and are disproportionately met with severe punishment. Organizations such as Survived and Punished have been elevating the stories of criminalized survivors and advocating for their release. It is imperative that Black survivors receive the love and support necessary to heal and rebuild —not suspicion and a cage.